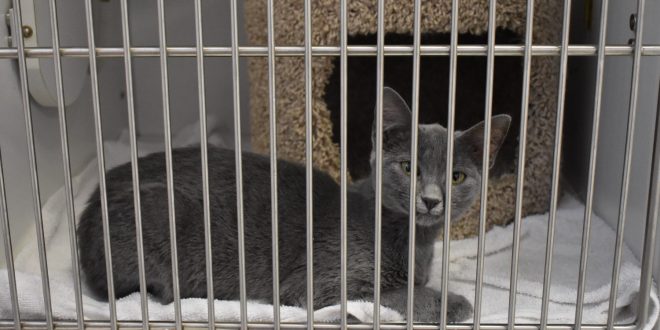 Haile’s Angels Pet Rescue has cages of adoptable cats in its lobby. Cats can easily get lost during preparations for a storm, local animal rescue employees say. (Brianna Moye/WUFT News)

In the days leading up to Hurricane Dorian’s then-forecast landfall in Florida, Angela Shore was even busier than usual. In between cutting down tree limbs in her yard, she took her two dogs and three cats to the vet to make sure their microchips were still working in case they got lost in the storm.

For nearly a decade, Shore, 56, has been running Gainesville Pet Finder, a Facebook page dedicated to reuniting lost pets in the Gainesville area with their owners. She operates the page by herself when she’s not busy with her day job as an information technology project coordinator for UF Health.

“It has evolved to something much bigger than planned,” she said, “and it’s better than I planned.”

Shore estimates that 98% of pets posted on the page are reunited with their owner.

A quick scroll through Gainesville Pet Finder shows picture after picture of cats and dogs, usually multiple posts a day. Shore said the number of posts only increases after a hurricane or major storm.

People who have lost or found pets submit posts to Shore for approval. They have to include a physical description of the animal, where they were found or last seen and contact information.

She put together a checklist of what pet owners should do before a hurricane so she could share it with concerned owners. It recommends making sure pets are collared and microchipped and buying supplies like plastic bags, pet food, medication – and nail polish. The full guide is at the bottom of this story.

Shore explained that painting your pet’s nails before a hurricane will be a sign to anyone who finds them that the pet has been around people recently. Pets can get dirty and wet during a storm, she said, and may be mistaken as strays. It’s also helpful for identifying the pet.

“They get freaked out when the family starts packing up,” she said.

And hurricane season isn’t over yet. According to the National Hurricane Center, hurricane season for the Atlantic Ocean, Caribbean Sea and Gulf of Mexico lasts from June 1 to Nov. 30. That means pet owners and rescues alike will have to stay on guard.

Dhyana O’Driscoll is the owner of Angel Whispurrz Cat Rescue in Gainesville. Like Shore, she runs the operation by herself out of her home.

On any given day, O’Driscoll’s couch and floor are covered with cats waiting to be adopted. She sometimes takes them to the adoption events held at the PetSmart in Gainesville.

Because O’Driscoll’s operation is so small, she had to stop taking in cats under the threat of a storm as big as Hurricane Dorian. O’Driscoll said she is preparing for a greater number of rescues in the aftermath and future storms, as animals get separated from their owners and stressed by the weather.

“Ideally, no animal should be left behind,” she said. “If you have to make that choice, hopefully you have a microchip.”

O’Driscoll recommends people who lose a pet during severe weather post flyers that include contact information, a picture of the pet and the pet’s name. She suggested using neon paper for the flyers so they will catch the eye.

She said a major problem in reuniting pets with owners after a storm actually happens when people are trying to help — pet rescues from less affected counties will come in to assist with the increased numbers of lost pets.

“It’s difficult because a lot of times rescues get transferred to other counties,” O’Driscoll said, “and it gets harder for their owners to find them.”

With no way of knowing their pet is no longer in Alachua County, pet owners may continue looking in the wrong place.

Jessica Maestas, an adoption counselor at Haile’s Angels Pet Rescue, said whether people lose or find a pet, they should post on social media immediately and call animal services for more information.

In addition to her hurricane guide, Shore said that she has specific guides for people in different situations, like if they found a cat or lost a dog and vice versa.

THINGS YOU SHOULD DO A WEEK BEFORE

THINGS YOU SHOULD DO 12/24 HOURS PRIOR

Once the storm has passed, don’t allow them to just wander outside unattended, keep them on a leash for at least 24 hours.  The surroundings and smells will have changed and you don’t know what kind of debris may be in your yard that could potentially be harmful.