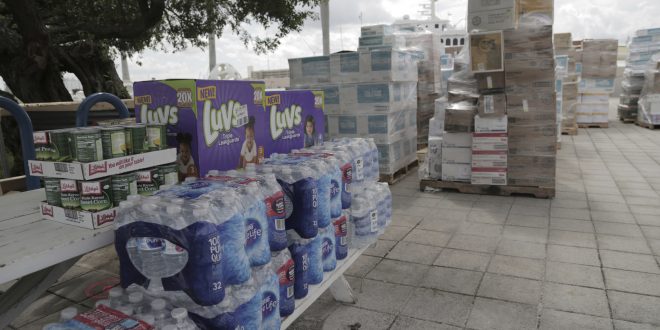 Hurricane relief supplies sit ready to be loaded Wednesday, Sept. 4, 2019, in Fort Lauderdale, Fla., on the "Globe" a ship that will make the trek to the Bahamas with much needed help. Chef José Andres' World Central Kitchens is loading up the vessel with the supplies for the victims of Hurricane Dorian that devastated the Bahamas. (Jose A. Iglesias/Miami Herald via AP)

Florida emergency management efforts shifted Thursday from storm preparation to providing assistance as Hurricane Dorian, after devastating the Bahamas and skirting Florida’s East Coast, threatened to cause heavy damage in the Carolinas.

Gov. Ron DeSantis said the state awaits aid requests from South Carolina and North Carolina and is offering help, where it can, to the Bahamas, as some islands were leveled in what was a Category 5 storm.

“We’re not out of hurricane season, obviously we’re at the peak, but there is obviously a chance we don’t have a storm and that water would go to waste,” DeSantis added, noting that Emergency Management Director Jared Moskowitz is “confident” the supplies can be quickly replenished.

Emergency response workers at the state Emergency Operations Center were advised shortly before DeSantis addressed the media Thursday that, based on meteorological forecasts, they should expect to be back within six weeks.

Besides Dorian, four other systems were being watched in the Atlantic, including a trough of low pressure about 500 miles east of the Leeward Islands that had a 10 percent chance of forming within five days and a broad area of low pressure halfway between the coast of Africa and the Cabo Verde Islands that was given a 50 percent chance of becoming better organized within five days.

Early projections are that Dorian churned up “tens of millions of dollars” in beachfront damages in Florida and is tied to two deaths in the state.

DeSantis, who said he doesn’t plan to go to areas of the state affected by the storm to avoid interfering with restoration efforts, advised people who have travel plans to the tourist-dependent Bahamas to check with their destinations because Dorian didn’t fully devastate all of the 700-plus islands and cays.

“They have many islands in the Bahamas. Some were decimated, others were not,” DeSantis said. “Canceling those plans doesn’t help them with their recovery.”

The impression of total devastation is something Florida tourism officials often must fight when the state faces a disaster in one area.

DeSantis expects the federal government may request assistance from the Florida National Guard to assist the Bahamas, a request that would be honored. He has also asked John Rood, a former U.S. ambassador to the Bahamas under President George W. Bush, to be the state’s “point person” in the relief efforts.

DeSantis anticipated receiving a quick assessment of the needs from Rood, a Jacksonville businessman who was expected to travel to the Bahamas on Thursday.

“A lot of people want to help, which is good, it’s a great impulse, but we don’t want this stuff ending up in some warehouse where it never ends up being used by anybody,” DeSantis said. “We want to make sure whatever our efforts are targeted in a way that is actually going to bring relief over there.”

State Agriculture Commissioner Nikki Fried on Wednesday said she had reached out to Michael Pintard, the Bahamas’ minister for agriculture, and she was working with some Florida farmers to provide aid to the islands.

DeSantis’ comments Thursday came as U.S. Sen. Marco Rubio, R-Fla., said he has reached out to U.S. Secretary of State Mike Pompeo and U.S. Agency for International Development Administrator Mark Green to assess available humanitarian assistance for the Bahamas and whether additional funds will be needed for disaster relief.

“Realizing the Bahamian Government will require the assistance of the United States, I strongly urge you to ensure all possible resources are made available to secure the safety and protection of Bahamian citizens and to assist in post-recovery relief efforts,” Rubio wrote.

Asked about the waiver request, DeSantis said he talked to Rubio on Thursday about Florida and the Bahamas, but the visa-related request is a federal decision.

DeSantis said the situation is different from Hurricane Maria, which caused massive damage in Puerto Rico.

“This is different than Hurricane Maria, because Hurricane Maria affected American territory, so you had U.S. citizens coming,” he said. “People have a right to do that if they’re U.S. citizens. When you’re foreign nationals, that has to be done consistent with whatever the federal policy is. So, we’ll see how that shakes out.”