Home / The Point / The Point, Sept. 3, 2019: The National Hurricane Center Does Not See Dorian Moving Significantly Until Wednesday

The Point, Sept. 3, 2019: The National Hurricane Center Does Not See Dorian Moving Significantly Until Wednesday

The news about Dorian

• As Category 3 Dorian continues to batter the Bahamas, the National Hurricane Center predicts the storm today could move slightly north but not significantly until Wednesday. (WUFT News, Palm Beach Post) 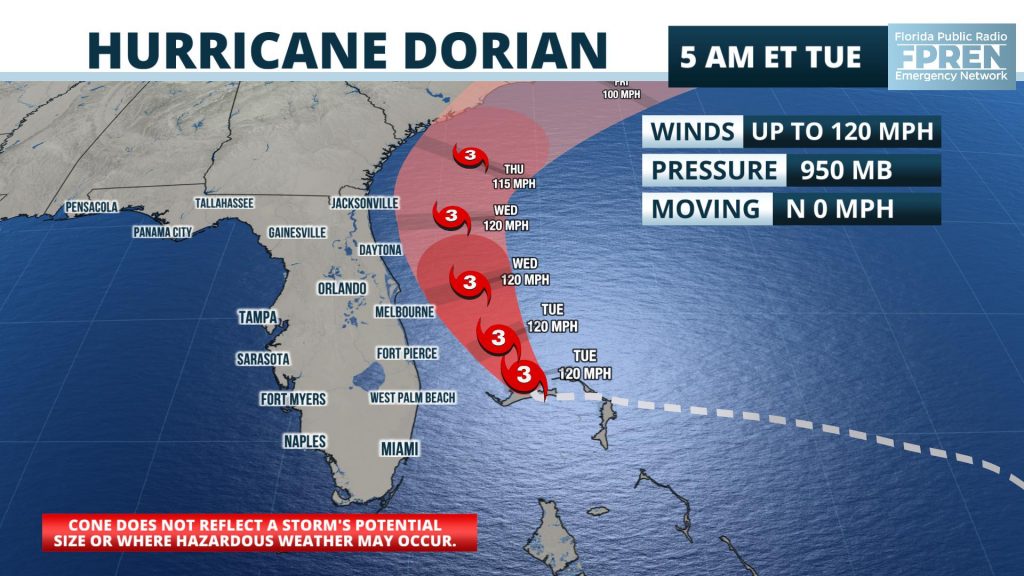 • As seen above, although Dorian is not projected to make its way across the state, north central Florida could still experience strong winds and heavy rains. People with livestock should plan accordingly. (WUFT News)

• So, why exactly did Dorian came to almost a complete halt over the Bahamas? The upper atmosphere, which is so powerful it dictates where storms travel, has been too calm. This could be a good thing for Florida. (WLRN)

• Miami church members determined to help those in the Bahamas are pulling together to provide assistance to the islands. (Miami Herald)

• The University of Florida will not have classes today or tomorrow. (The Alligator)

• As the hurricane is projected to head up the coast of Georgia, its governor, Brian Kemp, declared a state of emergency in 12 counties and issued a mandatory evacuation for six. (WJCT)

• The Orlando International Airport is not operating today. If you are supposed to fly in or out of any East Coast airport, it is recommended that you confirm the status of the flight and the airport. (Orlando Weekly)

• In preparation for Dorian’s possible landfall in Florida, more than 2,000 inmates from 18 facilities have been evacuated. (Miami Herald)

• In need of some new ways to keep the kids entertained if stuck indoors during the storm? The Palm Beach Post has got you covered.

• Flagler County is under a hurricane warning as Hurricane Dorian approaches. Its schools are closed through Thursday and Sheriff Rick Staly said the county will issue a curfew in Evacuation Zones A, B and F, as well as flood-prone areas at 7 p.m. on Tuesday. (WUFT News)

There’s no denying the importance of a good education.

Millhopper Montessori is one of only two area private schools accredited by FCIS, due in part to our highly-credentialed teachers and STEAM-enhanced curriculum. Millhopper’s unique methods allow each preschool through middle school student to explore and learn, all in a safe and secure environment. Millhopper students develop into poised, compassionate and creative leaders who are prepared for the next level. Call 352-375-6773 or visit millhopper.com today to schedule your tour.

• Science: Global Carbon Emissions Continue To Rise Despite Efforts To Cut Them

• Race: As Rising Heat Bakes U.S. Cities, The Poor Often Feel It Most

Jasmine is a reporter for WUFT News who can be reached by calling 352-392-6397 or emailing news@wuft.org.
Previous Hurricane Dorian Poses Problems for Those with Livestock
Next Photos: Hurricane Dorian Devastates Bahamas

The Point, Feb. 18, 2020: Florida Legislature Moves Toward A Ban On Organ Transplant Discrimination

The Point, Feb. 17, 2020: UF Tells Professors To Stop Ordering Sick Students To Be Tested For Coronavirus

The Point, Feb. 13, 2020: A Decision Could Come Soon On A Company’s Request To Pump From Ginnie Springs

Residents have poured out in numbers to voice their opposition to the request.