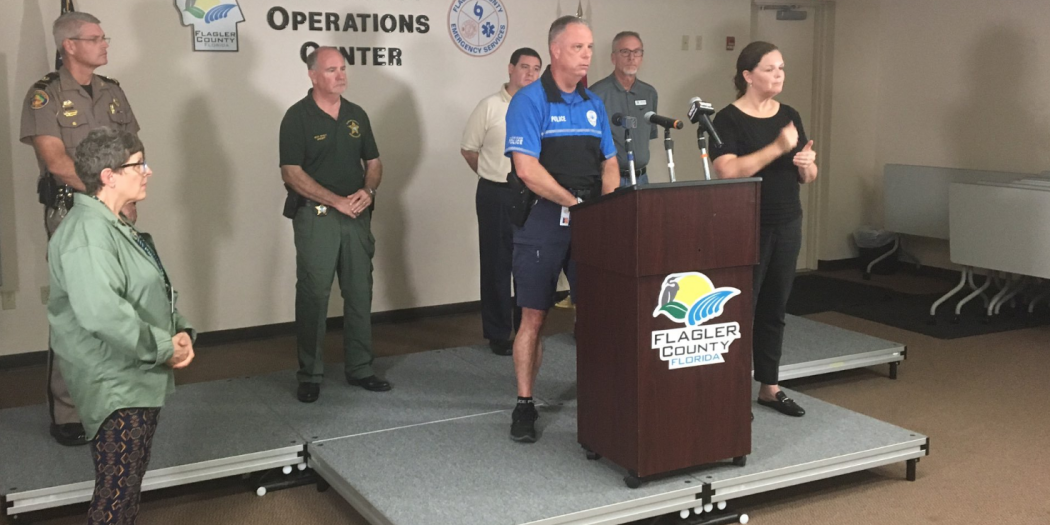 “Dorian, this is a monster that nightmares are made of,” Flagler Beach Police Chief Matt Doughney said as he warned against strong winds and storm surge potentially reaching 15 to 20 feet. (Quan McWil/WUFT News)

Flagler County is under a hurricane warning as Hurricane Dorian approaches Florida’s east coast. Sheriff Rick Staly said the county will issue a curfew in Evacuation Zones A, B and F, as well as flood-prone areas at 7 p.m. on Tuesday.

“Dorian is a monster that nightmares are made of,” said Flagler Beach Police Chief Matt Doughney. He added the county has a high chance of feeling tropical storm winds Tuesday afternoon.

On Monday, more than 100 residents checked in at two local shelter locations:

“My friend and landlord lives next to me and has gone, so I’m all by myself. The house — it’s not boarded up, so I figure it’s better to be here and to be safe than to be all myself,” said Jim Mathison, who brought his Chihuahua to Bunnell Elementary.

The school is part of County Commissioner Joe Mullin’s district.

“We got our medical and emergency operations. We’re ready as we can be,” Mullins said. “We’re also ready for the aftermath, something in past hurricanes we were not prepared for.”

Staly said bridges won’t close until winds are sustained at 45 mph. Entry back to the barrier island will be permitted with IDs only after it’s deemed safe for the public to return.

“Now is crunch time. It’s coming,” he said. “The question is how bad we are going to take it.”

Quan is a reporter at WUFT News who can be reached by emailing news@wuft.org or calling 352-392-6397.
Previous Health Facilities Evacuated As Dorian Looms
Next Hurricane Dorian Poses Problems for Those with Livestock