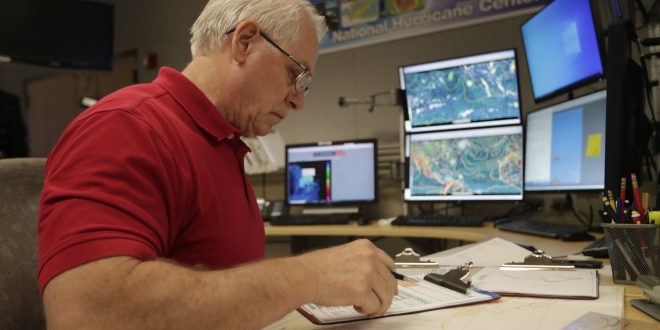 Floridians, particularly those along the East Coast, are being told to prepare for a major hurricane that could hit the state during the Labor Day weekend.

The storm, which remained named Tropical Storm Dorian on Wednesday, is projected to reach the state Sunday or Monday as a potential major hurricane, with winds topping 110 mph.

“We’ve been monitoring this storm with (the State Emergency Response Team) and will continue to watch closely,” Gov, Ron DeSantis tweeted. “All Floridians on the East Coast should have 7 days of supplies, prepare their homes & follow the track closely.”

Dorian’s projected path shifted north of Hispaniola on Wednesday, putting the system away from the island’s mountains and into more open water. Earlier in the week, Dorian had been predicted to remain a tropical storm when it reached Florida.

“Once the cyclone reaches the western Atlantic well east of the Bahamas, it will encounter a favorable environment of low shear and warm waters, resulting in a more marked intensification,” the National Hurricane Center posted late Wednesday morning. “The NHC forecast is more aggressive than the previous one and brings Dorian to category 3 intensity by the end of the period.”

Tropical-storm force winds are expected to reach Florida on Saturday, with the storm expected to make landfall late Sunday or Monday morning. The “cone of probability,” which offers a general idea of where the storm could make landfall, stretched Wednesday from around Miami to Savannah, Ga., though it was centered on the East Coast of Central Florida.

“We’ve done this before. We’ve been through this together. This is no time to panic,” Curry said during a news conference. “We don’t know what will develop in the days ahead, but it’s time to know your evacuation zone.”

Curry said no changes had been made in plans for the Florida State University-Boise State football game, which is scheduled for 7 p.m. Saturday at TIAA Bank Field in Jacksonville.

Dorian could be the fifth hurricane to impact the state in four years.

In 2016, Hurricane Matthew caused damage as it skirted the East Coast, and Hurricane Hermine knocked out electricity in the Tallahassee area. Hurricane Irma barreled through much of the state in 2017, and Hurricane Michael devastated parts of the Panhandle last year.

The News Service of Florida is a wire service to which WUFT News subscribes.
Previous Storm Dorian Closing In On Puerto Rico Near Hurricane Force
Next Aug. 28, 2019: Afternoon News In 90