Linda Swinburn remembers her final moments with her beagle Bella: Cradled in her arms while rushing to an animal hospital.

Swinburn, 50, and Bella, 4, were attacked in the front yard of their Northwood Pines home in Gainesville by three pit bulls in September.

Bella, an emotional support dog, died after being torn apart by the dogs. Every day after, Swinburn said recently, she saw Bella’s bloodstains on the sidewalk.

“It’s like a nightmare that you can never wake up from,” she said.

Although she now lives in Denver, Swinburn said she still wants Gainesville to ban the pit bull breed completely. But Florida law prevents any dog breed from being banned.

“I love Gainesville, I really do. But things have changed,” Swinburn said. “You have to open your eyes. There’s too many killings, and they’re just going to get worse.”

Gainesville Commissioner Harvey Ward, who represents the city’s District 2, where Swinburn and Bella lived, is researching possible pet limits in response to a recent spate of dog attacks.

Ward said the city uses Alachua County code that states a maximum of 10 dogs or cats for residents. Owners with more are considered to run a kennel or cattery, which must be zoned in single-family residential districts or accessory-use districts, according to the code.

The commissioner said he wants Gainesville to have its own, stricter policy.

“We do have some overly dangerous situations,” Ward said. “That’s not healthy, and it’s not OK. We can do better, and we should do better.” 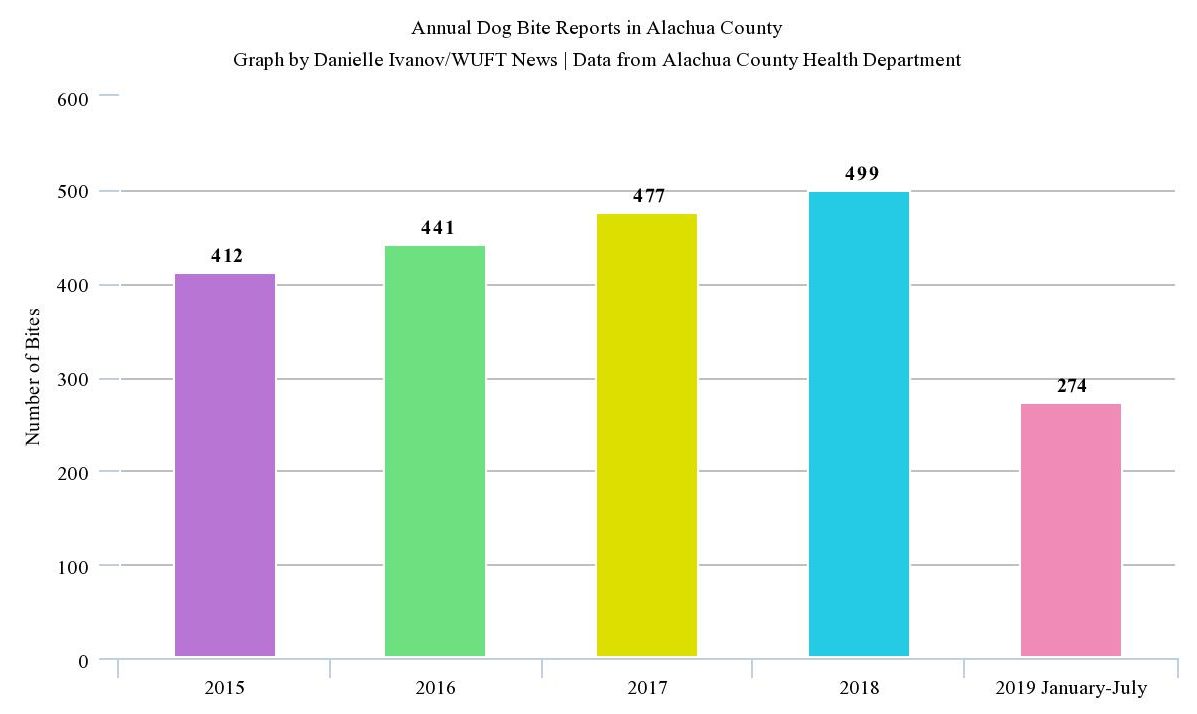 From June 2018 through June 2019, 26 dogs were classified as dangerous in the county. This means the dog, according to county code, had either aggressively bitten, attacked or inflicted severe injury on a human, or caused someone’s death on public or private property.

The code also deems a dog as dangerous if more than once severely injured or killed a companion animal while off of its owner’s property, or, when unprovoked, chased or approached a person upon the streets, sidewalks or any public grounds in a menacing fashion.

In any such case, one more or persons who consider themselves a victim must offer a sworn statement and the county’s animal services unit must have investigated.

Animal Services has euthanized 17 of the 26 dogs and returned five dogs to their owners. The remaining four are still being held by the county.

Ward said he thinks four is a reasonable number for dogs and cats. But he isn’t sure a limit is best yet. If one is proposed, all current pets would be grandfathered and not at risk.

“The issue for me is not about a limit,” he said, adding that how to best give law enforcement “a way to make people feel comfortable walking their dogs and letting their kids play outside.”

Margot DeConna, development director for the Humane Society of North Central Florida, said she reached out to schedule a meeting with Ward after hearing about his research. After they met, DeConna said she decided the Humane Society would do its own research to help advise the city commission on whatever pet proposal it makes.

“We want to make sure, if there is new legislation, that it will positively impact both people and pets,” she said. “That would be my fear – that we have something that makes us feel better but doesn’t actually address the problem.”

As of July 31, the county had recorded 274 reported dog bites in 2019. That was more than half of 499 total cases in 2018. Anthony Dennis, environmental health director for the Alachua County Health Department, said most of these attacks involved human injuries.

“I don’t know why last year was so crazy,” Dennis said.

After the Swinburn attack, Johnson said she did not walk her small dogs in the neighborhood. But Johnson does not support a pet limit. Instead, she wants owners to be responsible.

“I don’t think there’s an appropriate way to regulate it without infringing on people’s rights,” she said. “Bad people are going to do bad things no matter what.”

Virginia Brissette-Hirshik, 51, lives one street away and across from Reynaldo Davila, whose five pit bulls attacked another neighborhood dog March 22. Brissette-Hirshik said she supports a pet limit and wants more consequences for irresponsible owners.

She said she’s too scared to walk her corgi, Gizmo, 12, in the streets now. Instead, she walks him outside her workplace every morning and keeps a baseball bat by the front door.

Davila declined to comment upon being visited initially, opting instead to invite a WUFT News reporter back a few days later, only to not be available at his home on subsequent visits.

Williams said he supports a pet limit, because it will help prevent animal hording.

As for policy, Ward said he and his staff are looking at other Florida city ordinances for examples. He said Wilton Manors in Broward County has code he finds appropriate.

In Wilton Manors, residents are limited to four dogs maximum.

Julio Davila, code compliance supervisor for that city, said the limit has been in place since 1964, but it has not been enforced in the four years he has worked there.

Julio Davila, no relation to Reynaldo Davila, said he doubts a pet limit would help Gainesville. Instead, he recommended a dangerous dog ordinance, in which dogs who have previously attacked or killed other pets or humans are registered and annually investigated.

Alachua County already has such an ordinance.

“I just don’t see how a limit of dogs will help with dog bites,” Julio Davila said.

City employees at Ward’s request are working to set up a town meeting for Sept. 4 at a location to be determined.

“This won’t solve the dog attack problem, certainly, but it will give codes and GPD an extra tool in their tool box,” he said.

Danielle is a reporter for WUFT News who can be reached by emailing news@wuft.org or calling 352-392-6397.
Previous Students Learn Basics Of Forensic Investigative Skills At CSI Academy Of Florida
Next The Point, Aug. 15, 2019: ‘We Can Do Better,’ Gainesville City Commissioner Says In Push For Pet Regulations