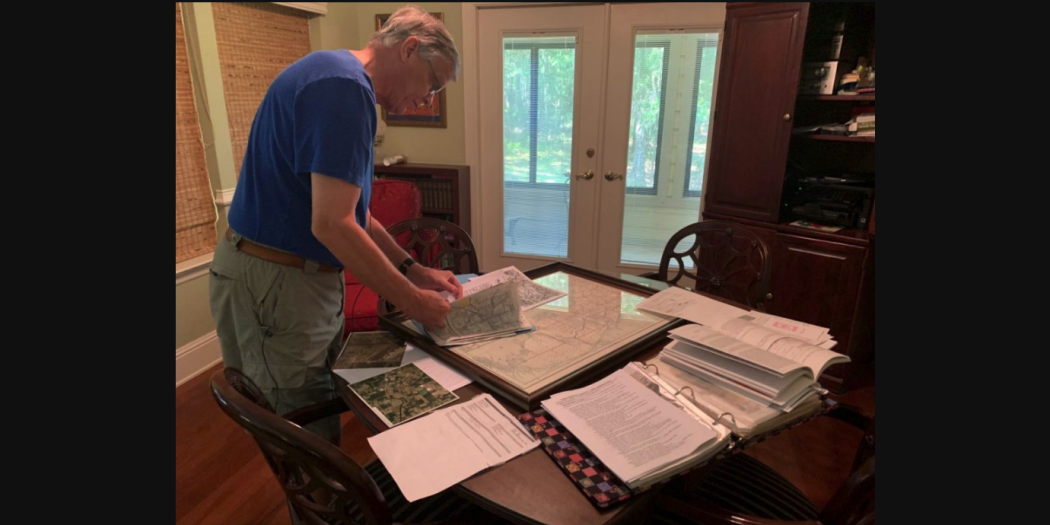 Sam Goforth sorts through files and documents he's been collecting about hte Gracy side of his family for years. (Sky Lebron/WUFT News)

Where Was The Town Of Gracy?

This story is part of Untold Florida: Your Story, Your Neighborhood, a WUFT News series built from your questions. Sam Goforth was curious as to what exactly it was that drew his great, great grandfather to Alachua County from Tennessee in 1883 when Florida wasn’t yet a popular destination.

From the late 1800s to the early 1900s, Alachua County experienced county-wide growth.

Land was cheap, and resources such as phosphate and lumber were plentiful.

Florida was sparsely populated. Old advertisements showcase the state attempting to sell itself as a tropical paradise, but outsiders thought of it as a swampy, dense forest with mosquitoes and alligators.

One of the people to take a leap of faith into Florida was Luther Columbus Gracy. A Tennessee-native, Gracy moved to Alachua County in 1883, and his great, great-grandson Sam Goforth wonders why.

“What drew him here? I don’t know,” Goforth said. “It wasn’t a wife, because the person he ended up marrying came from Tennessee. So what brought him here other than that land was available? I don’t know.”

However, what is known is the impact Gracy had on Gainesville, High Springs and Alachua County as a whole.

In 1884, post office records show that Gracy founded a small town tucked between present-day High Springs and Alachua. Soon after arriving in the area, he started buying up cheap land that would eventually total over 7,000 acres in Alachua County and 3,000 acres in Columbia County.

Luther fittingly named the town Gracy, and developed a sawmill operation. Goforth said he has tried to learn more about his great, great grandfather’s life since the 1980s.

Goforth sifts through piles of documents about his family and genealogy. He looks at discovering his family’s past like solving a puzzle.

Goforth said he didn’t have any idea where the town Gracy was located until a trip to the Matheson History Museum, 513 E University Ave.

“I was in the kitchen at the Matheson and there was an early 1890s map of Alachua County. And there was Gracy, Florida,” Goforth said. “And it was the first time I’d ever seen Gracy on a map.”

At the turn of the 20th century, many people founded small settlements in rural Alachua County. Kaitlyn Hof-Mahoney, the curator of collections at the Matheson, said Gracy was one of many.

“You know, there’s Hatchet Creek, there’s Bland, there’s a community that was known as Hope, Paradise, so a lot of these have really fun names…Sugar Grove,” Hof-Mahoney said. “As some of the larger towns, like Gainesville, Micanopy, as they grew and expanded, these smaller communities were either absorbed or deserted.”

Gracy appears to have followed that same formula. According to records and family documents, Gracy’s post office was defunct after 1902, and the Gracy family, including his wife Margaret and their children, moved to High Springs. They only lived there for a small period of time though, as Gracy built a mansion in east Gainesville that the family moved into in 1906. In September of that same year, the University of Florida opened in the city.

Goforth was also interested in exactly where the original Gracy sawmill was, so he reached out to his cousin’s husband, Greg Chmielewski, who knows a bit about land surveying from his time as an architect.

Chmielewski was able to dig up enough old records and deeds to pinpoint the exact location of the sawmill off Railroad Ave.

The plot is covered in bushes and shrubs. Right behind it is a residential community, and in front and beside the land are larger homes.

“I’m sitting there saying this guy is underrated, and he did so much for Gainesville, it’s unbelievable,” Chmielewski said.

The Matheson found Gracy gave out long-lasting loans with low rates for people attempting to get their start in the city.

The Gracy family is also connected to other prominent Gainesville names. Gladys Gracy, Luther’s oldest daughter, married Samuel Harn. Their daughter, Mary Anne Harn, married Dave Cofrin from Wisconsin, who made the contribution to fund the Harn Museum. And if Cofrin sounds familiar, it’s because there’s a small nature park off of 8th Avenue in the family’s name.

According to Goforth’s extensive family tree, 43 descendants of Luther Gracy lived in Gainesville. Right now, he says only 12 are left. One of those people is Luther’s granddaughter, Mary Gracy Feiber.

Feiber used to live in the Gracy house mansion in East Gainesville, along with her brother, Lawrence Cecil Gracy. They both have no memories of Luther, as he died in 1921. But they remember their grandmother Margaret, and the house they spent their childhood in.

“People go ‘You live in that? That’s a mansion!’ I went sharing a room with my sister, I don’t know how big that is,” Feiber said.

Eventually, all the land Luther owned was split up among his children, and most of it is sold off. Some of the land included Gainesville’s north side, including portions of the San Felasco Hammock and Hunter’s Crossing.

Lawrence Cecil lives on the last 13 acres of 10,000 originally owned by Luther. It’s something Lawrence says he hasn’t really thought about.

“I just look toward the future, not what’s past,” Cecil said.

But for Goforth, the discovery of his family’s past is an exciting adventure.

“It’s history! I like history and so what was it like for him when he got here? I-75 wasn’t here. 441 wasn’t here.,” he said. “Travelling from Gainesville to High Springs wasn’t a 15-minute drive in the car.”

Goforth knows he’ll never discover everything about his ancestors, but finding out what he can is a trip worth taking.

Sky is a multimedia producer for WUFT News who can be reached by emailing slebron30@ufl.edu or calling 352-392-6397.
Previous The Point, Aug. 9, 2019: These Three Alachua County Schools Most Need More Effective Teachers
Next The Point, Aug. 12, 2019: Untold Florida: What Was Gracy’s History In Alachua County?