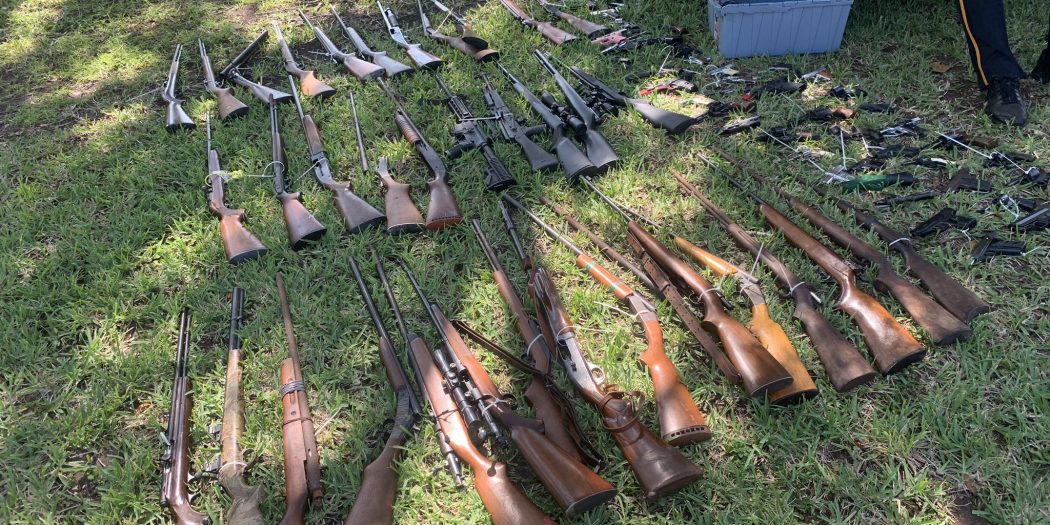 The wide variety of guns collected will be checked for stolen status and any evidentiary value before being turned over to the Alachua County Sheriff's office for disposal. (Nicole Rogers/WUFT News)

Fewer firearms — 143 to be specific — are left in the hands of the Gainesville community just one week after the mass shootings in Texas and Ohio.

The Gainesville Police Department partnered with the State Attorney’s Office and the Alachua County Ministerial Alliance to host a gun buyback event Saturday where community members could turn in unwanted guns in exchange for Visa gift cards or an Xbox. People who chose to turn in guns were given full immunity during the four hours of the collection.

The State Attorney’s Office spokesman Darry Lloyd said they began planning the event in November, and the recent mass shootings were just a horrifying coincidence.

“We had no idea what was going to occur last weekend,” Lloyd said of the timing of the mass shootings. “We didn’t know. But this community — we will respond and continue to pray for those where it’s happening. We just want to avoid it happening in our backyard.”

The wide variety of guns collected will be checked for stolen status and any evidentiary value before being turned over to the Alachua County Sheriff’s office for disposal.

Alachua County resident Michael Warren turned in a rifle and a pistol.

“We feel like it’s just a safe solution,” he said. “What can you do with old firearms? People throw them away. You put them in dangerous places. It’s better to just give them to someone who can dispose of them.”

Nicole is a reporter for WUFT News who can be reached by calling 352-392-6397 or emailing news@wuft.org.
Previous ‘Like Watching Spider-Man Do His Thing’: Gainesville Park To Soon Have Traveling Rings Fitness Equipment
Next Gainesville-Alachua County Drug Task Force Quietly Dismantled A Cocaine Ring Described As One Of Region’s Largest