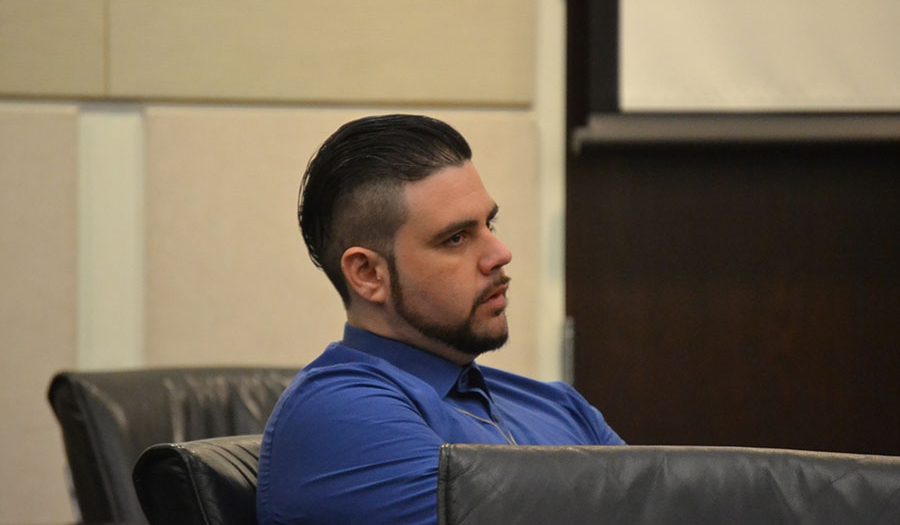 Nelson Armas, the defendant, watches the proceedings of the trial. (Eve Rosen/WUFT News)

As days two and three of the Nelson Armas trial unfolded on Wednesday and Thursday, the prosecution continued to assert its claim against the defendant.

The prosecution presented evidence against Armas — on trial for the first-degree murder of his ex-girlfriend Hannah Brim — in the form of a video. It depicted an initial interview of the defendant by detective Tom Mullins, the lead detective in the case.

It was in this video that Armas explained to the detectives that he was arguing with Brim in her car before she stopped to let him out. He said that was the last time he saw her.

The relationship the two had was complicated, with Armas explaining that they had been involved in a sexual relationship at the time that Brim disappeared.

“I was using her as a Band-Aid,” Armas said during the video recording. “I just wanted someone to be there.”

He then said in the video he was picked up on a day in January 2016 by a truck driver who dropped him off. He then walked by the Waffle House and the convenience store on U.S. 441 at 53rd Avenue.

Randy Roberts, who testified on Thursday, has worked with the Gainesville Police Department and saw no one in the surveillance video from the businesses that Armas said he walked past.

Christina Tuck, who has worked with the Alachua County Sheriff’s Office for 17 years and as a crime scene investigator for 11 years, was one of the investigators to go through burn pits on Armas’ property where they say they found burnt pieces of floor mats and clothing. She showed these to the jury during her testimony.

Gainesville Police detective Matthew Goeckel provided the jury with cell phone mapping data and phone records between Armas and Brim. These, Goeckel said, allow detectives and others to see on a map where these calls or texts were made.

“Using these records, we can determine the basic geographical area where a person was or where a phone was when the phone call or text message was received,” Goeckel said.

The trial will continue throughout Friday and into next week. The case as a whole is estimated to take 10 to 14 days in order to reach a verdict.

Everitt is a reporter for WUFT News who can be reached by emailing news@wuft.org or calling 352-392-6397.
Previous Gainesville City Commission Makes Tweaks To Current Public Comment System
Next The Point, Aug. 9, 2019: These Three Alachua County Schools Most Need More Effective Teachers