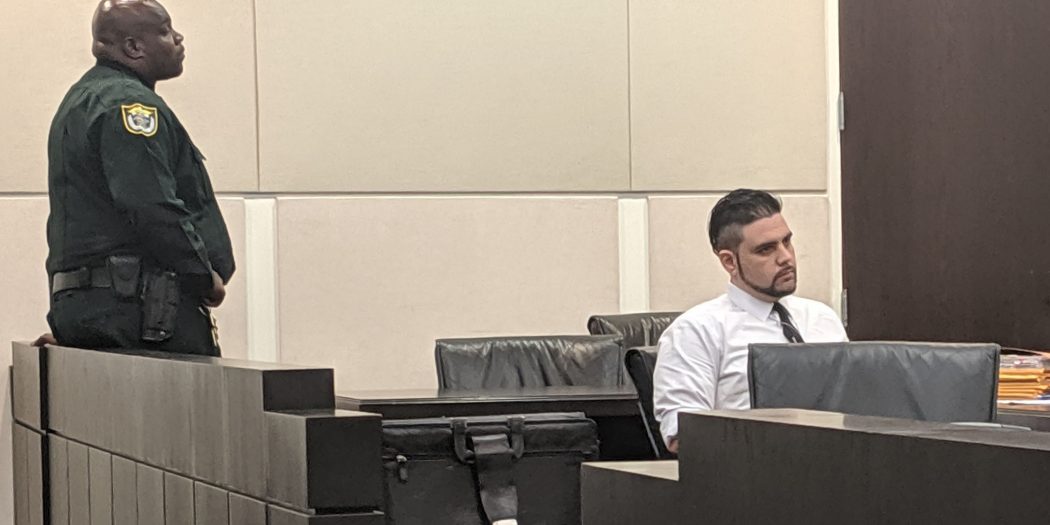 Nelson Armas, right, the defendant in the trial, is charged with the first-degree murder of his ex-girlfriend Hannah Zehner Brim. (Eve Rosen/WUFT News)

There was a heavy atmosphere in the courtroom on Tuesday as the first full day of testimony in the murder trial of Nelson Armas began.

Armas is charged with the first-degree murder of his ex-girlfriend Hannah Zehner Brim, who was reported missing on Jan. 19, 2016. She was five-and-a-half months pregnant at the time she disappeared. He is also charged with auto theft and tampering with evidence.

Armas was with Brim when she was last seen, and after several searches over the span of eight months, investigators got new information that led to a swampy area near Orange Heights where human remains were found. DNA testing confirmed that the remains were Brim’s.

During his opening statement, Sean Brewer of the 8th Judicial Circuit Office of the State Attorney painted a portrait of the crime scene to the jury.

Brewer asserted that after an argument, Armas killed Brim and loaded her body into the trunk of her car and drove her to an unknown location where he disposed of the body. He later tried to get rid of a knife, which the prosecutors argued is the likely the murder weapon, and planned on getting the car destroyed, but not before burning the bloody floor mats and some of Brim’s clothes.

The defense argued none of the evidence the prosecution provided will prove that Armas is guilty beyond a reasonable doubt, the standard for the jury to reach a conviction.

“He’s innocent now. He’s innocent in every witness that you hear, every piece of evidence that you see. You can’t imagine, you can’t wonder, you can’t think, you can’t even suspect. Not a single piece of it proves any criminal act beyond all reasonable doubt,” said defense attorney Bill Salmon.

After opening statements from the prosecution and defense, the prosecution called witnesses to the stand. They included Susan Zehner, who is Brim’s adoptive mother, as well as friends of Brim.

One of those friends was Abrianna Southerland, who saw Brim on the day that she went missing. She also saw Armas that day. She said she had been playing with a knife found in the center console that had a defect that made it difficult for the blade to close. This knife is the weapon that the prosecution is arguing is the murder weapon.

Zehner and her husband reported that Brim had not been heard from by anyone since Jan. 19, 2016.

They were the ones that reported her missing.

She had no contact with Brim from the beginning of 2016 to the day that Brim disappeared. She adopted Brim when Brim was two months old, and Brim was their second adopted child.

The trial will continue throughout this week and into next week as more witnesses are called to testify.

Everitt is a reporter for WUFT News who can be reached by emailing news@wuft.org or calling 352-392-6397.
Previous Alachua County Commission Decides To Repeal Plastic Ban After Lawsuit Threat
Next The Point, Aug. 7, 2019: Facing A Legal Threat, Alachua County Backs Off For Now On Plastic Bag Ban