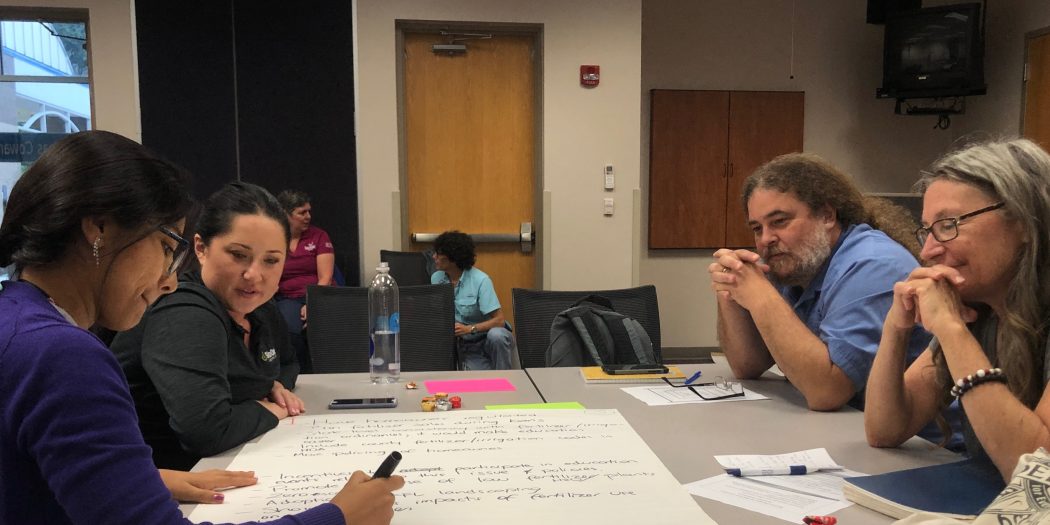 Jeannette Hinsdale looked at those sitting across a table from her and equated fertilizers to dangerous drugs – people abuse them, they need stricter regulation and they kill wildlife.

“I think we should put up pictures of dead manatees,” said Hinsdale, 60, of Gainesville, a former schoolteacher and librarian now working as an independent contract researcher.

Hinsdale was among 15 Alachua County residents, scientists and businesspeople at the first of two public workshops concerning the county’s new fertilizer and irrigation mandates.

They met for about two hours one recent evening to brainstorm ideas for how to educate the public about changes to related ordinances that will take effect Oct. 1.

The Alachua County Commission adopted the ordinance amendments in April to help preserve county water sources like springs, lakes, creeks and the aquifer.

According to the amendments, any new irrigation system installed must have a soil-moisture or rain sensor to keep water from being wasted, said Stacie Greco, interim water resources program manager at the county’s environmental protection department.

Greco, also the workshop organizer, said the fertilizer ordinance changes may be even more important. It aims to stop eutrophication, the pollution process in which excess nutrients in water cause algae blooms, and ultimately kill other aquatic life, she said.

Starting in October, fertilizer with nitrogen must be 50% slow-release and can only be used March through June, Greco said. Fertilizer with phosphorous without proven soil deficiency is prohibited. Agriculture and indoor plants are exceptions to the fertilizer ordinance, which targets residential lawns and is expected to help keep excess nutrients out of Florida waters.

Greco cited algae blooms, like red tide, as an example of environmental harm fertilizers cause.

“This is one piece of the puzzle,” she said. “I really hope that talking to people and explaining why we’re doing this, to protect our collective water source, will get us compliance.”

Taylor Clem, 31, an agent at the University of Florida Institute of Food and Agricultural Science Alachua County extension office, said he’s been explaining the fertilizer changes to community members at work.

Clem said he believes residents want to protect the local environment. With more information between neighbors, he said, the ordinance can be self-enforced instead of policed by the county.

Basil Iannone, 49, a UF assistant professor who researches ecology, said he attended the workshop to better educate himself on the ordinances.

“It’s more complex than just saying it’s good or bad,” Iannone said. “Obviously, there may be potential benefits of it, but there also may be unintended consequences.”

Sara Heathcote, 33, the area manager for SiteOne Landscape Supply, said her company already has fertilizers that meet the ordinance’s updated standards. However, they are more expensive, and Heathcote said her customers may be discouraged by higher prices.

“I want to just encourage them to learn about all the science behind it and their options,” she said, “so they can make an impact in a positive way.”

“People can’t love their lawns if there are a bunch of things out there hurting their kids or the environment,” Thompson said.

Thompson said he attended the meeting to stay involved with the county’s clean water efforts and to show that businesses – and not just residents – care.

“Unfortunately, a lot of us get all bundled in as people who help cause the problem, when we’re really out here trying to fix it,” he said.

Larry Hartfield, 62, of northwest Gainesville, said he loves his big lawn and bright roses but has mixed feelings about the county’s new ordinance. Hartfield said residents don’t know enough about the science behind the new rules, and some think the county is doing too much too fast.

But despite his desire for a green lawn year-round, the big picture matters more, Hartfield said.

“If it ultimately affects our water and our quality of water, it’s really, really important,” he said.

The county’s second workshop on the ordinance amendments will be held at 6 p.m., Tuesday, in the Alachua County Health Department auditorium, 224 SE 24 St.

Danielle is a reporter for WUFT News who can be reached by emailing news@wuft.org or calling 352-392-6397.
Previous The Point, July 26, 2019: Fish Island In St. Augustine Will Become Undeveloped Passive Park Following State Purchase Vote
Next July 26, 2019: Morning News In 90