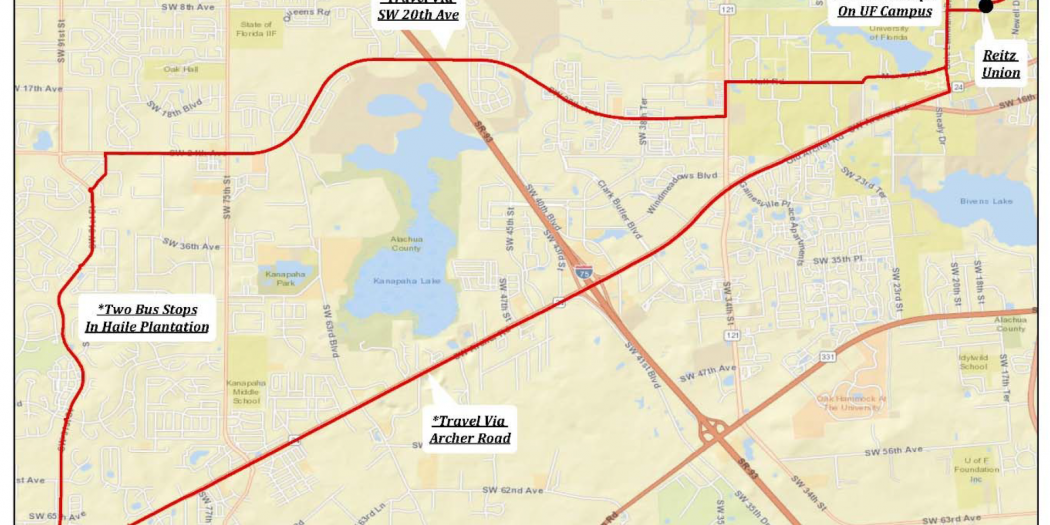 RTS is adding a new route that will make two stops within Haile Plantation in southwest Gainesville. It will be numbered route 150 and begins in fall 2019, pending Gainesville City Commission approval. (Courtesy of RTS)

The Regional Transit System on Wednesday endorsed amendments to 22 bus routes for the fall as well as the addition of a new one originating in Haile Plantation.

Krys Ochia, the transit planning manager for the system, presented the proposed changes to the RTS advisory board and said they would accommodate concerns of bus drivers and customers.

Many of them were suggested by bus drivers.

“The drivers are the ones who are out there every day,” he said. “They understand the nuance of the routes. They listen to the concerns of customers.”

The proposed changes will be sent to the Gainesville City Commission for approval on Aug. 15. If approved, they take effect on Aug. 19.

Ochia said a main concern of drivers involved hitting time points, or the time a bus is supposed to be at a certain stop.

“When drivers don’t hit the time points, the rest of the schedule is off, and customers may miss their bus,” he said.

Since drivers get disciplined for not hitting time points, Ochia said, many of the changes are to help alleviate these problems and make routes more efficient.

“Three minutes might not sound like a lot,” he said, referring to a start-time change on the route 38 bus, “but when it comes to transit, it actually is a lot.”

Another concern is safety, Ochia said. Some changes, such as a detour on route 1, are to avoid challenging movements drivers have to make, including around traffic circles and tight corners.

Other routes, such as the 16 and 37, have been adjusted to meet customer scheduling needs, including an expanded microbus service in East Gainesville.

Patti Wiggs, the transit customer advocate for RTS, said a major customer issue is having a driver go past them without stopping when they are at a bus stop.

“It’s summer now, so a lot of people stand in the shade, out of sight from the driver,” Wiggs said. “We can’t completely fix this. It’s a mistake. But we are working to make drivers aware of trouble spots.”

She said driver rudeness is another complaint.

“This one is unacceptable,” Wiggs said. “Rudeness is a choice.”

She also mentioned that a lot of drivers say they are also not treated the nicest by customers.

“We are the professionals, though,” she said. “We should be the ones to take [the high road].”

The new route 150 will begin in Haile Plantation and have two stops at the University of Florida. Ochia said it would help serve customers who face increasingly expensive parking on campus.

RTS is slated to receive about $13.8 million from UF and $1 million during fiscal year 2019-20 from Santa Fe College for transit services.

“The groups who provide funding, of course, get a good say in the changes that are made,” Wiggs said. “We want the ones who contribute to feel like they’re getting their money’s worth.”

An example is the plan to move service from the 10 bus from Southwest Fourth Avenue to West University Avenue, per request of Santa Fe College, which pays for half of the route, Wiggs said.

Another concern discussed at the meeting involved accessibility for wheelchair users.

Richard Nelson, a learning specialist at the UF Disability Resource Center, said these users are sometimes bypassed if a bus doesn’t have enough room. Nelson suggested sensitivity training for drivers related to customers who need accommodations.

During the period for public comment, Kenneth Levinson, who was called a “regular” by a board member, complained of incorrect and unclear announcements for bus stops. Levinson also spoke against certain wraps – the full-scale graphic advertisements covering buses – particularly the ones with a lawyer’s face. He said they make it “impossible” to see out of a window at night.

Once the meeting adjourned, however, Levinson was the first to get up to leave the RTS administrative building on Southeast 13th Road.