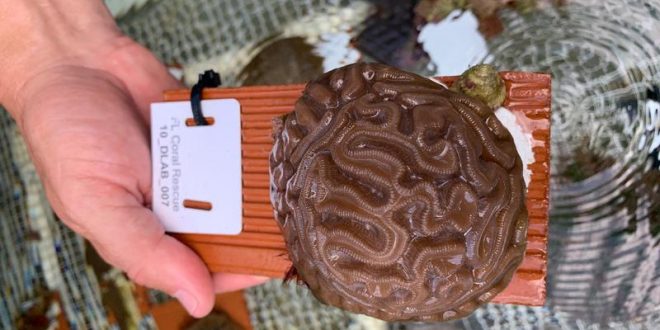 This coral colony is made up of mounding species that help build tropical reefs. It was taken from an area of the Marquesas where corals have not yet been infected by a new disease infecting Florida's reef tract. (Jenny Staletovich/WLRN)

As Planet Heats Up, Scientists Race To Save Reefs

In a gravel parking lot on Virginia Key crowded with shade tanks used for raising fish, coral researchers have a new project underway: a Noah’s Ark for disappearing coral.

The project is part of an aggressive new push by researchers from Australia to the Keys to find ways to protect reefs on a planet where warming oceans, increased coastal development and over-fishing are increasingly putting corals in peril. Over the last year, the National Academies of Sciences and Engineering put together a team to assess emerging solutions – some so novel they’ve emerged in recent months.

Much of what they’re doing is uncharted territory, from gene editing to manipulating clouds.

In South Florida, the research comes at a critical time: the corals being tended to at the University of Miami’s Rosenstiel School of Marine and Atmospheric Research on Virginia Key are part of a rescue plan for a disease outbreak that erupted five years ago off Virginia Key. The disease has spread north and south along 400 miles of coast, from the Keys to Martin County. Unlike other diseases, it’s spread among different species of corals, hitting the mounding reef-builders the hardest. Five rare protected species have also been sickened.

Most coral diseases flourish in warmer months and tend to die out in winter. Not this one.

“It’s the most devastating episode of a coral disease on record anywhere in the world,” said UM coral biologist Andrew Baker, whose lab is caring for the corals. “It’s lasted coming up for five years now and it’s devastated, by some estimates, tens or perhaps even hundreds of millions of corals in the Florida reef tract.”

Researchers have used anti-biotic paste to treat sick coral, but so far have not found a way to stop it.

The new disease emerged in the midst of a worldwide bleaching event that hit 75 percent of the ocean’s reefs and lasted three years until 2017. The duration and breadth are unprecedented, the National Oceanic and Atmospheric Administration reported.

Scientists fear bleaching events – when warmer water prompts coral to spit out the algae they need to survive – will increase as climate change drives up ocean temperatures. They also worry about increasing acidification, which occurs when oceans absorb more carbon. By 2004, the amount of carbon being absorbed by oceans had quadrupled over levels predating the Industrial Revolution, NOAA reported in March. More acid in the water makes it harder for corals, and some shellfish, to build their skeletons.

The spread of disease and damage to reefs has prompted researchers around the planet to explore new and innovative ways to try to save them, Palumbi said. The Academies’ evaluation found 23 potential fixes, but only seven have been field-tested.

Among some of the most promising are heat-stressing lab bred coral to make them better prepared for warmer reefs and finding more heat-resilient algae and getting corals to accept them.

But there are also fixes that push the boundaries of what scientists can do. Artificially changing overheating waters could help. Cooler water could be dumped on some reefs, but only in small areas, Palumbi said. Scientists are also looking at cloud manipulation to shade reefs.

Artificial reproduction also holds promise. As corals die off on some reefs, scientists worry too few will be left to seed the reef. Freezing sperm and using it to fertilize eggs could be one method to boost spawning, Palumbi said.

“When the committee started this report, that wasn’t possible to do, so we see there’s a whole category of interventions that are in the process of being researched,” he said during the Washington presentation.

The overall goal is to come up with enough fixes to keep reefs around long enough to solve the more complex problems causing climate change. Scientists aren’t waiting to get to work, but Palumbi said they need help figuring out how to apply the fixes in the most strategic manner.

“We come back to the same set of three strong needs,” Palumbi said. That means protecting reefs from local threats like overfishing and pollution, taking steps to slow climate change and helping reefs deal with impacts from climate change now. Otherwise, fixes working now won’t work in a century.

This, he said, “allows us to use this time to make reefs resilient enough to bridge from now to when the climate starts getting better.”