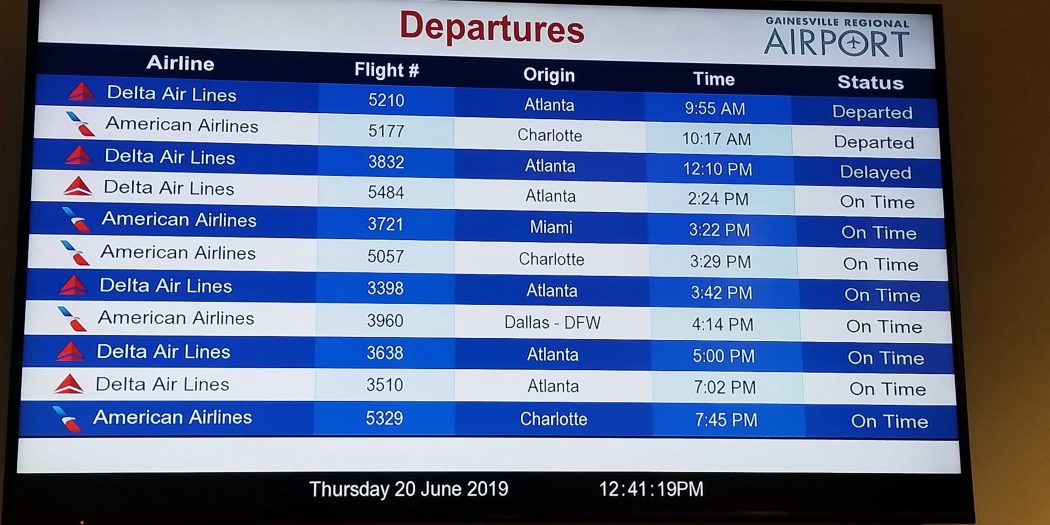 A screen shows airport departures at the Gainesville Regional Airport. On a rainy afternoon, one planned flight had been delayed. (Matthew Serna/WUFT News)

How Do Delays At Gainesville’s Airport Compare To Its Competitors?

This story is part of Untold Florida: Your Story, Your Neighborhood, a WUFT News series built from your questions. One frequent flyer out of Gainesville Regional Airport wondered how often mechanical problems cause delays there and whether it’s about average compared to other airports of its size.

It’s a time of growth for the Gainesville Regional Airport.

There are plans for a new terminal and parking garage, more direct flights have started, and airport management recently attempted to entice carriers like Allegiant or Republic to add Gainesville flights.

The airport averages about 15 flights a day through American Airlines and Delta Air Lines. With non-stop service to Miami, Atlanta, Charlotte and now Dallas/Fort Worth, the number of passengers flying into and out of the facility is increasing.

Airport spokeswoman Erin Porter said the proof is in the numbers.

But an increase in customers can sometimes mean an increase in complaints. Some passengers have experienced frequent delays out of the small-scale airport. While the perception may be that delays are the airport’s fault, it is the airlines who are responsible. Safety precautions often take hours in between flights.

Above: In our “Untold Florida” podcast, hear a version of this story, along with host Henry Coburn’s explainer of other transportation issues around Gainesville.

Maintenance delays can refer to a wide variety of mechanical or cosmetic issues that must be addressed and fixed before another flight can take off.

The airlines flying out of Gainesville average better statistics than airlines out of most airports around the state and nationwide, Porter said.

“Most delays — I would say almost all delays — are beyond an airport’s control,” Porter said. “However, if you look at the Bureau of Transportation statistics, Gainesville does better both on departure and arrival percentages than our competitors, than all airports in the state of Florida on average, and the national average for delays.”

Customer Robert Langlands said he chooses Gainesville Regional Airport over Tampa and Orlando any time he can.

“We’ve not experienced any delays and we’ve been flying in and out of here quite a bit,” he said, adding, “the people are always really nice.”

Even with the 6.5% increase in customers last year, Porter said the airport still gets some grief about expensive airfare cost. Its website offers a price calculator comparing overall costs to its competitors.

“Many people who perceived our competing airports to be more reasonable fare-wise are realizing that when they make the drive — the gas, the tolls, the parking, and the time — that all costs money,” she said. “And so, it makes more sense to fly out of Gainesville, it’s more convenient and it’s just an all-around better experience for them.”

Langlands said the convenience of a smaller airport saves him and his wife time and money.

“I joke with people,” he said. “We park in long term parking and it takes us a minute to get to the terminal.”

Cynthia is a reporter for WUFT News who can be reached by calling 352-392-6397 or emailing news@wuft.org.
Previous News In 90: July 19, 2019
Next The Point, July 22, 2019: Untold Florida: The On-Time Versus Delayed Flight Rate At Gainesville Regional Airport