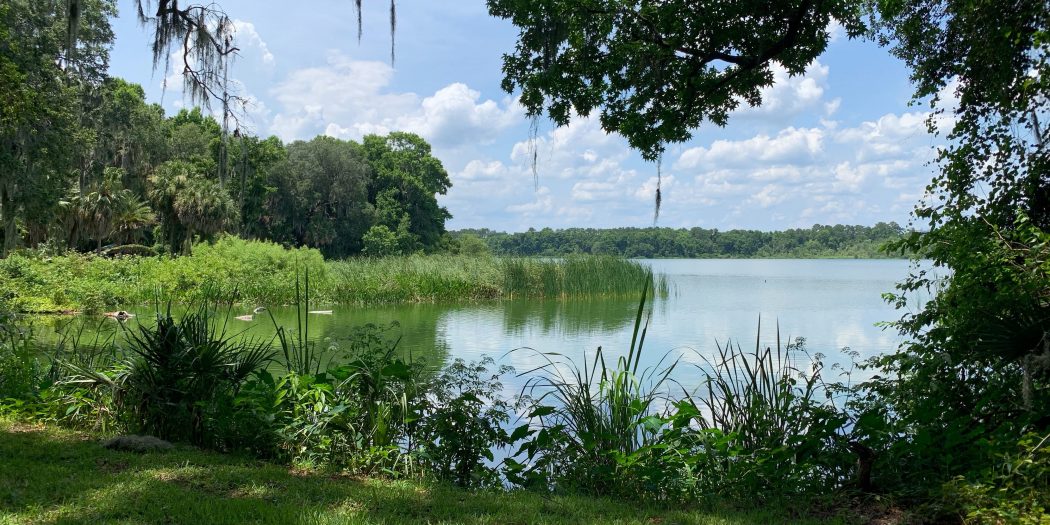 For Whom Or What Are Lake Alice And Bivens Arm Named?

This story is part of Untold Florida: Your Story, Your Neighborhood, a WUFT News series built from your questions. One reader pointed out that the originations of Lake Alice and Bivens Arm’s names remain a mystery to historians and local officials. They wondered if we could get to the bottom of either one.

Every day people walk past Lake Alice on the University of Florida campus, but few think about how it came to be.

UF student Austin Urso, for example, occasionally plays ultimate frisbee near Lake Alice and drives by it every once in a while, but he hasn’t paid much attention to the name.

So who was Alice? Where did she come from? And how did she become the namesake of the biggest and most popular lake at UF?

There aren’t any — not officially. UF historian Carl Van Ness said the university simply hasn’t looked into it.

“Well, it’s interesting because we’ve been asked many times over the years, what are the origins of the name for Lake Alice and we’ve never actually done the research on this,” Van Ness said. “So we don’t know the definitive answer.”

Still, the name Alice had to come from someone at some point in time.

Prior to the 1890s, Lake Alice had a different name — either Jonas Pond or Jonah’s Pond, depending on the source. This is all according to a 1953 UF student’s thesis, seen below. An 1894 U.S. Geological Survey map has the body of water officially labeled as Lake Alice.

A page from the 1880 U.S. Census does not help close the case. A 59-year-old Alachua County resident named Rollin Witt was listed as a hotel keeper — not a farmer — though he did then have a 20-year-old daughter named Alice Witt.

Many lakes’ names have changed over the years, making it tough to decipher if the story is true because of how landowners back then named their land after loved ones. Macdonald, a local historian, said it happened quite frequently.

“There were a lot of people in the 1890s who came here as citrus growers and bought large tracks of land,” Macdonald said. ” And they would get to build and name roads. So, the thought is that it could have been named for a developer’s daughter or maybe wife. That was very common.”

As the university expanded through the early 1900s, the state purchased the lake and the land around it in 1925 as part of an agricultural experiment station.

“I think it’s one of those wonderful myths, right? We don’t really have a clear answer and it kind of makes it fun,” Macdonald said.

Above: Interested in better knowing our area’s waterways? WUFT’s Henry Coburn hosts this season of our “Untold Florida” podcast and interviews Sofia Arriaga about a large cleanup of area creeks earlier this year.

Alice isn’t the only mystery lake in Gainesville. Bivens Arm is a lake in southwest Gainesville whose name’s origin has long been unknown, too. Today, it features a nature park popular with bird watchers.

“The early history of Bivens Arm is not well documented,” according to Alachua County’s website. However, half of the equation is easy to figure out, said Daniel Canfield, PhD, UF professor in fisheries and aquatic sciences.

“If you look at Paynes Prairie, it’s relatively round,” Canfield said. “And then Bivens Arm used to come up from Paynes Prairie right up to the lake, so it looked like a big bow. So, you can see why the word arm got there. Where the Bivens came from we don’t know.”

The earliest known use of the land surrounding the lake was Native American hunting grounds. Beginning in the late 1800s, the land was used mostly for agricultural purposes, such as cattle ranching, swine farms, vegetable farms and orange groves.

As was the case with Lake Alice, Bivens Arm may have been named after a family member, wife or even a pet. Canfield says there were different spellings of Bivens throughout history, but since nobody lived near the lake, it’s nearly impossible to pin down the origin.

“There was different spellings of it — Bivans, Bivens — but no one knows where it really came from,” Canfield said. “There are no families around there that we know about that had that name. So, whether it was way back in Spanish days or who knows.”