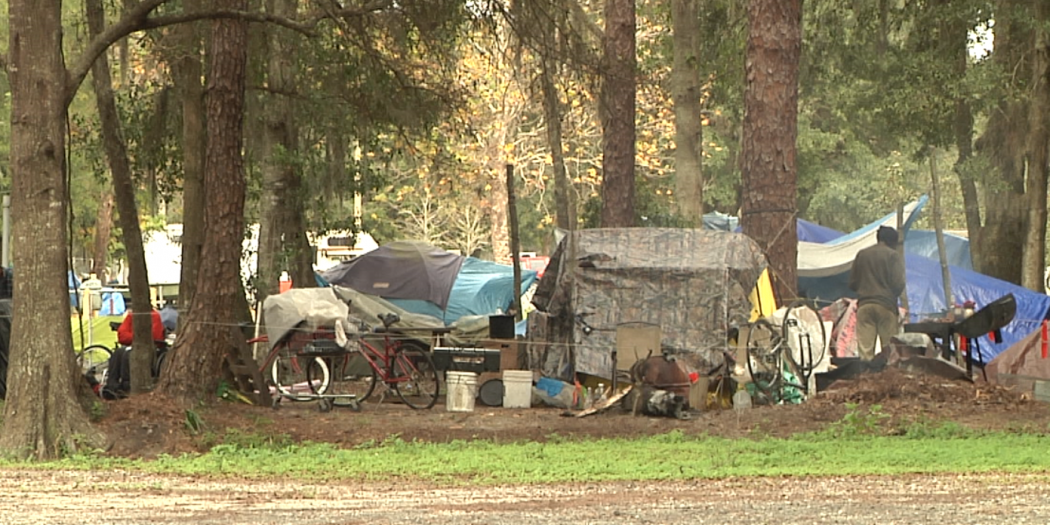 Dignity Village was home to 158 homeless people and 180 tents as of January 8, 2016. That number has grown nearly 200 people as the city of Gainesville and Alachua County look to close the property by the end of 2019. (WUFT News)

Culturally rich and citizen-centered, downtown Gainesville offers many avenues for residents and visitors to enjoy the city’s history. Red brick cobblestone, a historic theatre and locally-owned businesses line the streets with Southern hospitality — as do Gainesville’s chronically homeless.

As the city and Alachua County move forward with plans to close the Dignity Village homeless camp, some business owners worry more homeless people could move into downtown, hurting businesses and panhandling patrons.

The issue of homelessness in Alachua County sparked the 2014 construction of GRACE Marketplace, a homeless shelter and empowerment center, located at 3055 NE 28th Dr. in Gainesville. GRACE offers the basic necessities of food and shelter to its residents and aids the homeless through services designed to get them off the street, into permanent housing and gainfully employed.

In 2005, the Alachua County Coalition for the Homeless and Hungry and the city of Gainesville collaborated on a report outlining a 10-year plan to end homelessness; GRACE was a cornerstone of that plan. After addressing some of the root causes of homelessness, lack of affordable housing and livable wage, the plan called for a place that offered all of the services people needed to get back on their feet.

Looking for an area to satisfy this plan, local officials suggested the Gainesville Correctional Institution, which closed in 2011. On May 5, 2014, the former jail was reopened as GRACE Marketplace. There were only 114 beds in GRACE, which still left many without shelter. Those who either couldn’t get a spot in GRACE or chose not to because of its regulations and rules created a city of tents adjacent to GRACE, known as Dignity Village.

Residents at GRACE are expected to work with the center to end their homelessness as quickly as possible. Those who live in Dignity Village are also able to take advantage of the food and other services GRACE offers.

With about 200 people living in Dignity Village, violence, drugs and rumors of human trafficking plague the camp, according to a 15-page Org Code Consulting Inc. report submitted to the city and county in 2016. While the city and county plan to transition some village residents into GRACE, others will choose to go elsewhere.

Together, the city and GRACE plan to connect some of the displaced residents with relatives in Florida who may be willing to take them in. Once relatives have agreed to help, the city will purchase bus tickets for those wanting to relocate. GRACE only provides housing for adults, so families with children need to find somewhere else to live such as St. Francis House, located at 413 S. Main St., that provides shelter for homeless families.

According to a poll administered this year by GRACE employees to the approximately 200 Dignity Village tenants, 80% said they can be connected with a relative, 60% said they would prefer a permanent campground on the GRACE campus and 10 to 20% of residents said neither of those options would work for them because they don’t want to live under someone else’s rules.

That 10 to 20% must leave when Dignity Village closes, increasing the possibility of an influx of homeless people in the downtown area. Among business owners, this leads to the rising concern of safety.

“One of my first weeks at the record store, one person came in really high on drugs and started yelling,” said Heather Halak, former employee of Hear Again Records and current owner of Third House Books. “When I asked him to leave and insinuated he was under the influence, he grabbed the glass coffee mug that held our office supplies on the counter and threw it at me.”

Halak said the problem lies with the city and not necessarily with the homeless people.

“There’s a stigma that all homeless people are doing drugs or illegal things, but they need to stop being criminalized. It’s not their fault they’re poor,” Halak said. “I think there’s enough money in Alachua County that could be dedicated to helping homeless people and getting them resources.”

The idea that the city should be doing more to help the homeless is commonly shared among downtown business owners. Layne Wrighton, the owner of Maude’s Classic Cafe, said the city and county need to better care for the homeless people, particularly their mental health, before they are able to transition anywhere.

Although the safety of her patrons and employees is her biggest concern, Wrighton feels sympathy for the homeless.

“Some of these homeless people can be erratic and dangerous because they’re mentally ill,” Wrighton said. “But no one asks them their mental state before kicking them out.”

Wrighton saw the downtown homeless population increase when Alachua County shut down the Sweetwater Branch homeless camp, located at the intersection of Southwest Williston Road and Southwest 16th Avenue, in 2016. She worries the same thing will happen this time, endangering her employees and customers.

“I’ve had ashtrays thrown at me. I’ve been called so many names, but I mostly just feel bad for them, and the hand they’ve been dealt,” Wrighton said. “No one cares about their mental health; they just want to keep (the homeless people) away.”

DeCarmine said it is the responsibility of the entire community to care for the weaker members, and while homelessness in Alachua County is the lowest it has been in five years, he said the number of visibly homeless people has increased. This is largely due to panhandling, he said, which is protected under the U.S. Constitution.

Victoria Carrillo, 20, a University of Florida student from Hollywood, Florida, said the homeless population used to deter her from going downtown.

“Once, I was downtown with my family, and one homeless man approached us asking for money,” Carrillo said. “My mom rummaged through her purse and gave him the available money she had. After she handed it to him, he said that it better not be any of that funny Mexican money. My dad, who is Mexican, became instantly offended, and so did I.”

Chip Skinner, spokesman for the city of Gainesville, said the city is trying to keep better track of the homeless by moving them into GRACE and keeping them within the fence of the homeless shelter, but once they leave GRACE, the city can only do so much.

The most frequent complaint to the Gainesville Police Department about the homeless people downtown is their panhandling, but law enforcement officials are not able to intervene. Asking the homeless to be less aggressive is the most the city can do for panhandling cases unless a crime is committed.

“Panhandling has been identified as a First Amendment right,” Skinner said. “So the panhandling ordinance is unenforceable.”

The city and county agreed in May to stop allowing new residents to move into Dignity Village by October 1 with plans to close the camp entirely by the end of the year.