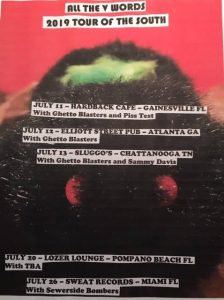 All The V Words was formed in 2017 by guitarist Vivian Volume, a/k/a Rich DeFinis (The Chant, Stan Still Dance Band) and guitarist Valora Vice, a/k/a/ Julie Blumel (Angry Pudding). They released one song on the DHMC6 Companion CD for the 6th Annual Dan Hosker Music Continuum. Rounding out the current lineup are Vic Vile on drums (Chris Dino of The Ruins) and Vom Vargas on bass (Jeff Hodapp of Roach Motel/Drug Czars/Morbid Opera).

All The V Words’ eponymous debut album was recorded at The Shack North in Hialeah by Ferny Coipel. The album All The V Words released June 14, 2019 and is available on the group’s Bandcamp page and a variety of streaming services including Amazon Music, Apple Music, and Spotify.

They’ll be playing the Hardback Cafe in Gainesville on Thursday, July 11 (920 NW 2nd St.) with The Ghetto Blasters from Chattanooga and Gainesville’s Piss Test.

Some of the lyrics contain language that some listeners may find objectionable.

Glenn Richards is Operations Coordinator and local host for Morning Edition on WUFT-FM. His background includes 30+ years of radio in South Florida as an air personality, promotion director, and morning show producer (WSHE, WZTA, & WFLC). His previous education includes a Bachelor of Science in Communication from the University of Miami where he was also general manager of WVUM-FM. Upon his arrival in Gainesville in 2006 to pursue a telecommunication master’s degree at the University of Florida College of Journalism and Communications, he worked as an air personality at WRUF-FM (both Rock104 and Country 103.7 The Gator). One of Glenn’s passions is local music. Since 1990, he has produced and hosted local music programs in both South Florida and Gainesville, playing demos and independent releases from unsigned artists, many of whom went on to national prominence including: Marilyn Manson, Sister Hazel, For Squirrels, Matchbox 20, Saigon Kick, Mary Karlzen, Nil Lara, Hundred Waters, and more.
Previous Former Gainesville Airport Employee Chooses Trial Over Plea Deal In Missing Money Case
Next Duke Solar Projects Get Go-Ahead