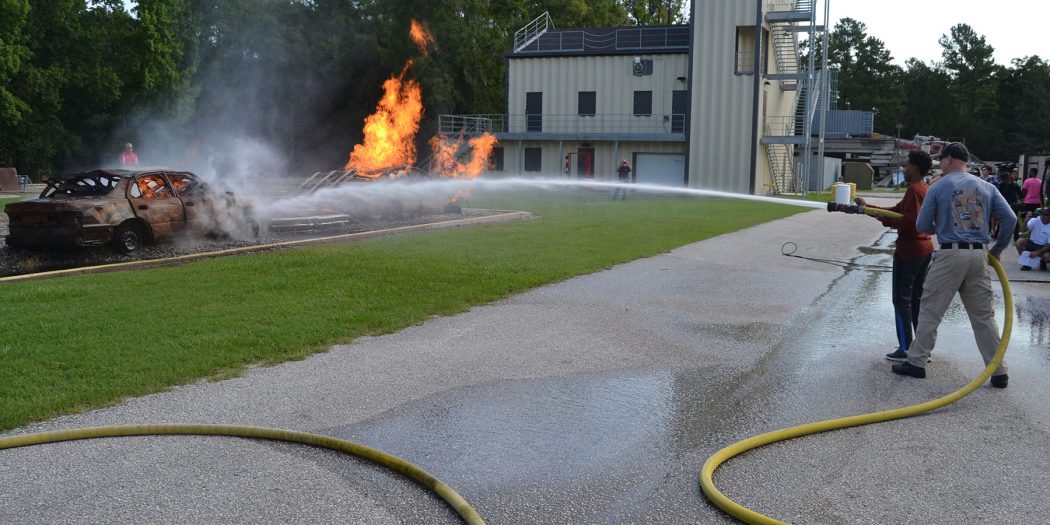 A firefighter helps one of the campers to use the fire hose during the fire demonstration. (Eve Rosen/WUFT News)

The Children’s Burn Camp of North Florida, also known as Camp Amigo, kicked off its week of adventure on Monday at the Florida State Fire College in Ocala, which was picked due to its location, amenities and dormitories.

The weeklong camp was founded in 2001 after several firefighters from Tallahassee attended a camp that was run by the Southeast Burn Foundation in Florida. One of these firefighters was Rusty Roberts, a founder and the president of Camp Amigo. Roberts created the camp as an annual event and made the group a nonprofit organization. It became the Children’s Burn Camp of North Florida.

Camp Amigo was made for kids that range from ages 6 to 18 who have physical or emotional scars from burns, whether it be from fire or another type of burn. It gives them a place for them to be themselves and to build a network of support that could last throughout their lifetimes. The kids have a support group that meets twice a week during the duration of the camp. For some, attending this camp is their vacation.

“It’s not just a fun time. These kids are building a community of burn survivors and they are learning for each other,” Roberts said. “We work on our coping skills because these kids are probably the only kids in their school with a burn injury or maybe in the whole town.”

The camp was originally hosted at William J. Rish Recreational Park, or the Billy Joe Rish State Park, on Cape San Blas in the Florida Panhandle, but moved to the Florida State Fire College after Hurricane Michael rendered the park unusable.

“It pretty much got a direct hit from Hurricane Michael, and while the rest of the Panhandle is suffering,” Roberts said, “that park is closed.”

At the camp, the kids can take part in many different activities that are aimed to help them overcome their fears and foster relationships with firefighters and other burn survivors. The activities are also used to show the kids what rescuers experience while saving people.

During Monday morning’s activities, the kids had several activity stations to which they rotated every hour. Some of these activities included learning how to rappel down the side of a building, using a fire extinguisher, and extricating patients from vehicles. The day started off with a fire demonstration with the kids handling the hose in order to put out a controlled car fire.

Together, they learn to overcome their fears and use peers as a support system for something most kids don’t understand.

Nam Le, one of the camp counselors, was in a hit-and-run car accident when he was 21 in 2012. His car was flipped upside down and 75 percent of his body was burned. He spent the first two years of his recovery wheelchair-bound but has recovered and is now walking.

“There is such a big community out there, and you are not alone,” Le said. “There are a lot of people who have struggled with having burns in different ways, and we are out there.”

Tyrese Wright, who was the first one to rappel down the building, has been going to the camp for two years.

“When you come here,” Wright said, “you don’t want to go back home.”

Everitt is a reporter for WUFT News who can be reached by emailing news@wuft.org or calling 352-392-6397.
Previous Florida Cabinet Members Report Net Worths For 2018
Next The Point, July 9, 2019: How A Newspaper’s Reporting Played A Role In Jeffrey Epstein’s Arrest