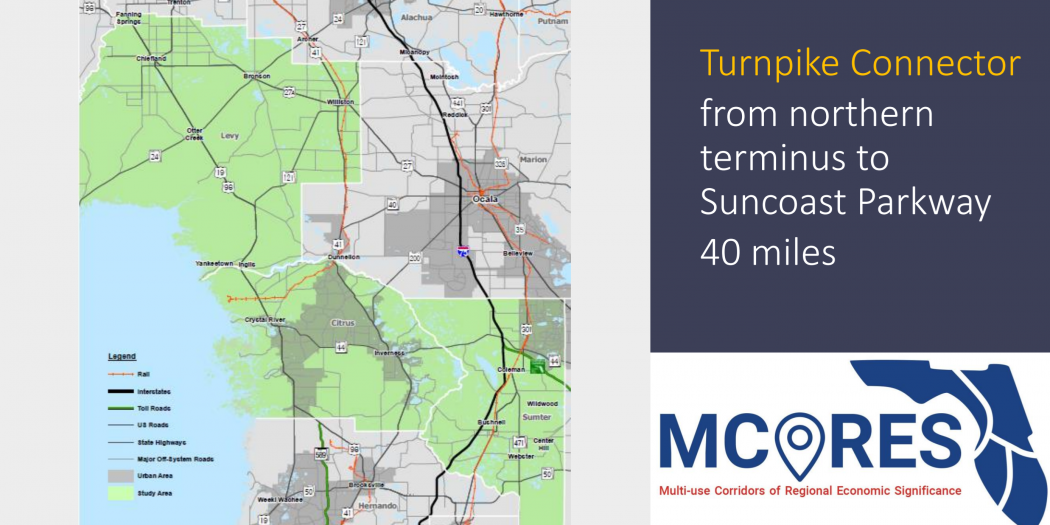 Under a new state law, the state is studying the Suncoast Connector's possible path through eight Florida counties. (Courtesy of FDOT)

TALLAHASSEE — Florida’s record $90.98 billion spending plan for next fiscal year and more than 100 new laws will hit the books Monday.

The new laws, passed by the Legislature this spring and signed by Gov. Ron DeSantis, deal with issues ranging from bans on texting while driving and vaping to adding toll roads and preventing local governments from uprooting vegetable gardens.

Among the laws taking effect Monday:

The $90.98 billion spending plan (SB 2500) for the fiscal year that starts Monday includes $685 million for the Everglades and other water projects and a boost of $242 in per-student funding for public schools. Among other things, it includes money for post-Hurricane Michael recovery efforts and $5.4 billion in reserves.

Also, a budget “implementing” bill (SB 2502) includes numerous provisions, such as setting the stage for a review of a key part of the state’s school-funding formula. The bill also provides travel costs to and from Tallahassee for Miami-based Lt. Gov. Jeanette Nunez and Supreme Court justices who live outside Leon County and seeks to prohibit Agriculture Commissioner Nikki Fried’s photo from appearing on gas-pump inspection stickers.

Another budget-related bill (HB 5301) moves the functions of the Agency for State Technology to the Department of Management Services and creates a task force to try to improve the state’s cybersecurity.

The state is ready to move forward with a wide-ranging education bill (SB 7070) that includes creating a new school-voucher program. The “Family Empowerment Scholarship Program,” will allow state money to pay for as many as 18,000 students to attend private schools during the upcoming year, with the number of students slowly increasing in future years.

Also taking effect is a measure (SB 190) that changes how public universities and colleges will fund construction projects, an outgrowth of a financial scandal at the University of Central Florida.

After major problems last year with red tide along the state’s shorelines, a new law (SB 1552) establishes the Florida Red Tide Mitigation and Technology Development Initiative and provides $3 million a year for the next five years to research efforts.

Also taking effect is a measure (HB 5401) that shifts 19 Florida Fish and Wildlife Conservation Commission law-enforcement officers to the Department of Environmental Protection.

In addition to the laws, a new shark fishing rule by the Florida Fish and Wildlife Conservation Commission goes into effect Monday. That rule, in part, bans shore-based anglers from using fish parts, bones and blood to attract sharks.

House Speaker Jose Oliva, R-Miami Lakes, made revamping health care a top priority this year, and several new laws are ready to take effect, including a measure (HB 19) aimed at allowing lower-cost prescription drug imports from Canada and other countries.

Also, a new law (HB 21) repeals the state’s “certificate of need” approval process for building hospitals and adding certain services such as transplant programs. Another Oliva priority (HB 23) sets up a regulatory framework for telehealth, which involves using the internet and other technology to provide health services remotely.

The House also spearheaded a new law (HB 1113) that makes changes to the state-employee health insurance program and creates “shared savings” programs. Those programs will allow health insurers to create incentive programs to encourage policyholders to shop for health services, with the policyholders able to share in savings.,

Also taking effect Monday is a measure (SB 366) that will allow counties to approve needle-exchange programs to try to combat the spread of infectious diseases by intravenous drug users. The plan expands a needle-exchange pilot program in Miami-Dade County.

With a change in federal law clearing the way for a hemp industry, Florida lawmakers moved quickly on the issue. A measure taking effect Monday (SB 1020) creates a hemp program in the Florida Department of Agriculture and Consumer Services. The program will provide a regulatory framework that includes requiring licenses for people or businesses that want to grow hemp and requiring them to provide detailed information about where hemp would be cultivated.

Most of a law banning so-called sanctuary cities (SB 168) will take effect. The highly controversial measure, in part, directs local law-enforcement agencies to “use their best efforts to support the enforcement of federal immigration law.”

After years of battles about the issue, a new law (HB 7065) overhauls the controversial insurance practice known as assignment of benefits. The measure, in part, limits attorney fees in so-called AOB lawsuits and allows insurers to offer policies that restrict or do not allow assignment of benefits. AOB is a decades-old practice that has become controversial in recent years because of arguments by insurers that it has become filled with fraud and litigation.

Another new law (HB 487) will allow paramedics to carry firearms while participating with law-enforcement officers in certain “high risk” situations.

Meanwhile, a measure (HB 595) gives legal immunity to people under age 21 who call seeking medical help for someone in danger of a drug overdose.

A tougher ban (HB 107) on texting while driving will take effect Monday, with police able to pull over drivers for tapping out messages behind the wheel. In the past, motorists could only be cited if they were pulled over for other reasons. While the change takes effect Monday, it will be phased in, with warnings issued starting Oct. 1 and tickets starting to be issued Jan. 1.

Also Monday, a plan (SB 7068) to build and expand toll roads will move forward. The plan, a top priority of Senate President Bill Galvano, R-Bradenton, seeks to expand the Suncoast Parkway from the Tampa Bay area to the Georgia border; extend the Florida Turnpike west to connect with the Suncoast Parkway; and add a new multi-use corridor, including a toll road, from Polk County to Collier County.

Nearly eight months after voters approved a constitutional amendment to ban vaping and use of electronic cigarettes in most indoor workplaces, a law (SB 7012) will take effect to carry out the amendment. The ban is similar to a long-standing law that prohibits smoking tobacco in indoor workplaces.

The News Service of Florida is a wire service to which WUFT News subscribes.
Previous The Point, June 28, 2019: Alachua County Leaders Want To See A Roadside Park For Fishing Within Paynes Prairie
Next Why Is The Parking Garage Staircase At Gainesville’s VA Hospital Higher Than The Parking Levels?