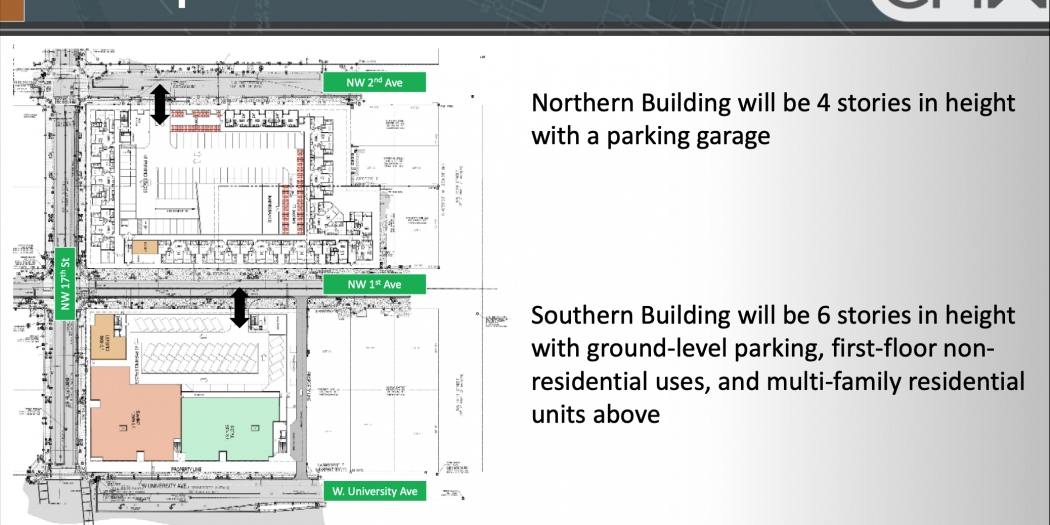 A map from CHW Professional Consultants' presentation to the city shows the location of the proposed development on the current site of the Swamp Restaurant and other businesses. (Courtesy of CHW/City of Gainesville)

Gainesville City Plan Board voted 4-2 Thursday to allow the redevelopment of the site where The Swamp Restaurant stands today.

The vote approved a special use permit that will increase the density of two apartment buildings on University Avenue, which will include a rebuilt version of The Swamp. The permit will allow an additional 20 units per acre on top of the 60 units per acre limit, making it 80 units per acre total. The approval came with the condition that the city architect be involved in the development plan review as well as the building plan review on materials and other features of the project.

908 Group also developed The Nine student apartments at 1245 SW 11th Ave., which opened a year ago.

Much to public controversy, the original plan for this apartment complex involved demolishing and replacing several local businesses in Midtown, including Swamp, Grill Fresh, Larry’s Giant Subs and others.

The developers released a news release on May 1 that the Swamp will stay in its current location. The six-story apartment complex is going to be built over the Swamp, and its porch will also remain.

“That patio is an important part of the feel of that intersection, not just on game day, but anytime that you are walking through there,” said Craig Brashier, who is the director of planning for CHW Professional Consultants, which is helping design the project.

Over the past couple of months, developers have had several project design meetings, in which they received feedback that helped form a better project design. One of these meetings was a neighborhood workshop in April.

“At the neighborhood workshop, we realized the importance and the significance of the restaurant space on the site and the patio and the open area that is included as part of that site,” Brashier said. “Immediately we changed the building footprint to preserve that.”

“I’ve felt very frustrated,” Clark said, “to not have anything to grab onto to specifically address affordable housing.”

Several University of Florida students spoke up against both approving the permit and the construction of the apartment complexes. Camille Woodhouse is worried about the possible cost of rent.

“As a full-time student at UF, it’s hard to find affordable student housing,” Woodhouse said, lamenting the rent costs at The Nine, 908 Group’s other apartment complex. “I work full time as well, 40 hours a week at $19 an hour, and I still can’t afford that.”

Richard Johnson, a UF alumnus, used to live in Gainesville but is now in Brooklyn.

With the approval of the special use permit, 908 Group and CHW Professional Consultants will likely submit development plans for the city’s review later this year. Construction could begin in January, the developers have said, with the complex opening in 2021.

Everitt is a reporter for WUFT News who can be reached by emailing news@wuft.org or calling 352-392-6397.
Previous Democratic Presidential Debate, Night 2: Live Fact-Checking And Analysis
Next The Point, June 28, 2019: Alachua County Leaders Want To See A Roadside Park For Fishing Within Paynes Prairie