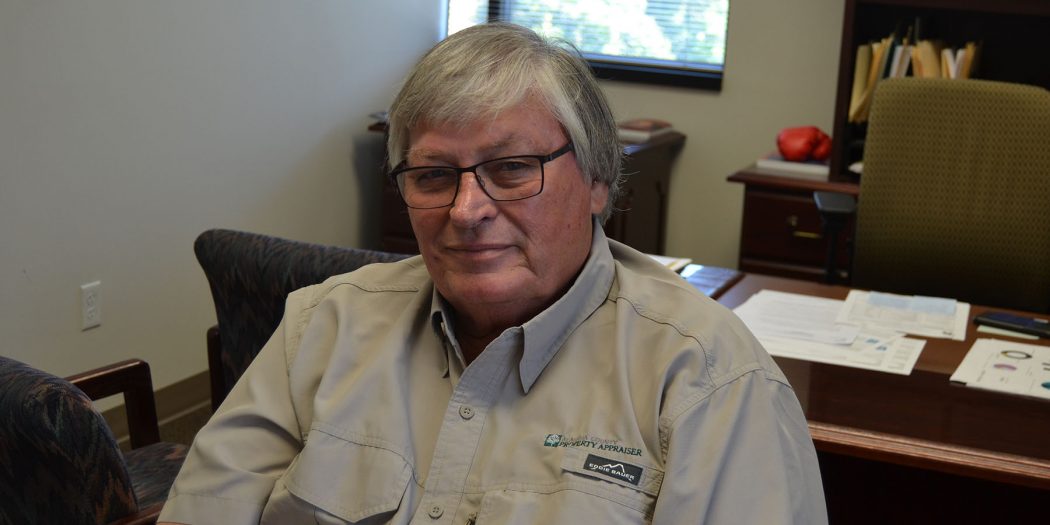 Property Appraiser Ed Crapo, who plans to retire after the 2020 election, in his office. (Eve Rosen/WUFT News)

Alachua County Property Appraiser Ed Crapo Is Retiring After 40 Years In Office. Here’s How His Job Has Changed

After 40 years as the Alachua County Property Appraiser, Ed Crapo will not be seeking reelection.

He was originally elected in 1980 and has been reelected for 10 consecutive terms. Crapo has seen many changes to the property appraiser’s office, as well as building and development patterns around Alachua County.

He’s seen the complete shift from the analog age to a more digital environment.

“When I first took office, we had a wall of file cabinets. Every filing cabinet had a little card in it for each piece of property in Alachua County,” Crapo said. “Any time when it came to revalue things or anything else, someone had to go and pull that card.”

Compare that to today, when Crapo’s office hosts a wide range of Geographic Information System (GIS) data on its site for the public to download and use.

The property appraiser’s office in 1980 had a first-generation computer, but it was used for storage and not used to calculate any values.

“I have people that tell me nowadays ‘You know, Ed, the first computer I ever saw was on your desk,’” Crapo said. “When I worked for my predecessor in 1977, we didn’t have computers. We worked on our desktops with calculators. We had one very complicated calculator that I never did learn how to use.”

Livestock was once considered property in Alachua County, which meant it could be taxed. People would take their livestock to other counties in order for them to not be taxed, Crapo recalled. Livestock was later changed to be inventory, so it’s no longer taxable.

When Crapo first took office, physical maps were still used. People would have to go into the property appraiser’s office to look at paper maps of parcels of properties.

Sales were all done by hand.

Gainesville and Alachua County have changed significantly in the 40 years that Crapo has been in office. The Hampton Inn on Southeast 1st avenue used to be empty office buildings, and there were several department stores on Main Street, including Wilson’s department store and Parker’s Office Supply. Gainesville has become more developed with the University of Florida and Midtown, and the urban areas of outer Alachua County are also rapidly developing.

Crapo said he will miss the many people with whom he’s worked, along with some interesting taxpayers that he would not have met if he was not in office.

“I don’t think they will lock me out, so I’ll come by and visit,” Crapo said. “Alachua County is just filled with some totally interesting folks. I mean they are just little hidden gems.”

“There was always a lot of the same faces, and what they were, are people who are doing something similar to what I was doing, they were in their own professional organizations, they had become these gurus or leaders,” Crapo said.

Crapo has been able to see the development in Alachua and High Springs, as well as urban areas right outside of Gainesville.

He believes the traits his successor should have are patience and tolerance. He also says they need to have common sense.

“The one thing you have to know is when people are feeding you a lie,” Crapo said. “You’ve got to know when we are talking reality and when we are not.”

Jeff Boyd has been working at the property appraiser’s office for a little over a year. He originally started as an investigator but was promoted to the office’s spokesman

“He treats us all like his family — he’s incredible. We are going to miss him,” Boyd said.

Buddy Irby, who was clerk of the circuit court until 2016, also served for 40 years in total but as the supervisor of elections for the first 16 of those years.

Irby’s split tenure means Crapo is the longest-serving elected official to serve as a constitutional officer in Alachua County.

Below: Hear a portion of WUFT’s interview with Crapo.

Everitt is a reporter for WUFT News who can be reached by emailing news@wuft.org or calling 352-392-6397.
Previous Democratic Presidential Debate, Night 1: Live Fact-Checking And Analysis
Next The Point, June 27, 2019: From Property Cards To GIS: How The Property Appraiser’s Office Has Evolved During Ed Crapo’s Tenure