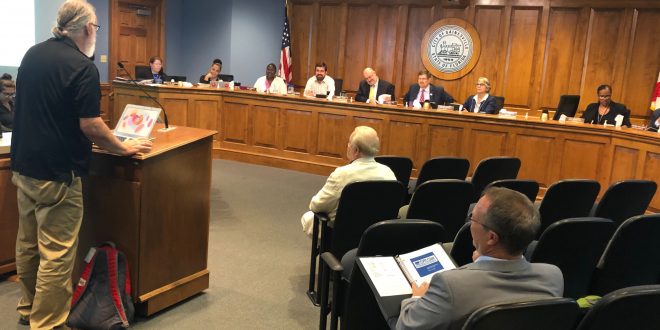 Deciding it needs more time to consider options, the Gainesville City Commission on Thursday voted to pursue partnerships with major area entities as well as different funding options in the quest for a municipal broadband network.

The commission dispatched Mayor Lauren Poe to send letters to local municipalities, the Alachua County Commission, the University of Florida and Sante Fe College, and the Alachua County School District to see if they wish to partner with the city in the effort.

City staff have four months to look deeper into state laws concerning the expansion of broadband by the city, and to consult with bond counsel while also seeking the new funding possibilities.

The commission also wants two surveys conducted within four months: one focused on market research to better define a pricing structure for broadband internet service; the other a digital divide study to see what price points would achieve the greatest reach.

Poe told WUFT News afterward that he understands the challenges ahead and is ready to evaluate all possible scenarios for providing better internet for Gainesville residents.

“Everything is on the table for me,” he said. “What I know is that what we have now is probably not what our residents need or want. So ways that we can improve upon that will be the priority for me going forward.”

The commission acted after Doug Dawson, a telecommunications consultant from North Carolina, presented the findings of his months-long analysis.

In a nearly 200-page report presented to a commission committee in April, Dawson, president of CCG Consulting, concluded that Gainesville can become its own internet service provider within a few years – but not without overcoming considerable hurdles.

While noting that a number of assumptions need to be met to achieve its goal, Dawson told the commission Thursday that the city could succeed with a $50 gigabit broadband product.

“The bottom line is if everything goes well, this could work,” he said.

According to Dawson, attracting households to pay for the service would not be easy.

“If you just did the city limits, (GRU) would have to sell 540 new customers a month for five years in order to make this work,” he said.

Adding that 850 new customers a month would be needed if the whole county is involved, the consultant, who the city will pay up to $105,000 for his analysis, said: “That’s a really big challenge. I can’t stress to you how much of a challenge that is.”

District 1 Commissioner Gigi Simmons, said the city would need help with building a network and that she had a lot of answered questions about the matter.

“I think this is something that could address the need in the community, but it’s a heavy lift,” Simmons said. “We can’t do it alone.”

At-large Commissioner Gail Johnson said she was skeptical due to the risks involved, the financing and even the necessity of the initiative. Johnson also said “it feels like a David and Goliath situation” if the city was to compete with incumbent internet service providers.

At-large Commissioner Helen Warren said she was uncertain about how quickly the city could move forward with building the network.

“I’m pretty certain this is one of the things that will not get done over the next year,” Warren said. “With all of the things we’ve got to work on, I would love to see this get done sometime while I’m still alive, but I don’t see it happening real soon.”

District 4 Commissioner Adrian Hayes-Santos said that while he supports the commission’s efforts to garner more information, he was encouraged by what Dawson’s report found.

According to Dawson’s study, the estimated cost of bond financing for expanding broadband service within Gainesville city limits is $116.7 million. That number would rise to $213.5 million if fiber is built in surrounding cities – which are Alachua, Archer, Hawthorne, High Springs, Newberry and Waldo, according to the report.

The commission likely faces a challenge if it decides to borrow a revenue bond with a term greater than 15 years. According to the study, Florida law would mandate a city referendum.

CCG also conducted a survey of 370 potential residential customers. It found that 38% of respondents support the idea of Gainesville building a municipal network, while 35% said they needed more information and 27% did not support the idea.

Carla Lewis-Miles, a board member for the Greater Duval Neighborhood Association, questioned how the survey was conducted and whether the city could afford the initiative.

Another city resident, Brian O’Brien, also said he doubted the city could afford it.

“I don’t have an objection to aspirational goals,” O’Brien said. “I think that many of you have fine intentions, but we have to live within a fiscal responsibility that the taxpayers can afford.”

Bryan Eastman, a co-founder of Connected Gainesville, an organization fighting for better rates and reliability for the city’s internet, supported the findings in the study.

“I was extremely excited about the report,” Eastman said. “It made it very clear that there is a very credible way to move forward – that the most likely outcome is making a transformational change in our city, expanding broadband internet out across the community while at the same time making revenue for our city.”

“We already have the infrastructure in place; it’s already there,” Johnson told WUFT News. “If we can help the city in any way, we have the same goal: We get everybody connected and closing that digital divide. So, any way we can help them do that, we’re willing.”

Joseph is a reporter for WUFT News who can be reached by emailing news@wuft.org or calling 352-392-6397.
Previous Those Stickers With Nikki Fried’s Face On Florida Gas Pumps? They’re Staying For Now
Next The Point, June 21, 2019: How Gainesville’s City Commission Reacted To That Broadband Internet Analysis