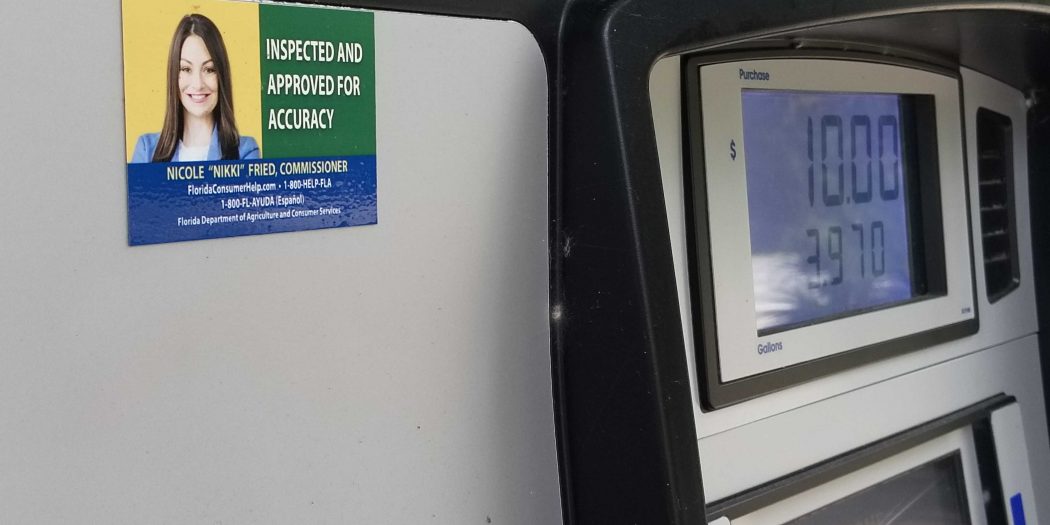 With Department of Agriculture and Consumer Services inspectors conducting sweeps statewide for illegal “skimmer” devices intended to steal credit card information, many pumps will have the bright yellow, green and blue stickers well beyond July 1, the start of the upcoming fiscal year.

Asked about the stickers last week, Fried said she will follow a requirement Republican leaders placed in a budget implementing bill (SB 2502) to limit stickers affixed to gas pumps to only “a combination of lettering, numbering, words, or the department logo.” Gov. Ron DeSantis is expected to sign the implementing bill, possibly as early as Friday.

“The implementing bill is tied to the budget, so during the 2019-2020 fiscal year we will not be able to purchase any new stickers,” Fried said when asked about the fate of the stickers.

The only statewide elected Democrat, Fried drew Republican ire when she started to replace stickers from when Republican Adam Putnam was the agriculture commissioner.

The concern is the stickers with Fried’s picture are being used to gain free political exposure for an eventual re-election bid or a run for higher office in 2022.

Under Putnam, the stickers featured the department logo, along with a code intended to direct consumers to an online help site to express concerns about fraud.

Fried said the stickers are about accountability. In addition to Fried’s face, the new stickers say, “inspected and approved for accuracy,” along with her name and a consumer assistance web address and phone number.

“When our inspectors went out to sweep all the skimmers across the state, our stickers have been placed up there so the consumers understand when they see fraud happening at the pump, they know exactly who to call,” Fried said.

Jim Turner is a reporter for the News Service of Florida, a wire service to which WUFT News subscribes.
Previous The Point, June 20, 2019: At Ocala’s Struggling Oakcrest Elementary, This Teacher Is The Calm Her Students Need
Next Gainesville City Commission Votes to Seek Help and More Information on Broadband Options

The Senate is holding a trial on the impeachment of President Trump, who is accused by the U.S. House of abusing his power and obstructing Congress.