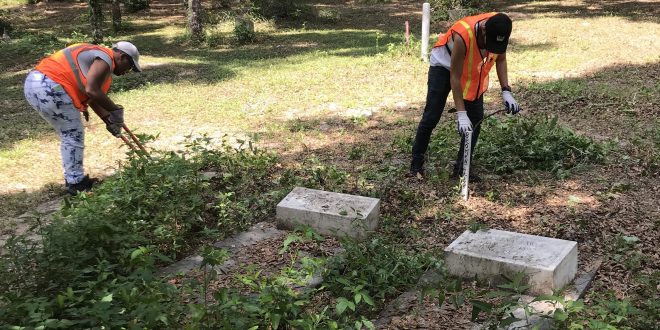 The tombstones in the Bethlehem Methodist Episcopal Cemetery lie on the ground covered in dirt, broken from their bases with weathered inscriptions faintly showing dates as early as 1822, about 43 years before slavery was abolished.

One of the earliest known graves in the Archer cemetery belongs to Roberta Lopez’s great grandfather, Amos Haines. Lopez, who leads Bethlehem Methodist Episcopal Cemetery Restoration Organization, wants to make sure those buried there are not forgotten.

“I want to find out if my great grandfather was a slave because he was born in 1848 and slavery wasn’t over until 1865, between ’65 and ’67,” Lopez said. ”So I want to find out whether or not these people are associated with that plantation that was right here.”

The cemetery was established in 1875 as part of the Bethlehem Methodist Episcopal Church, a church built by freed slaves. There are 80 known burials in the cemetery and the earliest of those potentially belong to former slaves of the Cottonwood Plantation in Archer or the Haile Plantation in Gainesville, according to the Florida Trust for Historic Preservation.

Lopez is seeking a grant to develop a conservation plan for the cemetery that includes identifying and documenting the people buried.

The University of Florida Historic Preservation Program has partnered with the restoration organization to write and apply for a $25,000 Small Matching Grant from the Florida Division of Historic Resources.

The grant proposal requests $12,500 from the Florida Division of Historic Resources. The remaining grant money consists of a cash match of $3,125 from fundraising and in-kind donations of $9,375 from volunteer services and services by organizations and businesses willing to join the restoration efforts.

UF’s partnership for the grant will allow the organization to access grant funds despite not being a 501(c)(3) nonprofit organization, a tax-exempt status granting the organization access to grant money and income and property tax exemption. The organization lost its nonprofit status when Lopez’s sister Clyde Williams, founder and president, became ill and unable to continue maintaining the cemetery.

The Small Matching Grant provides funding to assist preservation efforts for significant historical resources in Florida. In previous years, the grant has been awarded to restoration efforts of sites in Alachua County including the Micanopy Historic Cemetery and Historic Haile Homestead, according to the Florida Division of Historic Resources.

Lopez received letters of support for the cemetery from the Archer City Commission, the Archer Historical Society, the Alachua County Board of Commissioners and Florida House Representative Clovis Watson, Jr. The letters were submitted to the Florida Division of Historic Resources.

“It’s a historical black cemetery, it goes back to the 1800s. It’s also a part of the truth and reconciliation process that we’re having here in the county in terms of the Jim Crow laws and segregation and in terms of how African Americans were treated during that period of time,” said Alachua County Commissioner Charles Chestnut, IV. “So it’s a process of making sure that those types of sites are recognized.”

Morris Hylton III, director of the UF Historic Preservation Program, said the cemetery has made progress towards restoration through volunteer efforts, but outside expertise is needed to plan its conservation in the future.

Hylton said the challenges the cemetery has faced include the need for a master plan and a lack of funding.

In May, the cemetery was added to the Florida Trust for Historic Preservation’s 2019 Florida’s 11 to Save List. The list is designed to raise awareness for endangered historic sites in Florida. Other sites on the list include Fish Island in St. Augustine and Rollins College in Winter Park.

Sheron Cheesborough, Lopez’s sister from Newberry, joined the most recent cleanup when Lopez told her about her family buried in the cemetery.

“My grandmother is from here and her mother is placed out here. It makes me feel that I’m connected because I didn’t know my great grandmother,” Cheesborough said. “This places me in a place where even though they have ceased, I’m in the midst of history. Not only being connected and seeing where they are but also part of the history that has gone on from 1822.”

After Williams, 93, became ill and moved to Atlanta to stay with her daughter, Lopez took over the restoration of the cemetery. Lopez continues to organize cleanups attended by community organizations and residents whose ancestors are buried in the cemetery.

Lopez, 80, said she doesn’t know how long she will be able to continue maintaining the cemetery.

Lopez recently united with the remaining four living members of the organization’s original board to plan the recruitment of new members and an election for a new board. After a new board is established, the organization will find out how to get their nonprofit status again so they can begin to raise money and apply for more grants in the event they are not chosen this year.

“I’m hoping that if we get enough volunteers along with the board that’s there, and get organized, that they will carry on,” Lopez said. “That’s the only thing we can hope for.”