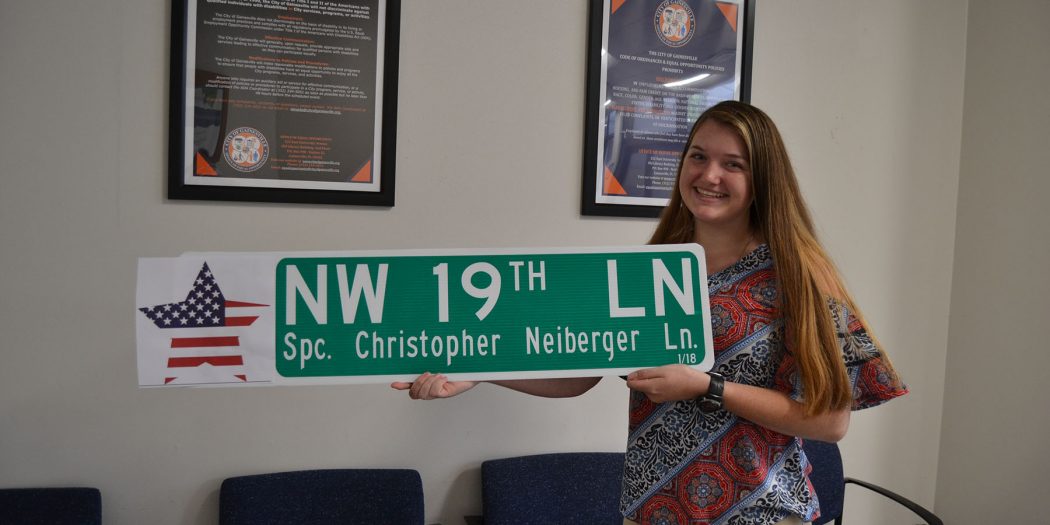 Abigail Islam displays an example of what street signs will look like with the added decal. It is aimed at making the signs more noticeable and therefore better honoring fallen service members and police officers. (Eve Rosen/WUFT News)

Thursday marked the 75th anniversary of the Allied forces in World War II invading Normandy, and in Gainesville, it marked the Gainesville City Commission’s honoring of fallen service members and public safety officers.

To do so, the city will add decals to city street signs already named after fallen service members and public safety officers that were killed in the line of duty.

The project came to life about a year and a half ago and started with the idea of lining Archer Road, which the City of Gainesville does not control, with American flags on every lamppost.

This idea was too expensive, and it required too much maintenance.

Eventually, the idea emerged to put a star-shaped flag decal on the streets that have already been named after fallen service members.

“The thing is, they aren’t very identifiable, so under the street name there is a little name and you probably wouldn’t even notice it,” Mayor Lauren Poe said. “This was a way to bring more attention so that people would see that graphic and would realize that street was named after our fallen heroes.”

Islam is a member of the Young Marines Organization, and one of its main focuses is veteran appreciation.

She herself is a member of a gold star family: Her brother Joshua served in the U.S. Marine Corps and died during a training exercise. He has a street sign named after him in Gainesville.

“Gainesville is home to over 5,000 veterans. Both active duty and veterans who have served in the past, and I believe that to honor those who have never made it home I think that adding more attention to the street signs with the addition of the graphic would be good for them,” Islam said.

Her parents, James and Donna Islam, are in the planning phase of creating a monument to go at Veterans Memorial Park, 7400 SW 41st Pl. It will be called the Gold Star Family Memorial Monument and will be surrounded by a garden. The Gainesville Rotary Club is helping to redesign it.

The decal is a red, white and blue star and it will be placed next to the street names on their size. City of Gainesville staff originally came up with another decal idea but decided Islam’s graphic was best suited for the street signs.

“Thanks for coming up with this,” city commissioner David Arreola told her. “It’s very creative, and it gives us a sense of honor and honors their memories and kept them alive.”

Correction appended: A previous version of this story stated that the decals would honor fallen soldiers, a term that only applies to members of the U.S. Army. The decals will, in fact, honor fallen service members from all U.S. military branches.

Everitt is a reporter for WUFT News who can be reached by emailing news@wuft.org or calling 352-392-6397.
Previous The Point, June 6, 2019: The Possible Impact Of Gainesville’s Budget Gap On Ratepayers And Property Owners
Next The Point, June 7, 2019: New Red, White And Blue Star Decals Will Soon Adorn Gainesville City Streets

A judge on Friday sentenced the driver in a hit-and-run that killed a University of Florida student to six years in prison with 15 years of felony probation and took away his driver’s license for the next decade.