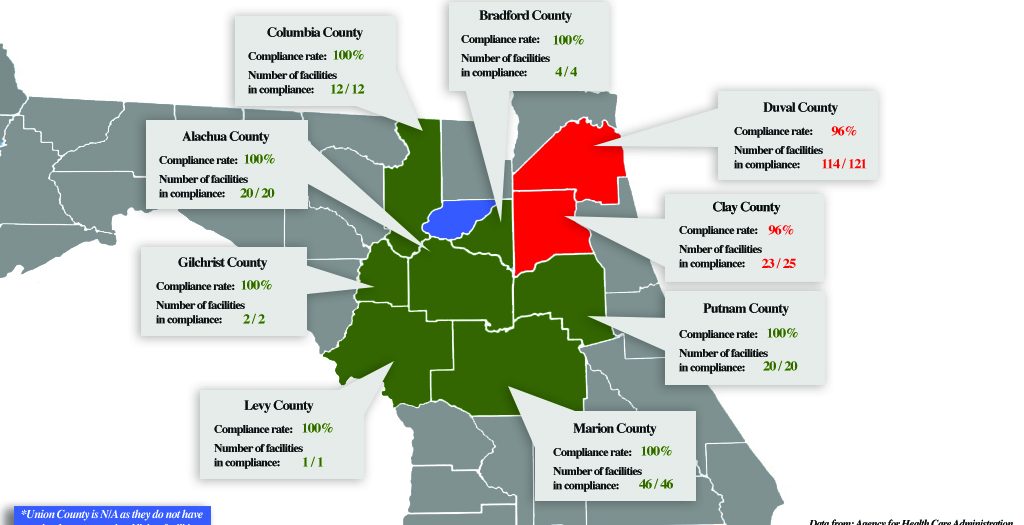 A map shows the compliance rate, according to a state agency, of regional nursing homes in each county within north central Florida. (Melissa Hernandez/WUFT News)

When Peggy Sue Munday searched for an assisted living facility for her brother, Jerry, 76, who suffers from diabetes and requires constant care, his safety was a top priority.

In 2016, Munday moved him into Ocala Oaks Rehabilitation Center in Ocala. The next year, 12 residents at a nursing home in Broward County died in the aftermath of Hurricane Irma.

Munday, 61, said her brother had power in his room at Ocala Oaks during the hurricane, and the facility also had an emergency backup plan.

“I was really nervous for him,” she said recently, “and he was very anxious about it, too. But thank goodness, nothing happened.”

In March 2018, then-Gov. Rick Scott signed a bill requiring all nursing homes and assisted living facilities to have alternative sources of power in the event of a natural disaster. The original deadline for compliance was Jan. 1, but some facilities are still requesting extra time. June 1 was the official start of hurricane season and the new deadline for facilities to implement their plans.

Most counties in north central Florida are compliant, including Levy, Gilchrist, Columbia, Union, Bradford and Putnam. According to the state Agency for Health Care Administration (ACHA), Alachua and Marion counties are both in 100 percent compliance.

Patrick Manderfield, deputy communications director for ACHA, said a facility is compliant if its plan is fully implemented, or it has requested or been granted a deadline extension based on valid delays. All such requests are considered on a case-by-case basis, Manderfield said.

Availability of proper equipment, installation scheduling and mechanical engineering plans reviews and approvals are some key reasons why facilities may require an extension, he said.

According to ACHA’s website, nursing homes and assisted living facilities may qualify for supply costs reimbursement and funding assistance through Medicare and the U.S. Department of Housing and Urban Development (HUD).

The new environmental control rule mandates that the plan a facility sends to a local emergency management department should include a timeline by which it would be fully implemented.

The new state law sets no limits regarding extension requests or their duration.

Attempts to retrieve information from officials at the Alachua County Emergency Management Department were unsuccessful. However, ACHA’s website states that all related facilities in the county have fully implemented emergency power plans.

“The coordinator before me did a great job of making sure we were compliant from the beginning,” Sullivan said. “She was ahead of it, actually.”

Other counties, however, have more work to do in order to become compliant.

Clay County is at 96 percent, but there is no timeline for reaching 100 percent, said Maria Haney, its emergency management planner. On April 10, according to state records, Governors Creek Health and Rehabilitation in Clay County filed a petition requesting more time beyond June 1. Heartland Healthcare Center – Orange Park is also seeking the same extension.

Manderfield added that facilities with approved extensions are still required to have “an adequate plan to protect patients during a power outage.” This includes a temporary generator on-site, a plan to obtain a generator within 24 hours of a power outage or a full evacuation plan.

In Levy County, Emergency Management director John MacDonald said some facilities have taken a different approach. Instead of purchasing generators, they borrow them, MacDonald said.

Other regions, including Bradford and Union counties, have fewer nursing homes and assisted living facilities, but more group homes, which follow different regulations.

Timothy Allen, emergency management director for Union County, said group homes must adhere to guidelines of both ACHA and the Agencies for Persons with Disabilities (APD).

Allen said that while the county approves all power and evacuation plans annually, it is up to facilities to ensure they are meeting the state’s criteria throughout the year.

“There’s no real guidance on the emergency management side,” Allen said, “but I think that’s for a reason, so we can have flexibility.”

North central Florida is one of only two regions in the state to achieve full compliance. Escambia, Santa Rosa, Okaloosa and Walton counties in the panhandle are also at 100 percent.

Counties with the lowest percentages are Bay and Highlands. They are both at 92 percent.

The overall compliance rate statewide is 98 percent. Out of 3,753 licensed facilities in Florida, 2,621 have fully implemented their emergency power plans and 1,070 have extensions.

As for Munday, she said she believes that the legislation was “surely needed.”

She and her husband, Ed Munday, live not too far from where her brother stays at Ocala Oaks. During Irma, they were without power in their home for six days. She wonders what could have happened to her brother if his facility had not had a back-up plan.

“I think sometimes we think when our family members are in a nursing home, everything is taken care of and everything is under control,” she said. “You don’t think about emergency situations like this.”

Melissa is a reporter for WUFT News who can be reached by emailing news@wuft.org or calling 352-392-6397.
Previous May 31, 2019: Afternoon News in 90
Next The Point, June 3, 2019: Most Area Nursing Homes Meet Florida’s Emergency Plan Requirements