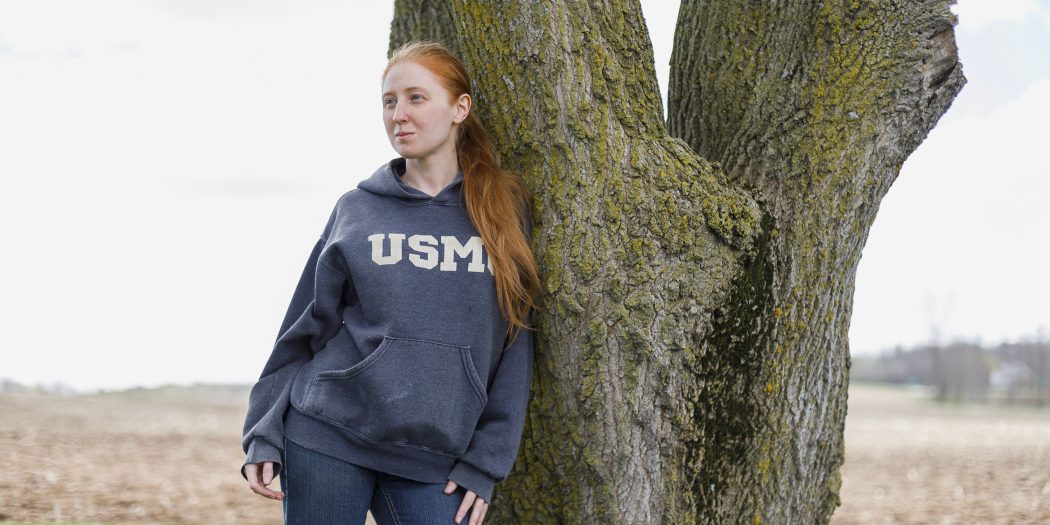 When Courtney Hering started working at Kohler Co. seven years ago, she was continuing a long family tradition.

“My mother, she’s been here 39 years,” she says. “My dad worked here for 14 years. And my grandfather on my dad’s side, he worked here as well.”

Best known for its bathtubs and kitchen fixtures, Kohler has been turning out solid products and solid jobs near the Sheboygan River in Wisconsin for nearly 150 years. Hering joined the company after a stint in the Marine Corps in North Carolina. She got a job in Kohler’s distribution center, moving finished faucets and unfinished brass. Her starting pay was about $11.50 an hour.

It was only after she’d been working there for a couple of years that Hering realized something startling: Many of her colleagues doing exactly the same work were paid nearly twice as much as she was. “It made me realize, ‘Oh man, this is a huge gap,’ ” Hering says.

That gap was a hangover from the Great Recession, when workers lost negotiating power and companies found a way to reduce wages. It’s also one of the pieces of the puzzle that help explain why wages stagnated for years, even as the economy came roaring back.

In 2010, Kohler adopted a two-tiered wage scale, and workers like Hering, who were hired after that, were stuck for years on a much lower track for both pay and benefits.

A lot of companies made similar moves during the recession — most notably the big U.S. automakers. With the economy in free-fall, workers didn’t have much power to resist.

George Cooper, a Kohler truck driver, remembers that period as a desperate time.

“They were shutting down plants like the buildings was on fire,” he says. “And then the housing market took a tank. There’s a lot of people that just went without jobs. And trust me, I was one of them.”

Still, Cooper says it was frustrating when he got a job with Kohler two years ago. The recession was long over, but the two-tiered contract had locked in lower wages. Cooper realized his pay and benefits were no match to those of other drivers doing the same work.

“It didn’t matter how long I was there. I was never going to reach that same peak plateau that they did,” he says.

Hering says the unequal wages caused friction in the distribution center, where newer, lower-paid workers grumbled at being asked to perform the same tasks for less money.

“Then you get your cliques because, ‘Oh, they’re Tier A and we’re Tier B and we shouldn’t do the same work,’ ” she recalled co-workers saying. “They would just tell you flat out, ‘Why should I do the same amount of work as that Tier A that’s been there 20 years?’ ”

That kind of division hurts morale and leads to poor-quality work. It can also splinter union solidarity. But in Kohler’s case, the two-tiered wage scale became a rallying cry, as veteran workers joined the fight to boost pay for their newer colleagues.

Tim Tayloe, who led that battle, started working for Kohler in the mid-1980s, forging molten metal into solid fixtures and a solid, middle-class lifestyle.

“I started … pouring iron in the foundry,” he says. “At that time, it was hard to get in at Kohler. It was the place to work. Good benefits, good money, good everything.”

When Tayloe was elected president of the local union five years ago, he was determined to restore good pay and benefits for new Kohler workers. For inspiration, he built a kind of shrine to past labor battles in the lobby of the union hall.

Tayloe points to a picket sign from 1954, when organized labor was at the peak of its power in the United States. “We just don’t want it to be forgotten. … They fought for our future,” he says.

In 2015, Kohler workers mounted their own strike. It lasted more than a month. When it was over, the two sides had narrowed the gap in the two-tiered wage scale, but they hadn’t closed it entirely.

Then last year, Kohler was back at the bargaining table, even though the labor contract with the union still had a year to run. The economy was humming, and Kohler was having trouble filling jobs. Workers were defecting to nearby companies such as Sargento cheese and Johnsonville sausage.

“Kohler had kind of put themselves in a situation where they weren’t being competitive,” says Ryan McCormack, a union shop steward.

In December, Kohler agreed to a new five-year contract that effectively phases out the two-tiered wage scale by 2023. And it gives new workers better benefits. Tayloe says he has seen the turnaround at union meetings.

“You see [younger workers] talking now. ‘Hey, I’m buying a car.’ ‘Hey, I’ve got a little extra money. I’m going to invest this a little for the future,’ ” Tayloe says.

What changed in the years since Kohler first imposed the two-tiered wage scale?

Unemployment in Sheboygan tumbled last year to around 2.5% — down from 9.3% in 2010. That put workers in a much stronger bargaining position.

“Nobody hands it to you,” Tayloe says. “You’ve got to negotiate for these wages and benefits.”

Kohler declined to comment for this story, but when the new contract was signed, CEO David Kohler said in a statement, “We are proud to be an employer of choice in Sheboygan County.”

Other companies are also phasing out two-tiered wages, including the big U.S. automakers. A Ford executive called unequal pay a distraction on the factory floor.

“We no longer talk about the differences between an ‘entry-level worker’ and a ‘legacy worker,’ ” Joe Hinrichs, Ford’s automotive president, told Automotive News in 2016. “All the workers are the same.”

But other companies are moving in the opposite direction. UPS adopted a contract that puts new drivers on a lower pay scale. And this winter, the new owner of a locomotive plant in Pennsylvania tried to cut pay for new workers by almost 40%. That’s now in mediation.

For now, more than 2,000 Kohler workers in Wisconsin are celebrating their new contract. Hering, who’s getting married next year, is planning a slightly more lavish wedding reception. And she says the mood has improved on the factory floor.

“You could tell there was a lot of happy people,” she says. “Production went up. People are wanting to stay for overtime because they know it’s worth their time now. So they’re able to go out and do more things. Or save up for something.”

Hering is thinking about buying a house someday. And after seven years at Kohler, she finally feels like she has found a professional home.

“I was told, ‘Don’t go in a factory, don’t go in a factory. You’re not going to have a life there.’ It feels like I do and I’m getting somewhere. So, I could see myself being here for my career. My family’s been in it for at least 40-plus years, so I’d like to kind of continue that tradition.”

National Public Radio is based in Washington D.C.
Previous America Is In Full Employment, So Why Aren’t We Celebrating?
Next With Workers Hard To Find, Immigration Crackdown Leaves Iowa Town In A Bind