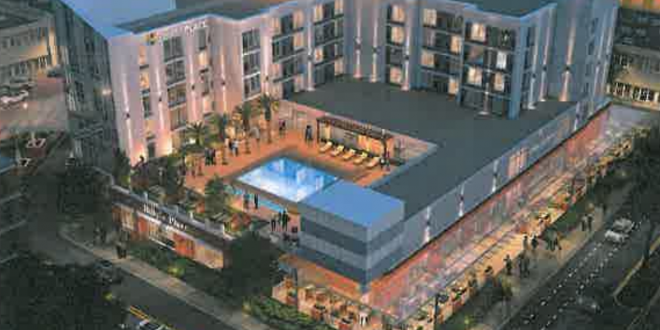 (Renderings courtesy of City of Gainesville)

The decision has been put off for almost a decade after the lot’s first project, Gainesville Green, collapsed due to the 2008 economic crisis.

“I remember that Lot 10 was on the agenda my first commission meeting,” said City Commissioner David Arreola, who was elected in 2017.

Under this contract, the City of Gainesville will sell Lot 10 for $2.34 million, a price based upon the latest market appraisal.

The lot will be turned into a full service, six-story hotel, complete with 120-140 rooms, two restaurants and a meeting space. This will create more tax revenue for the City of Gainesville and provide jobs. 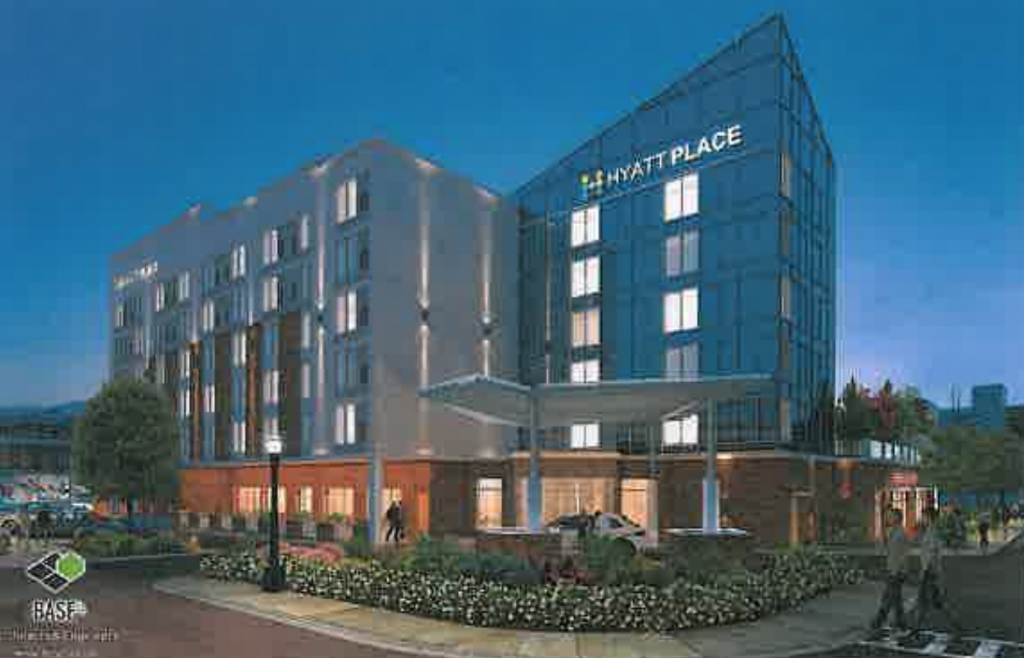 The hotel would be built on a little less than an acre and is located in front of Loosey’s Downtown Gainesville, on the corner of Southwest First Avenue and Southwest Second Street.

There will be a 120-day due diligence period to complete the contract, with the developers placing a $50,000 refundable deposit in case the project falls through.

The city will provide environmental security as well as 40 percent of the funds into an escrow account, a type of temporary savings for future use, for potential remediation of pre-existing environmental conditions. Groundwater contamination was the main environmental issue previously found at this lot.

Erik Bredfeldt, the city’s economic development director, presented the contract to the board and went over all of its financial and developmental aspects.

“I think we will know if there is a problem by Oct. 4,” Bredfeldt said.

Commissioner Arreola opposed approving the contract based on how 40% of funds may be going into an escrow account, which equates to a little less than $1 million. He believed that this would be too much of a risk.

“I hope it’s not a deal breaker, but I simply cannot support putting almost $1 million aside,” Arreola said.

The City Commission hopes to sell the lot to two local private developers, EDA Engineers-Surveyors-Planners, Inc. and 1+1=3 of Gainesville, LLC. Negotiations started in January 2018 with these two groups to buy the land.

“I just like the story of a Gainesvillian wanting to do something good for their community and make an economic impact in their community, but I think [Arreola] has a valid point,” said City Commissioner Gigi Simmons, who also opposed the contract.

The hotel will be made by local developers, have local restaurants, local owners and it will host small businesses.

Commissioner Harvey Ward argued for the contract after hearing Commissioner Arreola’s point regarding the funding. Ward said even after putting almost $1 million aside, the leftover amount will still be higher than the second-best offer. The impact on the community, being the increase in jobs, as well as the increased tax revenue, would make up for the money put aside.

“There is also a point at which being done is better than a pot of gold at the end of the rainbow,” Ward said. “I would really hate putting this off until the next economic dip.”

“By not approving this and not moving it forward, we will lose by far more tax dollars than approving it and moving forward,” Poe said.

The contract would become effective on May 31, and the deal for buying the property would need to close no later than January 31, 2020.

Everitt is a reporter for WUFT News who can be reached by emailing news@wuft.org or calling 352-392-6397.
Previous Texting While Driving Bill Goes To DeSantis
Next The Point, May 17, 2019: Canine Distemper Virus Spurs Quarantine At Alachua County Animal Shelter