Rolled Up Sleeves: Is Tattoo Bias in the Workforce Rising Or Falling?

Kevin Baron used to joke about what he had to do to get his neck tattoo.

“I had to shiv three people in the showers in prison,” Baron, a political science lecturer at the University of Florida, said with a laugh. “I’ve never been to jail for the record.”

Baron’s quip speaks to an anxiety a lot of Americans experience: tattoo bias. Stereotypes linger from the countercultures that early-adopted tattooing.

“Growing up in the ‘80s and early ‘90s in Southern California, you know, there was sort of the rise in a lot of, kind of, gangster culture,” Baron added. “When I was 21, I got my first forearm tattoo and was at work,” he said, recalling the time he wore a short sleeve T-shirt and his boss pulled him aside. “(He) sits me down and begins to tell me that only criminals and sailors get visible tattoos and that I’m ruining my life and throwing away everything.”

“Now, this was the guy who paid me minimum wage and had me work six days a week.”

“This was the late ‘90s,” Baron said. “Like, that was a very dominate perspective.”

Tattoo artists like Mike Salay, the owner of downtown Gainesville’s Anthem Tattoo, are familiar with the stereotypes.

“Just because you’re getting a tattoo, it’s not going to make you forget how to do math or spell your name or something like that,” Salay said. “It’s not like the ink is going straight to your brain and get you all effed up.”

Results from The Harris Poll between 2008 and 2016 demonstrate a drop in the perception that people with tattoos are rebellious. In fact, over the past 15 years, tattoos have become mainstream. Data from Statista shows that only 16% of Americans self-reported having tattoos in 2003. That figure rose to 42% of those surveyed by 2017.

“It’s big,” Salay said about the tattoo business. “Everybody and their mother is coming in.”

“A lot of it has to do with pop culture, because you see it more,” Veneziano said. “More people have visible tattoos, so everyone is being more okay with it.”

“My daughter and I love watching a lot of the Food Network shows and you see all the chefs are in sleeves. You know, they have that sort of rock star persona about them. And so, you know, you see it far more often.”

“The artwork is different now,” Veneziano said. “It’s like the way you use to think was all skulls and things like that. But now, you can get almost anything tattooed on you.”

Until recently, there was a real fear that tattoos would be received negatively at the workplace. Legal protections against workplace discrimination have yet to be enacted, and companies are not required to update hiring policies. Employers may disqualify job applicants with visible tattoos that they deem violent or vulgar.

Workers may be required to cover their visible ink. Salay said he remembered a trip to Disney World a few years back when it was 90 degrees and he noticed an employee wearing a long, black sleeve in an attempt to cover up her tats.

When he asked to see her tattoos, she said she could get in trouble.

“I was like, ‘I’m not going to tell anybody,’” he recalled. “She had a full arm sleeve and I’m like, that’s terrible. You could tell that she was uncomfortable.”

“I think there’s still some of those perceptions out there,” Baron said. “I think you still see, especially in a lot of industries, there would be hesitation to hire somebody if they had a lot of visible tattoos.”

Despite Baron’s familiarity with this bias, he never experienced discrimination for his visible tattoos.

“I would say that socially for me as a white dude, I get away with more than women would, that people of color would,” Baron continued. “It’s not just tattoos themselves but also who is wearing them, and that can be gender or race-based, for sure when it comes to some of the stigma that’s there.”

A 2018 survey from Salary.com reported that 76% of participants felt tattoos negatively impacted their chance of being hired.

“Mostly in the corporate fields, medical,” Veneziano stated. “Anything like that definitely will give you trouble if your trying to get employed there. They’re going to take you below someone who doesn’t have tattoos visible.”

The same survey, however, reported only 4% experienced actual instances of discrimination.

“That’s actually really good to see,” Baron said. “So clearly there still is a sense of stigma even though 4% is pretty small.”

Highly visible tattoos break with the logic of traditional placement.

“Years ago, you never wanted to be tattooed below the elbow or below the knee because if you were in shorts and a t-shirt, you could cover everything,” Baron explained. “And now it’s almost like people are getting tattooed in all the places opposite of that.”

One demographic led the embrace of visible tattoos.

“Millennials,” said Salay. “I would say that they’re the ones getting more of the visible tattoos than the nonvisible tattoos,” Salay confirmed.

“We see that with a lot of social issues,” Baron said. “When you begin to have personal interactions with it, and that may not be yourself but family members or people you’re close to, suddenly you see getting tattooed. And you kind of realize it’s not really, like, that big of a deal.”

“So my old boss’ things about criminals and sailors doesn’t really hold anymore,” Baron added. “We’re blaming Millennials for ruining everything now, so maybe can we offer them some credit [here].”

Matthew is a reporter for WUFT News who can be reached by calling 352-392-6397 or emailing news@wuft.org.
Previous The Point, May 16, 2019: When Florida’s 2019 Hurricane Sales Tax Holidays Will Take Place
Next Texting While Driving Bill Goes To DeSantis 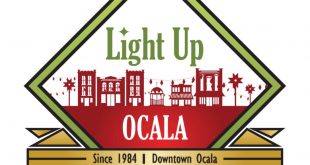 Light Up Ocala Rescheduled For November 2021 Due To Pandemic

Due to the pandemic, the Ocala City Council has agreed to reschedule the annual Light Up Ocala event for November 2021.