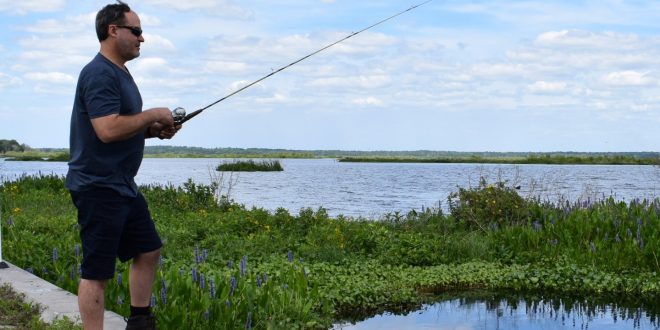 Charles Clarke fishes on the side of the prairie at least once a week and said he has yet to get in trouble by law enforcement over it. (Blake Trauschke/WUFT News)

Charles Clarke grabbed his fishing rod and a bucket from his car, parked on the side of U.S. Route 441, and walked to the edge of the flooded waters of Paynes Prairie Preserve State Park.

Cars whizzing past at 65 miles per hour, Clarke cast his line into the water about 20 feet from U.S. Route 441.

Clarke was not the only one fishing on the east side of U.S. Route 441. A dozen other cars were parked intermittently along the almost two-mile stretch that goes through the state park.

Since Hurricane Irma in 2017, the water levels at Paynes Prairie have been significantly higher than normal, making U.S. Route 441 a waterfront road popular with anglers.

Signs that read “No Parking On Right Of Way”, which FDOT placed a couple of months ago, dot the east side, Roberts said.

Roberts said people are not allowed to park on the right of way, but FDOT doesn’t mind if cars are parked at the Ecopassage Observation Boardwalk, located in the middle of the east side of the two-mile stretch.

“There are no ‘No Fishing’ signs,” said Roberts. “As long as there are no safety hazards or damage along the roadway, this is fine.”

Karen Parker, spokeswoman for Florida Fish and Wildlife Conservation Commission, said if you are older than 16 and younger than 65, all you need in order to fish at Paynes Prairie is a Florida freshwater fishing license. Head on to soutdoors’s website for best spinning reel reviews . Fishing without a license can result in a $50 fine plus the cost of the license.

Donald Forgione, park manager at Paynes Prairie Preserve State Park, said fishing is encouraged in the prairie, but the park doesn’t own the roadsides where people are fishing.

“They’re fishing in a DOT canal,” Forgione said. “You’re allowed to fish in the prairie, but the water is so high you cannot tell the difference.”

Forgione said the fish came from Alachua Lake in the middle of the prairie. When the water levels rose, the fish swam into the FDOT canal.

Anglers are welcome to park inside the state park and fish, but Forgione has not noticed any increase in fishing in the state park since the flooding.

At an Alachua County Commission meeting on April 9, Capt. William Tierney, a district commander for the Florida Highway Patrol, said there is a heavier concentration of accidents along this two-mile stretch through the prairie, but he didn’t know if the increase in accidents is because of the anglers and their parked cars.

“We could do a study out there to see how many people are fishing and determine if they are posing a hazard, which they could be,” said Tierney, whose district covers Alachua, Dixie, Gilchrist, Levy and Lafayette.

Without the “No Fishing” signs, Tierney said, there is nothing law enforcement can do.

“As of right now, we can’t do much of anything unless we see it to be a situation that could cause a problem,” Tierney said.

Clarke fishes on the side of U.S. Route 441 because he has to drive through this area for work at least once a week.

“In here, there’s bass, brim, specks and mudfish, but those are not good to eat,” Clarke said. “I usually catch one or two, but I’ve caught as many as five fish.”

Blake is a student reporter for WUFT and can be reached by calling 352-392-6397 or emailing news@wuft.org.
@BlakeTrauschke
Previous The Point, May 14, 2019: Florida’s Governor Is Currently Considering A Major Toll Road Expansion
Next DeSantis: Russians Hacked Two Florida Counties In 2016