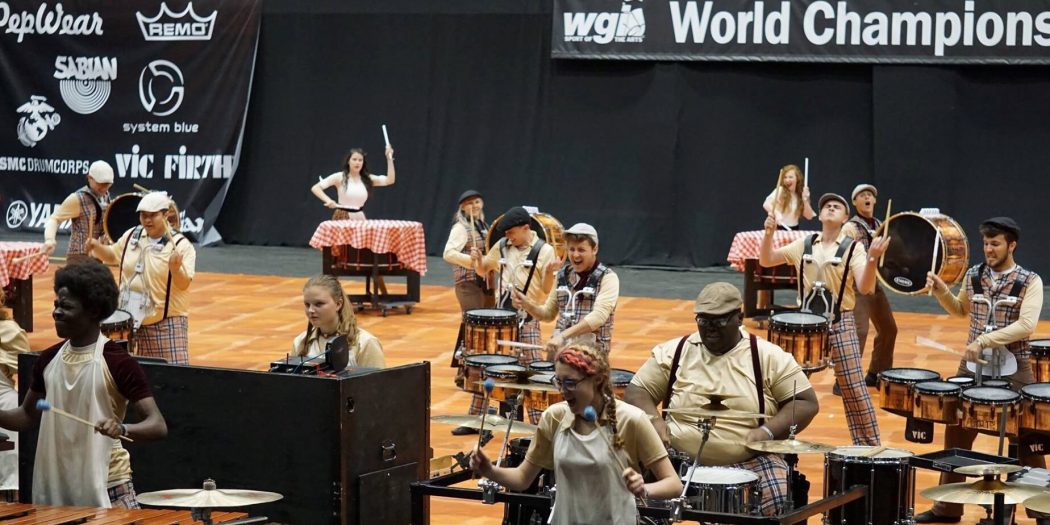 To some, the idea of performers and percussionists dancing around bass drums covered in checkered tablecloths and throwing pizza in the air might seem absurd.

However, to Jeremy Lee and Unity Percussion, the idea was a ticket to the winner’s podium. On April 13, the indoor percussion group, made up of young adult performers from north central Florida, won first place at the annual Winter Guard International Worlds Competition.

Unity Percussion’s performance, “Scenes From An Italian Restaurant,” received a 96.15 out of 100 points, the highest score in the percussion division since it was included in A Class, the division Unity Percussion competes in, 19 years ago. The group traveled to Dayton, Ohio, for the six-minute performance.

Inspired by a pizza-tossing competition a group member saw on TV, the performance featured a full-sized bar, an orange “brick” floor, and a rousing rendition of Dean Martin’s “That’s Amoré.” Unity Percussion director Lee suspects that the ingenuity of the performance made them an “undeniable” contender for first place.

Some may be unfamiliar with indoor percussion, but Lee said the intricate, theatrical performances are unique to halftime shows and high school marching bands.

“Indoor percussion is nothing like anyone has seen before,” Lee said.

Every performance includes a drum line, theatrical performers and percussionists playing instruments like marimbas and xylophones. Of the 78 individuals who auditioned for Unity Percussion, only 34 received offers for the elite team.

Unity’s visual director, Arjuna Myles, said indoor percussion is best described as the excitement of drum line combined with the storytelling of theater.

In addition to directing Unity, Lee is also the percussion director for the Santa Fe High School’s Raider Regiment. Though Unity membership dues this season were $1,500, Lee and other staff members receive no compensation for their time — only reimbursement for gas.

Notably, this year’s performance group was the youngest in Unity’s history, with one 8th-grader and most members between the ages of 16 and 18. Members are eligible as long as they are below the age of 22 by April 1 of the competition year.

Section leader and marimba player Jahirah Williams, a Santa Fe College student, said balancing the heavy practice schedule with schoolwork and his social life is always a factor, but the group focuses on practicing and performing their best.

Unity members rehearsed or competed every weekend from December to April, putting in more than 20 hours each weekend.

Williams said he believes Unity’s performance stood out because of its lighthearted nature. Many successful WGI performances are about topics such as abuse or fear, not pizza.

Instead of focusing on winning, the group focuses on putting on a performance everyone can be proud of, Myles said.

“The final performance this year was ecstatic and executed beyond even our expectation,” Myles said. “The members were incredibly happy, coming off the floor with tears of joy, knowing they did their absolute best, and that is what it’s all about.”

As they celebrate their latest win, Unity is already looking forward to what’s next. Talks of moving from A Class competition, for beginning performance groups, to Open Class, for intermediate, have consumed the group. Williams said he’s already daydreaming about this increase in competitiveness.

“I’m really proud of Unity and what we’ve accomplished so far,” Williams said. “I’m really excited for Unity in the future. Grazie!”

Camille is a reporter for WUFT News who can be reached by calling 352-392-6397 or emailing news@wuft.org.
Previous Interview: UF President Kent Fuchs Discusses End Of 2018-19 Academic Year
Next A Year Later: No Progress Or Visible Changes From Newnans Lake Improvement Initiative