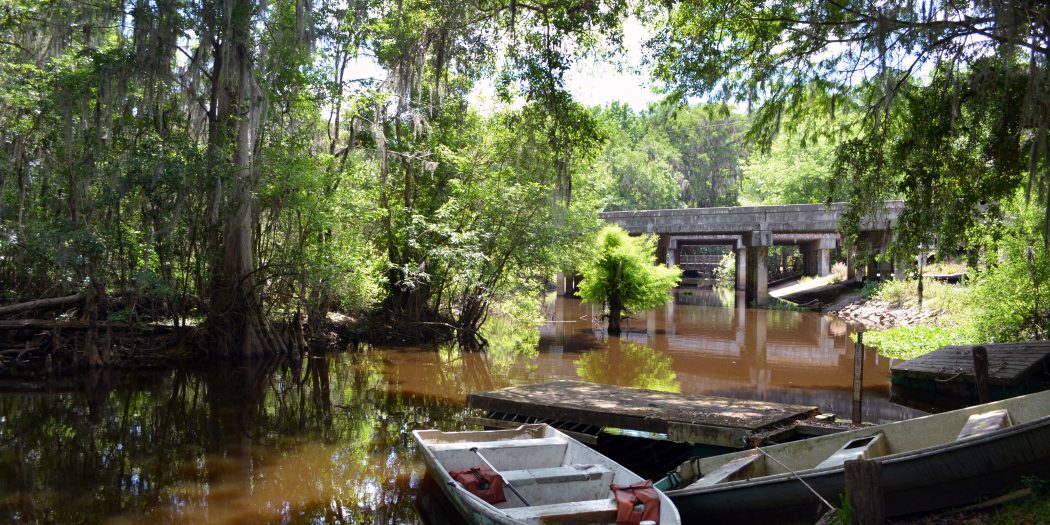 The water in Newnans Lake resembles a coffee color due to an excess of phosphates and nitrates in the water. (Kristen Altus/WUFT News)

A Year Later: No Progress Or Visible Changes From Newnans Lake Improvement Initiative

Water quality in Newnans Lake, one of Alachua County’s largest bodies of fresh water, hasn’t improved much since the county began the second phase of its Newnans Lake Improvement Initiative a year ago March.

Take a kayak ride out of Kate’s Fish Camp, a boat rental and dock on the south creek of the lake, and the surrounding water resembles a cloudy brown, with no visibility beyond the surface.

“The lake needs help, it really does,” said Mike Carter, the owner of Kate’s Fish Camp. “When you can’t quantify your actions into results, you need to stop and just regroup.”

Newnans’ murky color is caused by nutrient pollution, which creates an excess of phosphate and nitrogen deposits from stormwater runoff, according to the Alachua County Environmental Protection Department.

Project documents show the county’s $456,000 budget went toward investigating the source of the pollution and the construction of a weir across Little Hatchet Creek, which is located just north of Newnans.

Weirs act as barriers for water flow, filtering out pollutants and recording how much water is flowing through.

Although the construction of the weir that was supposed to begin in March 2018 was meant to reduce daily nitrogen and phosphorus intake by 74 and 59%, respectively, the county said the weir has yet to be built.

Shane Williams, a stormwater engineer for the project, said construction was delayed because the county received funding for a second weir, and the Army Corps of Engineers must approve the building permits.

“We’re looking at this as a pile-up project, and we’re hoping to see a reduction in daily loads,” Williams said. “And if we do, then we can replicate this in other areas in the watershed.”

Carter and his wife, Monica Carter, have been on the lake for its lowest lows and highest highs.

They’ve lived in the apartment behind the camp for over 20 years.

Kate’s Fish Camp was flooded for two weeks during the El Niño of 1998. During the drought of 2012, when the lake dried out, Mike Carter found artifacts buried along the bottom: arrowheads, decorated pottery pieces, a metal boat and construction tools.

“In those artifacts, you can definitely see that the Spanish came, and they had business to take care of,” Monica Carter said.

On particularly rainy or windy days, the Carters said, the water will turn gray. Once when Mike Carter left a cereal bowl under the water and came back an hour later, it was full of sediment.

Mike Carter, who is also the camp’s land proprietor, cross-examined the lake’s sediment layers with a long PVC pipe. He found that the bottom-most layer of the lake is clay, the middle is a hard, dormant sediment and the top layer an “organic muck” sediment.

The organic sediment has started to accumulate in the lake’s shallow waters. Mike Carter said that because of the sediment, when fish try to get into their “beds,” they kick up clouds of muck.

This has resulted in less fish life since the sediment easily disturbs fish habitats.

When he brought his findings to the county’s environmental department, they weren’t interested in discussing the sediment content, Mike Carter said.

“Rather than dealing with the lake, they put pressure on the businesses around the lake to ‘straighten up their act’ and pollute less,” Mike Carter said.

Mike Carter believes that in order for the lake to be clear and swimmable again, the sediment should be dredged down to its clay base.

Williams agreed that dredging would be an effective way to help Newnans’ water quality.

“Dredging is expensive, but he’s right,” Williams said. “It does work when you have accumulated muck like that.”

However, Williams said dredging is not an option in Newnans because it would destroy the archaeological resources in the bottom.

The Carters said although fewer and fewer people have been coming to fish and kayak over the past decade, they’re happier than ever.

“We’ve been blessed, but I hope they clean up the lake,” Monica Carter said. “This was a healing lake, a vortex in time.”

Moving forward, the county predicts all permits will be approved by early summer and construction will start in October and be completed by Christmas, according to Williams.

“This project addresses one source of nutrients, but there are other sources that would require other types of projects necessary to deal with the lake’s water quality,” Williams said. “Dealing with the internal cycle of nutrients is something that’s going to have to be done. We’re in the early stages of that.”

But the Carters remain skeptical of the county’s efforts.

“You never see results,” Mike Carter said. “This could be a crystal clear lake; this could be Gainesville’s beach. This is the richness and the heritage for this area.”

Kristen is a web editor and reporter for WUFT News. She can be reached by calling 352-392-6397 or emailing kaltus@ufl.edu. Follow her on social media @kristenaltus.
Previous First Place Tastes Like Pizza
Next United Methodist General Counsel’s Vote On Sexuality Can’t Shake The Faith