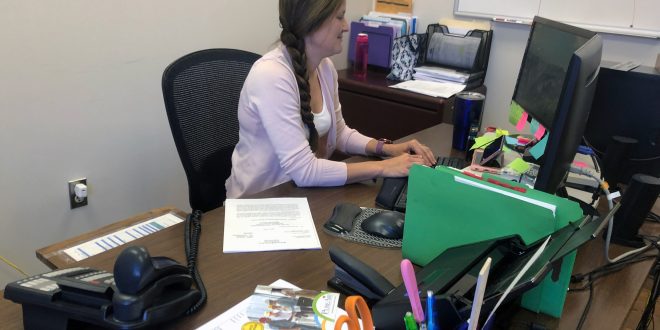 Alicia Tretheway, Levy County procurement coordinator, said the county will outsource for the remediation of all the county documents rather than having current employees take on the task due to the risk of potentially making an error and not meeting all ADA standards. (Rachel Spencer/WUFT News)

Levy County will soon adjust its website and online documents to comply with the federal Americans with Disabilities Act’s standards for visually impaired website visitors.

At an April meeting, the county decided to move forward with the bid process for selecting an individual or firm to remediate county documents to comply with ADA standards. Levy County procurement coordinator Alicia Tretheway said she estimates the county will pay more than $37,000 to ensure the county’s 13,177 PDF documents meet ADA standards.

Tretheway said the documents will be fully accessible for visually impaired computer users using a screen reader, which is a program that translates and reads on-screen information out loud.

The remediated documents will include those created from 2015 to present and include anything that goes before the board.

“The agendas we have, all of the supporting documentation, any financial information like budgets and any forms — all will need to be posted and readable,” Tretheway said.

Melanie Etters, communications director for the Agency for Persons with Disabilities, said this push for present and future ADA compliance in the county is critical for accessibility to those with visual impairments.

“Individuals with disabilities should have access to all the information that is on a website,” Etters said. “All government entities have a responsibility to comply with accessibility requirements, ensuring information can be viewed and read by all members of a community.”

This remediation process is done by hand, with someone doing technical work to convert a normal file into a resource that is more visually accessible.

With the number of documents needing to be made accessible, this will be a long and tedious process, Tretheway said.

Tretheway said all county documents have currently been removed from the county’s site until the remediated documents can be uploaded.

Additionally, the county website will have to be audited to identify whether it complies with ADA standards for the visually impaired. The audit will cost the county about $8,000.

“We have to make sure all the pictures have alt tags, that a person can tab through instead of using a mouse, that the colors are in the correct contrast – stuff like that,” Tretheway said.

The ability to tab through the website allows people to move from item to item using a key on the keyboard rather than a mouse.

Tretheway said the website audit is not a one-time process.

“The auditing will continue probably for about a year or so – or longer,” she said. “We may just continue with the auditing because things can change. When we have to upload stuff, the website is going to change, and we want to make sure the website is ADA accessible.”

Levy County has been working on a website revamp since 2018, adjusting the site to make it more user-friendly and accessible on mobile phones. However, ADA-related issues with websites are the most recent development and now the county’s central focus.

Levy isn’t the only county running into these problems, as various municipalities also have encountered similar issues regarding ADA compliance of their websites and accompanying documents.

Volusia, Flagler, Nassau and St. Johns Counties are among the many Florida municipalities and counties that have been sued for failing to meet ADA standards.

Barbara Petersen, president of the Florida First Amendment Foundation, said the lack of compliance within these counties is a cause for concern.

“A lot of government agencies are making what they can more accessible,” Petersen said. “If they can’t easily make the documents accessible, they are just taking them down from the website.”

Petersen said this creates a tension in that government should be efficient and transparent for all citizens.

Levy County has not yet begun the processes of converting county documents or auditing the website.

Tretheway said the county is tentatively contracted to begin the process of auditing its web pages through ADA Site Compliance. The county is currently waiting on the official contracts to be signed to start this process.

As for the remediation of the documents, the county is assembling a request for proposals to search for a company that will carry out not only the initial remediation services for the 13,177 documents but also for any future documents.

“Moving forward, this will be a standard procedure,” Tretheway said.

Rachel Spencer is a digital reporter for WUFT news.
Previous Alachua County Will Have Bilingual Ballots And Poll Workers At 2020 Elections
Next The Point, April 29, 2019: Fracking Ban Likely To Fail In Florida Legislature During Last Week Of 2019 Session