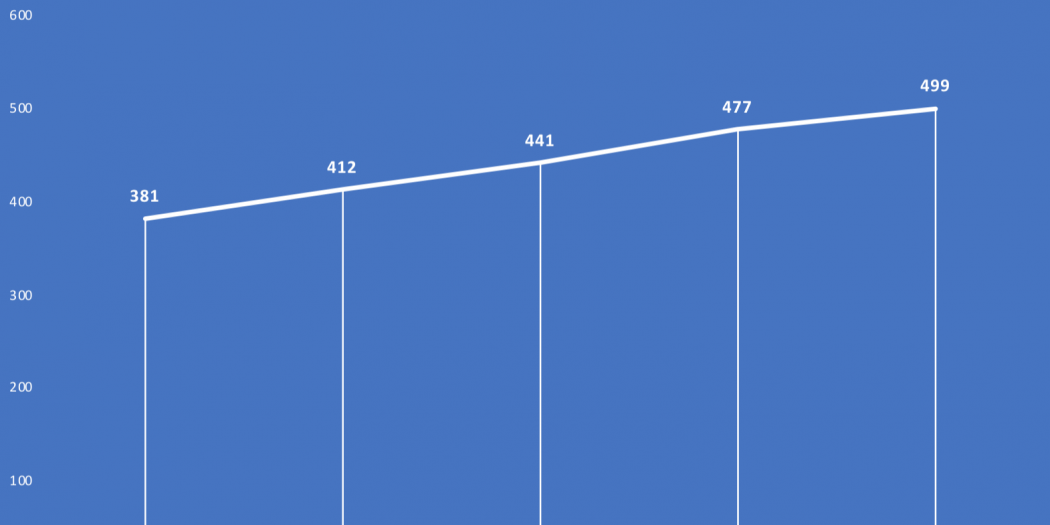 A chart of Florida Department of Health data shows a steady increase in the number of dog bites in Alachua County over the past five years. (Haley Sparks/WUFT News)

One less than 500 dog bites were recorded last year in Alachua County. That’s about the same as in Casper, Wyoming, which also had a dog bite a person or animal an average of 1.3 times a day.

Casper has 58,000 people living in its city, according to U.S. census estimates, while Alachua County has 267,000 residents.

But some residents and veterinarians in Alachua County say the local measure doesn’t go far enough. They believe that owners of dogs deemed dangerous should not only lose their pets, but also be held financially responsible for damages suffered by those attacked.

“I believe everyone’s hearts are in the right place, but I am concerned the ordinance will not address all of the issues,” said Jennifer Kesler, chief of staff at Oaks Veterinary Hospital in Gainesville.

On April 9, the county commissioners adopted an irresponsible pet owner ordinance that in many ways mirrors the one passed in Casper.

The Alachua County ordinance states that an owner would earn a minor violation for having a pet that creates a public nuisance, is unleashed or untethered, or isn’t vaccinated against rabies. Major violations include dog attacks and having a dog classified as dangerous. A person with more than two minor violations or more than one that’s major would be labeled irresponsible.

An irresponsible pet owner would need to sterilize and microchip all their pets within 30 days. Those labeled as such would be unable to obtain any more animals for three years.

Under the Casper ordinance, a person would be declared a reckless pet owner if they commit three or more smaller offenses, such as allowing a pet to run at large, during an 18-month period – or if their animals are involved in two or more serious offenses, like biting and attacking, in a three-year period, according to the Casper Star-Tribune.

Casper City Councilman Chris Walsh said that the ordinance there has made a difference.

“It brought a lot of attention to people making sure they properly restrain their animals while walking them,” Walsh said.

Debbie Martinez, a retired registered nurse, of Gainesville, is among those who feels the county’s ordinance needs to put more financial responsibility onto the owners of dangerous dogs.

Dog attacks result in a costly recovery for the owners of the damaged animals, Kesler and Martinez said. Emergency stabilization after hours, multiple surgeries, diagnostic care and wound care are all procedures that the dog may need after an attack, Kesler said.

“It is easy for the vet to run into thousands of dollars for the animal’s recovery,” Kesler said.

Terri Curtis, a veterinary behaviorist at the University of Florida, agrees with putting responsibility for any pet’s behavior into the hands of its owner.

Kesler said urged owners of potentially dangerous dogs to get professional help, even if it is something as simple as the dog begins to stop listening to commands.

“You might need help,” Kesler said. “Everyone is not a professional dog trainer.”

Haley is a reporter for WUFT News who can be reached by emailing news@wuft.org or calling 352-392-6397.
Previous Marion County Sheriff’s Office Contract For Additional Traffic Enforcement
Next The Point, April 25, 2019: Andrew Gillum Pays Fine To Settle State Ethics Case From His Time As Tallahassee Mayor

Two men with ties to the University of Florida and who have been recent subjects of separate sexual assault investigations were arrested after Gainesville Police Department officers determined there was probable cause to recommend charges.