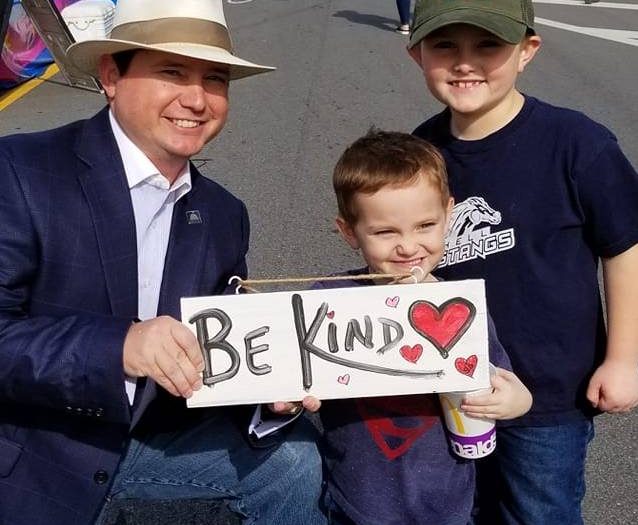 Mayor Surrency and two of his three sons at a community event, reminding people to be kind to each other. (Photo courtesy of Matt Surrency)

Joining The Family Business: How The Mayor Of Hawthorne Came To Be

Barbara Graham lives in Fort Walton Beach, Florida, but her brother lives in Hawthorne along with many of her friends. After hearing about everything the mayor of Hawthorne has done, she has been thinking about moving there.

“Every town should have a Matt Surrency as their mayor,” Graham said. “He’s the weatherman, he’s the sportscaster; he’s there for everyone.”

Surrency never thought he would be mayor. He just wanted to be a baseball coach. After watching his mother and grandmother take part in local government, he wanted nothing to do with it.

But after enough people asked him to run, he finally gave in. Six terms later, he’s still doing the job.

“It’s been a fun ride,” Surrency said, placing his signature white panama hat on the wooden table inside City Hall. His middle son has the same hat, and people often refer to him as “Little Matt.”

“I try and still make sure that even though I’m the mayor that I have no more importance than the other commissioners. We all have one vote.”

Surrency became a city commissioner in 2009 and moved on to mayor in 2011. He has remained mayor ever since. Now he’s considering trying to make the move to state government.

As a child, Surrency watched his mother and grandmother take part in local government. In the 1980s, his mother, Sharon Surrency, became the first female elected mayor, a position she held until the mid-1990s, when she moved out of the city limits. During the same time, his grandmother became a city commissioner.

In 2002, his grandmother lost the commission election by one vote, he said. After that, community members started asking him if he had plans to get in on what seemed to be the family business.

At the time, Surrency said, government service didn’t interest him.

“I had no passion for politics. At that point, I was just coaching baseball,” he said. “I finally decided to give it a shot when my wife got a late water bill, and that was kind of like the straw that broke the camel’s back.”

During his time as a student at Hawthorne Middle/High School, Surrency developed a love for helping the community. As a natural leader, he took part in several leadership clubs with others who grew up to enter government.

“It started in high school when I was in Outlet Teen Council,” he said, “which is interesting because it was me, Andrew Gillum, Chris Chestnut, Cedderick Daniels.”

Gillum became mayor of Tallahassee and ran for governor. Chris Chestnut became a prominent lawyer in Gainesville. Cedderick Daniels worked at Gainesville High as a defensive assistant coach for the football team and is now the head coach at Eastside High School.

When they were all in high school, Surrency and the others would plan activities for local high schools to help keep their fellow students out of trouble.

“I look at it as a service to the community rather than a job, and I’ve been doing that my whole life,” Surrency said.

Last year, Surrency had everything he needed to run for state senate against current senator Keith Perry. At the same time, however, the city learned that their middle/high school might be shut down due to poor grades.

“I made the tough call, and you know, sometimes I still second-guess myself,” he said. “I think I could have done great in the senate, but it would have been worthless to me if I moved to the senate and Hawthorne closed.”

At this point, moving to state senate isn’t completely off the table, he said. But until the people in his city let him know he has done enough, he said he’s happy sticking around.

“I’m no different than anyone else. I’m just currently serving as mayor, but I just try to let everyone know that they’re just as important as me.”

“He cares so much, and as long as I’ve known him, he’s always been a leader,” she said.

During hurricane season, Lovell recalled, Surrency went beyond Hawthorne’s city limits to help everyone he could. All night he was helping to remove fallen trees, making sure people were safe and continuously updating Facebook to keep everyone in the loop, she said.

“It’s like he’s supposed to be mayor. He just cares about this city so much,” Lovell said.

Josephine is a reporter for WUFT News who can be reached by calling 352-392-6397 or emailing news@wuft.org.
Previous CRA Hopes Heartwood Will Be ‘Catalyst For More Investment’ In East Gainesville
Next Potions And Profits: Modern Witches Making A Living In Gainesville