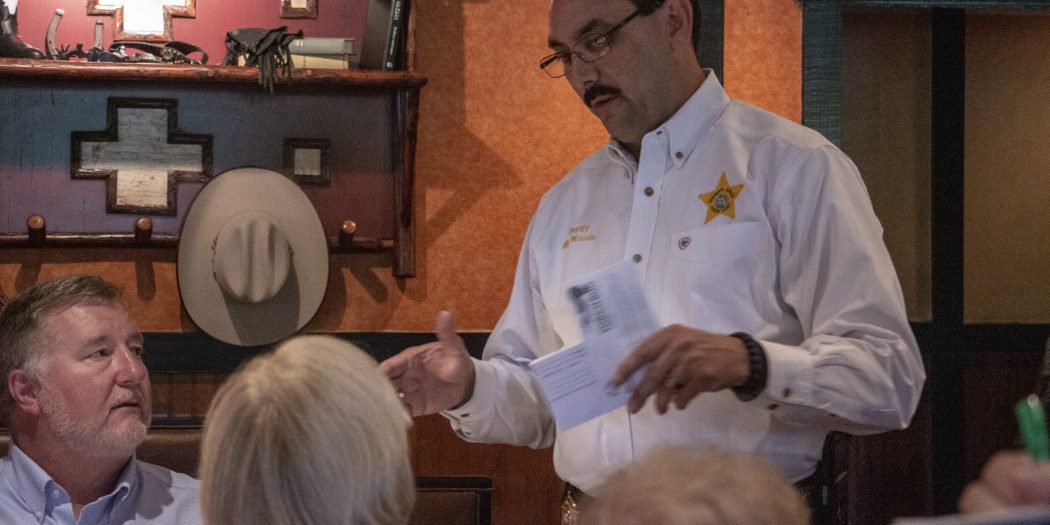 More than 20 members of law enforcement filled the Longhorn Steakhouse in Ocala, but they weren’t there on a 911 call.

The staff of the Marion County Sheriff’s Office spent Thursday evening as guest wait staff to raise money and awareness for the Special Olympics during their Tip-A-Cop event. The deputies shadowed and assisted the 11 Longhorn servers who were already on the floor.

Sheriff Billy Woods enjoyed seeing his staff interact with the community in a positive way.

“A lot of time people’s interaction with law enforcement is when we put handcuffs on them or when we stop them for a traffic stop,” Woods said. “The truth is that without our community we would be nothing. We want our community to be safe and we want to help every person that we can.”

For that night in particular, Special Olympics athletes like Zachary Deonath were the ones receiving help.

Deonath, 23, competes in paddle boarding and cycling competitions. For families like his, competition and travel costs can add up quickly. It is that reality that motivates Woods and others to fundraise.

“It’s all for our athletes. Raising money for them allows them and their families to participate in regionals, states, nationals and the world games,” Woods said.

Athletes from Central Florida sometimes go on to the World Games. Most recently Renee Phifer, a student at Santa Fe College and equestrian athlete, won three gold medals at the 2019 World Games in Dubai in April.

Stories like Phifer’s continue to inspire Sergeant Juan Ocasio, who has volunteered with the Special Olympics for decades.

Since childhood, Ocasio has gotten to know people with intellectual disabilities, beginning with his cousin. Even though his cousin never participated in the Special Olympics, Ocasio says she and childhood friends like her have helped inspire him to continue to support this cause through the decades.

“For every dollar that is donated, 83 cents of it goes to the athletes and their families,” Ocasio said. “I think it’s one of the best organizations there is.”

For some volunteers like Master Corporal Daryle Greene the event reminded them of a different time in their lives.

As a school resource officer at Forest High School, Greene gets to see the way the Special Olympics impacts the community at an even more local level.

“I know over at Forest High School we just had our countywide Special Olympics, and I loved seeing our kids participate,” Greene said. “I know how important it is for our adult athletes to participate also.”

The uniformed deputies circled around the steakhouse gathering envelopes from customers at their tables.

Tricia Glassco, a Longhorn server, was impressed with the response.

“I think everyone that I have served has tipped and they seem to be very encouraging about it,” Glassco said.

Woods believes that the community should be encouraging toward local athletes for more reasons than one.

Shelbie is a reporter for WUFT News who can be reached by emailing news@wuft.org or calling 352-392-6397.
Previous Gainesville Police Searching For Three Men Involved In Shootout Last Month
Next Apr. 22, 2019 Morning News In 90