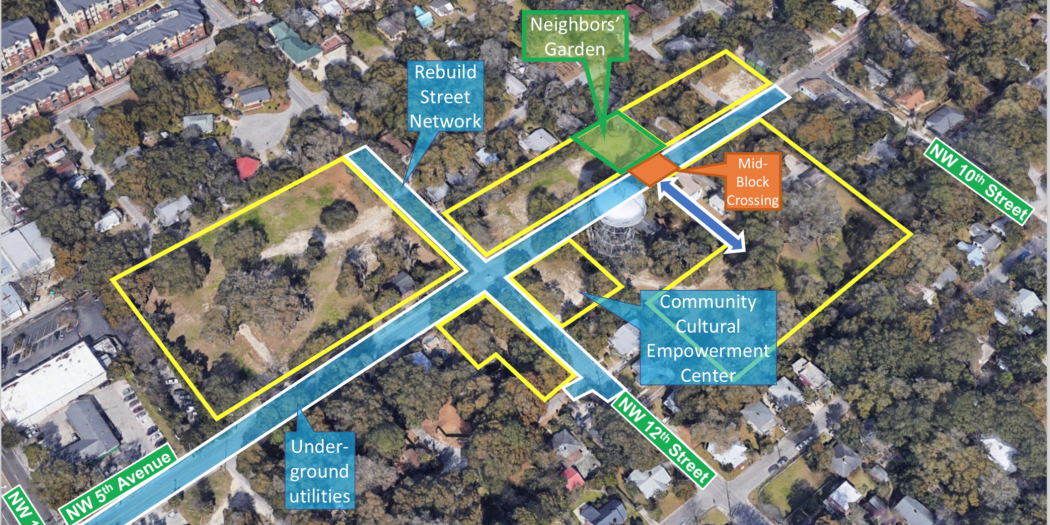 A map of the site location and areas that will be rebuilt.

Another property between Gainesville’s Midtown and Downtown neighborhoods could soon be developed for housing and other uses.

CHW Professional Consultants held a neighborhood workshop Wednesday to discuss a proposed development plan and a special use permit application on six acres of land. The property is located at the intersection of NW 5th Avenue and NW 12th Street.

The workshop followed a similar but unrelated one two days earlier regarding the redevelopment of multiple properties five blocks west in Midtown, including The Swamp Restaurant.

Gerry Dedenbach, professional land use planner and vice president of CHW, said the purpose of the meeting was to inform the public about the plan, application process and offer a chance for public comment.

“The idea is that in an open forum, we’ll do a little bit of talking, but we will do a lot more listening,” Dedenbach said.

The City of Gainesville requires any project seeking development and plan review to hold a neighborhood workshop process. This informs citizens of changes to their community and obtains feedback about the project.

The main concern the public had about the project was how many affordable housing units will be on the property.

Dedenbach said there will be 10 to 12 single- and multi-story affordable housing units on the property. They have not decided on attached or detached homes.

“They will flank either side of the proposed neighborhood garden,” Dedenbach said.

The public also raised questions about parking and the multi-story buildings and how it could take away the character of the neighborhood.

Dedenbach said that by alternating the number of 2-story and 5-story buildings, it will bring a sense of unity and cohesiveness to the neighborhood.

“It won’t be a big block of buildings,” Dedenbach said.

The feedback received will be incorporated into the permit application on May 24.

Dedenbach said the current layout of 5th Avenue in that area doesn’t work.

“These streets are not the best, most comfortable streets to be walking on,” Dedenbach said. “There are utility poles proliferating the sidewalks that make it virtually impossible for persons with disabilities or visual acuity problems to walk there safely.”

The project aims to widen the sidewalks into the property lines.

The design of the roundabout at the intersection is also being called in to question.

“Right now, it’s just this anemic little round concrete dot,” Dedenbach said. “We will be putting a full roundabout better traffic flow and decrease the speed along the street.”

The empty lots at the intersection does not promote a feeling of community, Dedenbach said.

“By rebuilding this area, we can bring a sense of community and safety back into the neighborhood,” Dedenbach said.

They will be rebuilding 5th Avenue from 13th Street to 10th Street, as well as rebuilding a small section of 12th Street.

The utility lines will be moved underground to make space for a street canopy, Dedenbach said.

“We feel that bringing underground utilities into a project is a positive thing to do in a community,” Dedenbach said.

Dedenbach said the team already met with the City of Gainesville staff and Gainesville Regional Utilities (GRU) to review the scope of the project.

“We are working within the existing land use and zoning,” Dedenbach said. “We are not changing anything outside property lines.”

The property is owned by the Gainesville Housing Authority, but is under contract to be sold.

The Gainesville Housing Authority has interviewed many potential buyers, including one of CHW’s clients, Tramell Webb Partners.

“Over years we have done many due-diligence studies because you rarely find six acres of land in Gainesville integral to the very core of the city that doesn’t have anything on it,” Dedenbach said.

The project plans to bring back vibrancy to the community and make it a safe neighborhood.

“We want to reinforce the value of community and bring back a neighborhood that has been neglected for so long,” Dedenbach said.