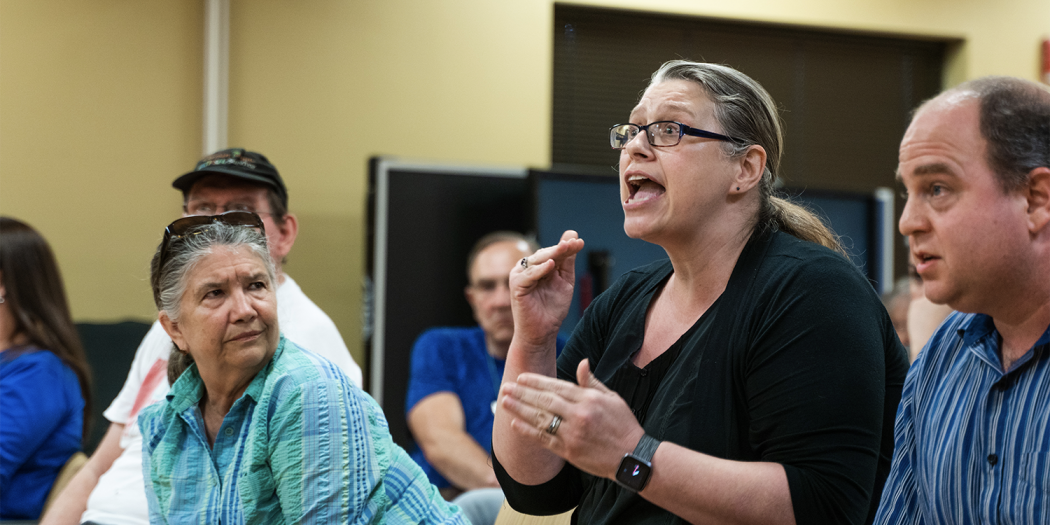 Virginia Hirshik was a central voice on behalf of the residents in demanding more action by the city and Animal Services. "I'm not afraid of anything," Hirshik said. "But I'm afraid of being ripped apart by dogs." (Justin Bright/WUFT News)

Tempers flared as residents of Gainesville’s Northwood Pines neighborhood gathered Tuesday to discuss the city’s new ordinance in response to an uptick in dog attacks.

The emotions were not unfounded. Several of the more vocal residents, like Virginia Brissette Hirshik, fear for the safety of their dogs and loved ones in the wake of recent attacks.

“I’m skeptical with (Alachua County Animal Services’) ability to keep up with this new ordinance when they couldn’t keep up with the issues in the past,” Hirshik said.

Twenty residents of the Northwood Pines and Northwood Oaks neighborhoods attended the two-hour meeting at the Senior Recreation Center to have their voices heard. Gainesville Police Captain Jamie Kurnick, ACAS director Ed Williams and City Commissioner Harvey Ward responded to these concerns in an effort to quell worries that the city isn’t doing enough.

Williams reiterated that the ordinance passed by the Alachua County Commission on April 9 is new and ACAS is unable to pursue cases that occurred before it passed. Pet owners who violate the ordinance are unable to acquire another animal for three years and are forced to microchip, vaccinate and sterilize the animals they have.

“We wanted something that would create liability,” Williams said.

Residents argued that Animal Services has been slow to follow up on reports or phone calls, citing a lack of resources and the ineptitude of its top officials.

Not all of the complaints make it back to ACAS. Some are handled directly by police and ACAS is unable to file a report of their own unless they are aware it happens, Williams said.

“It will be a community effort to solve this,” said Kurnick, who represented the Gainesville Police Department at the meeting. “File reports when you see something.”

Longtime resident Elizabeth Carrillo recently purchased an electrically charged walking stick to protect herself when she walks her four chihuahuas. She says that Animal Services has told her to buy a gun and shoot dogs that threaten her safety.

“I pick up my mail from my car window because I’m afraid to go outside,” Carrillo said.

The conversation between residents and city officials occasionally erupted into a one-sided shouting match in which residents called for more accountability.

Williams apologized before mentioning that he came in good faith to learn and improve the situation on all fronts.

“The city of Gainesville and Alachua County have failed you,” Ward said. “We’ve got to be more creative and do better, that’s all.”

Preventing future attacks before they happen is a top priority for Kurnick. She personally vowed to have conversations with the owners whose animals are responsible for some of the recent attacks.

“We want to educate people about the law before we begin to enforce it very harshly,” said Kurnick, who thanked Hirshik for her commitment to the neighborhood’s safety.

“I don’t want your applause,” Hirshik said through tears. “I want your protection.”

There will be another neighborhood meeting in two weeks to further evaluate the problem. Residents hope that even more of their neighbors attend.

Justin is a reporter for WUFT News who can be reached by emailing news@wuft.org or calling 352-392-6397.
Previous Live: Attorney General William Barr Discusses Robert Mueller’s Russia Report Prior To Release
Next Recovering Hope: The Upward Climb To Normalcy Six Months After Hurricane Michael