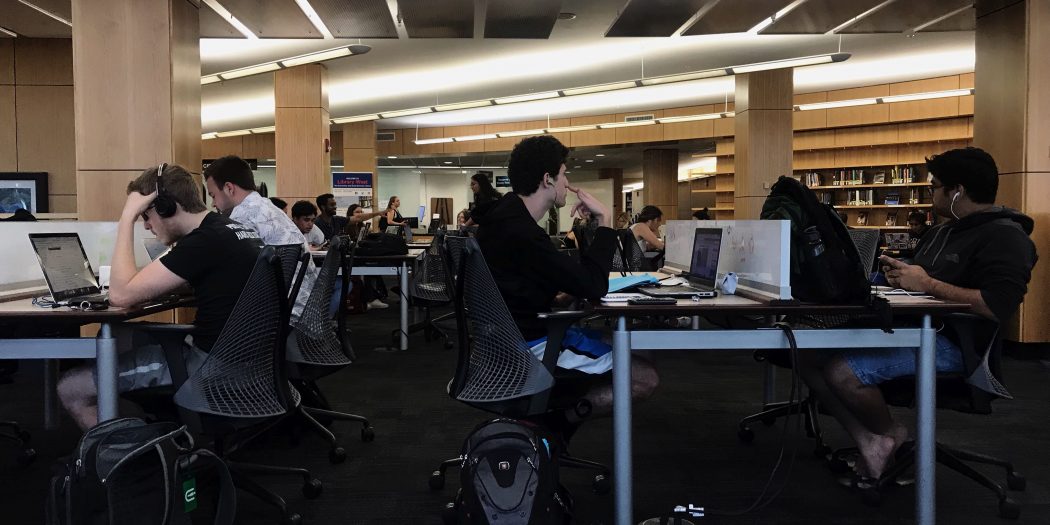 In the summer of 2018, computer science major Nina Boisse, 21, experienced “student homeless week” firsthand for 20 days  — from July 31 until August 20. During this time, which included summer exam week, she and her roommate slept on couches and floors in three different apartments, staying with friends who were often in the process of moving themselves.

“One of the people we stayed with lived in the Santa Fe area, and we are both UF students, so getting to school, work or Butler Plaza was a real commute,” Boisse said. “And in another place, my roommate and I had to share an air mattress.”

“Student homeless week” is a situation many UF students deal with every summer, as those who are moving between apartment complexes realize their lease ends a week or sometimes two before their new lease begins at another complex. These leases often end before summer class terms end, so some students may find themselves between apartments during finals week, a time already stressful enough by itself.

During this turbulent time, Boisse stored as many of her personal belongings as she could in her car, but packing and unpacking clothes and make-up became tedious, especially when she had to get ready for an internship interview, she said.

Eventually, on August 11, Boisse was able to store most of her belongings at a friend’s apartment before driving to her mom’s house in South Florida.

“I was very thankful that I could finally sleep in a real bed,” Boisse said.

City Commissioner David Arreola said it is important for the two groups to maintain an open dialogue to generate community change.

“The student body has a special role in serving the city of Gainesville,” Arreola said. “It is so important to address the issues they bring up and allow everyone’s voices to be heard.”

Since the vast majority of students rent their apartments and houses, renter’s rights issues and landlord-tenant mediation should be especially important to them, he said.

Many students’ leases terminate at the end of July, which coincides with the beginning of finals week for the Summer B and C terms. Yet the new leases for fall semester do not begin until at least one week later. The gap is meant to give landlords time to clean and prepare the vacant apartments for new tenants.

This leaves many students scrambling for temporary housing, Arreola said.

“Gainesville has no jurisdiction over when leases are allowed to end because they are private contracts, but I have suggested advocating for the UF administration to change the dates of finals week, so that students can focus on studying while they still have definite housing,” he said.

Elizabeth Gerwe, 20, is a health education and behavior major who worked in Gainesville as a server over the summer. When she moved up the street from the Enclave, 3000 SW 35th Place, to the Nook, 3415 SW 39th Blvd., she tried to extend her lease or move in early so that she could stay in town for her job, Gerwe said.

“My job wouldn’t let me take off the two weeks, and neither complex would allow me to stay, so I moved home to Jacksonville for the two weeks and commuted to Gainesville for work,” she said.

She stayed on friend’s couches when she needed to because she had to prioritize keeping her job over everything, she said.

Meanwhile, elementary education major Millie Vanto, 19, also had to stay with a friend when she moved between the Courtyards, 1231 SW Third Ave., and Campus Lodge, 2800 SW Williston Road, in 2018, although it was technically against the rules of her friend’s complex.

“I used an empty room to sleep, but had to leave by 9 a.m. every morning when the office opened and maintenance would be around to clean up,” Vanto said. “It was fine in the end, and I’m grateful to my friend who housed me, but it’s still an issue that shouldn’t even exist when students are still in class.”

When Vanto renewed her lease at Campus Lodge, she paid extra so that she could immediately move from one unit into another. However, leasing complications almost forced her to move out on the last day and wait two weeks until she could move back in, she said.

“That would’ve made me angry because I work in Gainesville and I can’t be homeless for two weeks,” Vanto said. “That’s not fair to me, especially when I renewed at the same complex.”

Though some students choose to stay with their friends or family when they can, other students rent Airbnb rooms or hotel rooms during this week. Public health major Chandler Whitenton, 19, is already trying to find such accommodations for this upcoming summer.

“I will be moving from Courtyards to the Niche, 4000 SW 37th Blvd., and I called both apartments and requested an extension to my lease, but I was denied from both,” Whitenton said.

Whitenton is considering renting an Airbnb room or staying with her grandparents, who live on a farm about half an hour southwest of Lake City, and commuting to Gainesville, she said.

“The problem with commuting will be that there is no parking, so either way, it is a mess,” Whitenton said.

Breanna Griffith, a leasing professional at the Nook, estimated that about 95% of residents moving from the complex ask for an extension.

“A lot of our residents are freshman or out-of-towners, but about 40% are renewals,” said Griffith.

Jasmine Walker, the community manager for the Nook Apartments, said that although they have a very small window to get at least 360 beds ready for new residents, the management may allow students to move in earlier if there are vacancies.

“Depending on how our turnover process goes and how quickly we get our apartments ready, we can contact them and say ‘Hey, you can move in early,’ but there may be a possible fee of around $100 or so,” Walker said.

If there are no early vacancies, however, Walker advises students to stay with friends who have renewed their leases and have a definite place to stay.

Toiya Long, the system manager at The Niche, said that although they will not allow renters to move in early or stay late, they try to help students in transition by giving them a list of cleaning tips so that they can avoid extra charges after moving out and get back as much of their deposit as they can.

“We may only make exceptions to this on an individual basis for a medical situation or something of that nature — something that you have no control over,” Long said.

Student Government Senator Zachariah Chou noted that “temporarily displaced” is a more accurate description of students’ situations than “homeless.” Nevertheless, it’s a problem that’s been brought up many times before.

“This discussion happens every year, and the Student Government always says they are going to do something about it, but we don’t,” Chou said.

Like Arreola, Chou said that the easiest solution might be for UF to consider changing the dates of its academic calendar, but he admitted that if it were actually that easy, UF probably would have done it already.

Steve Orlando, spokesman for UF, said such a major schedule modification would take years of planning and discussion before it could be instituted.

“The university calendar is set five years in advance and is tied to the cyclical movement of the entire 365-day calendar,” said Orlando. “To determine the validity of a calendar modification, we have to create 12 years of calendars to verify that any change can work throughout the entire cycle of the calendar. “

For this reason, there is not much room for modification, he said.

Representatives from Elon and Wake Forest said their students don’t have to take summer final exams during the gap between one lease ending and another beginning because their summer term ends before leases end. However, students at the University of Tennessee deal with the same “homeless student week” issue.

Tennessee Student Government member and Student Services Director Maddie Stephens said most leases around the university end in the first week of August, but the next leases do not begin until mid-August. The area closest to campus includes five or six major apartment complexes that function in this way, so it affects many sophomores and juniors, she said.

Stephens said that she experienced this issue herself and “couch-surfed” with friends who maintained their lease, she said.

“Most people are aware of this issue, but we haven’t really been able to explore how we, as student government officials, can step in,” Stephens said.

Stephens mentioned the possibility of the university providing temporary housing on campus. Unfortunately, she said, expansion on campus and ongoing construction in residence halls has rendered this an impossibility.

UF has not yet discussed the possibility of providing temporary on-campus housing, Orlando said.

Until UF and the city can find a more permanent solution, the city commission will continue to hold subcommittee meetings to discuss this issue, among other affordable housing issues.

Previous Homelessness Numbers Up Throughout North Central Florida
Next April 17, 2019: Afternoon News in 90