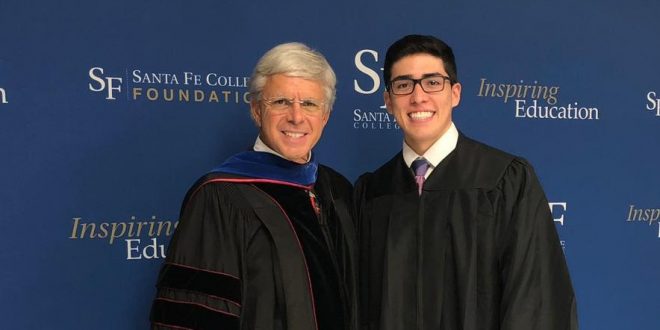 When Sasser asks about Puga’s personal life in their monthly meetings, it helps Sasser come across as less intimidating and makes it feel more like a friendship, Puga says. Sasser, right, and Puga, left, smile as friends on Puga’s graduation day. (Photo courtesy of Puga.)

In 2002, the junior college located in northwest Gainesville hired its fourth president in school history.  Seventeen years later, Jackson Sasser reflects on his tenure at Santa Fe College as his Feb. 1, 2020 retirement date draws near.

Some pillars of his career include a transition to include four-year bachelor-degree programs in 2008 and the doubling of the college’s satellite campuses including the Davis Center in Archer in 2003, the Watson Center in Keystone Heights in 2005 and the Perry Center in Alachua in 2009. Educational assistance programs were also launched, such as My Brother’s Keeper in 2006, which helps black male students advance through college.

Sasser remembers those successes along with the numerous challenges he endured while at the helm of one of the nation’s premier community colleges. Looking back, Sasser said nothing tested him more than the art incident of 2002, just three months into his presidency.

The college art gallery opened an exhibit titled “Freedom of Expression,” which invited contributions from local artists.  Some of the art pieces featured Jesus Christ in different sexual depictions.

The college moved the art into a room that was restricted to minors unless accompanied by a parent, he said.

The college received complaints from pastors, priests and the Catholic League for Religious and Civil Rights. In one of his first meetings with the board of trustees, which included a pastor,  Sasser was asked to take down the artwork. He felt taking it down would constitute an infringement of academic expression — so it stayed.

He laughs about it now, but he can’t forget how gut-wrenching the situation was for him at the time.

Sasser was president at Lee College in Liberty, Texas, before coming to SFC. His first job in higher education was as director of evening programs at Calhoun Community College in Decatur and Huntsville, Alabama. He later returned to serve as interim president after being a provost in Virginia.

As Sasser settled into his role, he set several goals including expanding international affairs to the curriculum.  He said the objective was to enrich students’ concepts of culture and help them compete in a global job market.

Not all students can participate in a foreign exchange program to China or Ukraine, Sasser said. Thanks to the Fulbright program, they can learn from an overseas professor or sit next to an international student.

Alexander Rodriguez, a sophomore at the college,  benefited from the broader global learning experience.  Rodriguez said in class he gained a better understanding of world cultures and forged a friendship with a student from Turkey.

“I think it’s pretty cool that people from other countries are coming here, to Santa Fe, for college,” Rodriguez said. “Everyone you meet and everything you learn might be different somewhere else, or our curriculum might be different from someone else’s curriculum, so you just have to go in with an open mind.”

Alora Haynes, department chair of the fine arts department, has worked with the dance program for 30 years. She’s served under three presidents and said Sasser did the most for the arts.

“None of this would’ve happened had he not been brave enough to take a calculated risk and build a $17.2 million facility in an economic downturn,” Haynes said. “That is vision and commitment.”

Sasser also identified the historic inequities of east Gainesville.  By expanding the Blount Center, located in downtown Gainesville,  he hopes to assist local small businesses and start-ups in early stages of development to provide upward mobility for eastside residents.

“A lot of students don’t get to see the inner-workings of making (the Blount Center) happen,” said student body president Alejandro Puga. “But going to those meetings, I’ve seen that (Sasser is) working hard, talking to state legislators and making sure it actually happens.”

Sasser credited the faculty and the culture at Santa Fe for his success.

Javan Brown recalled the influence Sasser had on that culture.  Brown, faculty member and coordinator for My Brother’s Keeper, remembered a Monday in April 2017 when he came to work and saw a missed call from Sasser.

Brown’s mind jumped to some top-of-the-agenda topics and quickly returned his call. Sasser answered despite being in the middle of a meeting.

“He must’ve seen me calling and thought it was that important to answer,” Brown said. “When I checked the voicemail, I realized he was calling to wish me a happy birthday.”

Kathie Russell, presiding officer in the Santa Fe College senate, said Sasser’s open-door policy makes him accessible to his faculty in a way other leaders aren’t. She hopes his successor can live up to the legacy Sasser left at Santa Fe.

“(Sasser’s) mission is really to help his students succeed in life and become those lifelong learners as well,” Russell said. “His mission really lives up to the sentiment of the college.”

Whoever his successor is, Sasser hopes he or she will share the same gratitude for faculty, respect for UF,  an insatiable academic curiosity and an appreciation for athletics, the arts and the international commitment.

And for his students, he leaves some words of advice: Find something you love. Sasser said each student should pick a major, not because of job potential, but because he or she truly loves it.

“If that’s what you love more than anything, there will be a life-sustaining job. I just really believe that,” Sasser said.