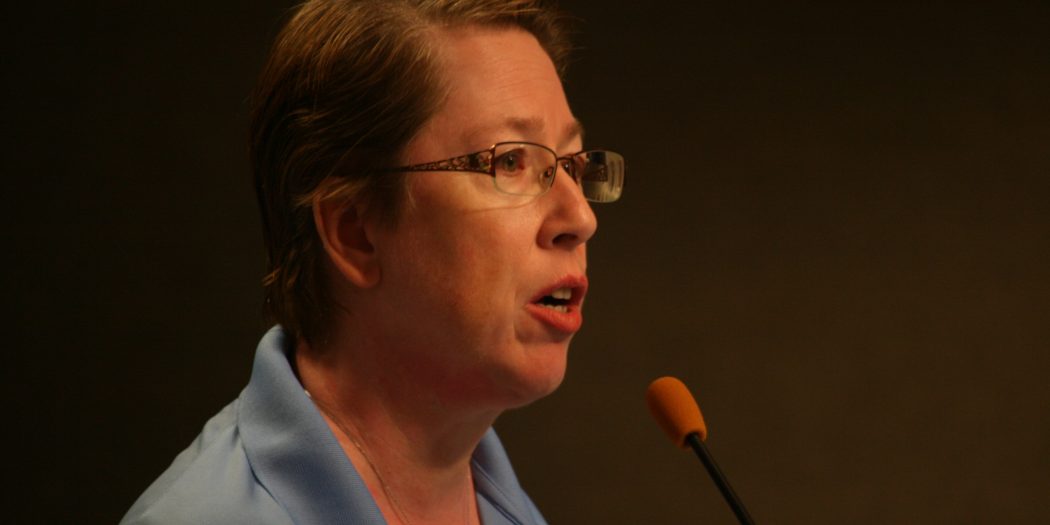 Arlene Stewart speaks Tuesday night at the Alachua County Commission meting. Her mother was walking her puggle Fred in December when the two were attacked by another dog. Fred was killed. She said she cannot send her mother to PTSD counseling related to the incident because they have no ability to pay for it. She asked the county commission for a provision to hold owners of attacking dogs financially accountable for the injuries their animals inflict. (Lindsey Breneman/WUFT News)

By Lindsey Breneman and Cecilia Lemus

Still, many citizens in attendance were unsatisfied with the results.

“This ordinance would let us put the responsibility where it should be: with the owners of the animals,” said Ed Williams, director of Alachua County Animal Services.

Under the ordinance, there are minor and major violations. Minor violations include pets creating a public nuisance, dogs escaping or being unleashed, failing to obtain a rabies vaccination and tethering your animal. Major violations are violent dog attacks and having a dog that is classified as dangerous. If a person accumulates more than two minor or more than one major violations, he or she will be labeled irresponsible.

As such, he or she would need to sterilize and microchip all their pets within 30 days. Those labeled will be unable to obtain any more animals for three years.

At least two of the recent series of attacks were perpetrated by dogs that’s owners would have been labeled irresponsible if this ordinance had been enacted before.

This new legislation follows a trend of similar ordinances across the country. Omaha, Nebraska, Casper, Wyoming, and Haddonfield, New Jersey all adopted similar laws in the past year to attempt to hold “reckless” pet owners more accountable for their animals’ behavior.

The commission also approved an addition $192,703 for Animal Services to hire two additional officers, purchase vehicles, and pay for their five months of training. The agency’s director said it plans to switch its full-staff coverage to 7 days per week from 7 a.m. until 11 p.m.

Ray Washington stepped up to the podium at the public comment portion and asked the commission to look into the department.

“You are rewarding and giving money to an agency that has not been shown to be doing its job,” said Washington.

Margot Deconna, a 33-year-old spokesperson for the Humane Society for North Central Florida, said her organization strongly supports the ordinance as a first step to find a positive way forward in curbing the frequency of attacks.

She said the next step should be having discussions around breeding and breeding licensing.

“There is no reputable rescue organization in Alachua County that adopts out animals that are not spayed or neutered first,” Deconna said.

She said the county needs to investigate the other ways of acquiring a pet then come up with regulations to ensure that all owners are getting their animals spayed, neutered and vaccinated, because unaltered animals, especially males, have a much higher tendency toward aggressive behaviors.

Last year, Animal Services began a licensing program that charges $10 to register with the county a sterilized and microchipped dog but $40 for those that are not, Williams said. Some veterinarians, though, do not issue licenses, so compliance with this regulation is voluntary. Williams said he thinks the commission should make it mandatory.

Commissioner Robert Hutchinson plans to propose a specific fee for owners who fail to neuter their animals, rather than the differential licensing program.

A change was made to the ordinance in which the violation of pet licensing was removed from the code ordinance.

“If we have vets that are not saying ‘You need to have your dog licensed’ when people go in and take their animals, then I would hate for people to get penalized for that. They still need to have licensed animals, but we just need an opportunity to get that program moving in the right direction,” County Manager Michele Lieberman said.

In Alachua County, there were 499 dog bites recorded last year, according to the Florida Department of Health.

Commissioner Ken Cornell said he hopes for strong enforcement and good documentation with this ordinance as it is implemented.

“Public safety is paramount,” he said, “and whatever we need to do prosecute those folks that cannot take care of their animals, I want us to do that.”

Lindsey Breneman is a reporter for WUFT News. She can be reach at 352-294-6397 or news@wuft.org.
Previous High Springs’ Golden Peanut Co. Closes
Next Public Safety Department Heads Present Data, Solutions For I-75 Safety