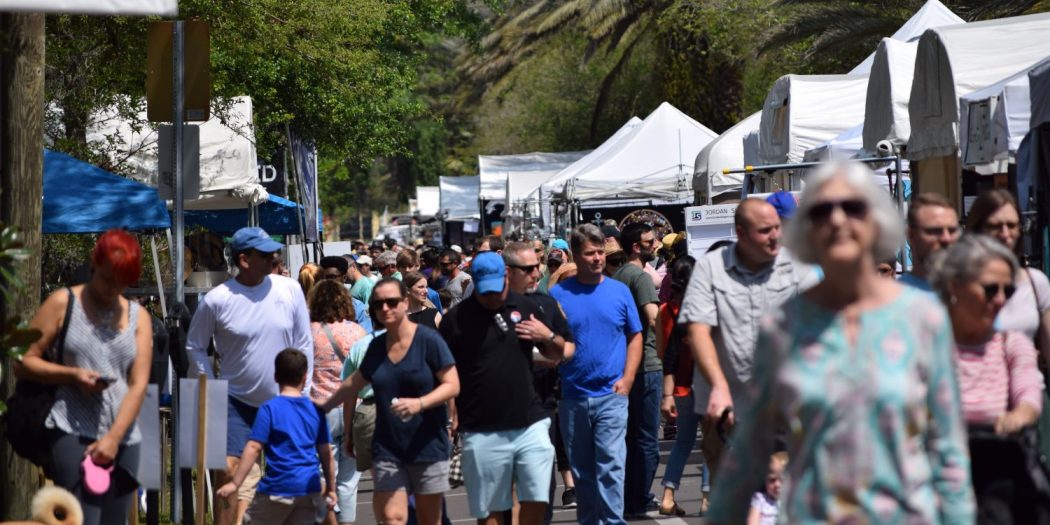 Beautiful artwork combined with laughter and music filled the downtown streets of Gainesville over the weekend.

“It is a big deal,” Raul Villarreal, Santa Fe cultural programs coordinator, said. “You only turn 50 once, so we were very much looking forward to it.”

The festival included singing, dancing, art exhibits and 17 cultural food vendors from 9 a.m. to 5:30 p.m. on Saturday and noon to 5 p.m. on Sunday.

It was held on NE 1st Street, between 8th Avenue and 2nd Avenue.

The festival first debuted a half-century ago as a small gathering of local artists outside the Thomas Center area and was organized by Barbara Kirkpatrick, Villarreal said.

Kirkpatrick died at a young age, but her legacy lived on.

As the founder of the popular Gainesville festival, she is honored with a portrait hanging inside the Santa Fe College Spring Arts House, Villarreal said.

The event grew from a handful of local artists to over 200 artists gathering from around the country to showcase their work, Villarreal said.

“In my opinion,” he said. “Art makes our community a lot more cultural and it brings a unique perspective of where everyone is from and why they participate.”

Lotus Campbell, 16, is a sophomore at PK Yonge High School. He is one of the youngest artists at the festival to have his own booth.

Campbell’s form of artwork was inspired by Fordite, which is an automotive paint that is intended to be cut and polished.

“I take paint off of the 34th Street graffiti wall and recycle it,” Campbell said. “Then, I turn it into jewelry.”

This is only Campbell’s second year at the festival, but some of his neighboring booths have been showcasing their work for decades.

Gainesville’s own Alyne Harris, 76, is a well-known southern folk artist who has attended the Spring Arts Festival for the last 25 years.

“I enjoy making nature,” Harris said. “I do a lot of birds, figures of people, lakes and angels.”

She has work featured in seven galleries, a backdrop in the movie “Nights in Rodanthe” and in the book “Souls Grown Deep: African American Vernacular Art of the South” by William Arnett.

“I just love painting,” she said. “I’ve been doing art a long time and my favorite place to do it is by music, which is why I love this festival.”

With more than 220 booths, two of them are run by Santa Fe College students: the Santa Fe Artist-Entrepreneurs Program and the Florida Hemingway Society.

Villarreal is one of the founding members of the Florida Hemingway Society, which was at the festival for the first time this year.

The society started in October 2018 and has over 80 members including 4th year English major Alec Kissoondyal, from Gainesville.

“When a lot of people think of Hemingway, they think of his literature, Kissoondyal said. “However, his influence extends far beyond that.”

Kissoondyal is a student ambassador for the Florida Hemingway Society. He said his main goal is to educate his peers on the society in hopes that they will not only develop an interest in Hemingway, but to the art, films and literature that he inspires.

“This society offers many opportunities for young artists,” Kissoondyal said. “The opportunities range from just learning about Hemingway’s life, to getting artwork featured in his booth at the Spring Arts Festival.”

The society members showed off their work during the festival and attempted to recruit new members, which wasn’t hard to do with the large crowd.

Villarreal said that on average the festival ranges from 50,000 to 100,000 attendees. This year with the warm weather and clear skies, there was nothing short of this range, he said.

“Art not only engages the community, but it also starts a really wonderful dialogue between the visitors of the festival and the artist themselves,” Villarreal said. “In short, art brings people together.”

Tori is a reporter for WUFT News who can be reached by calling 352-392-6397 or emailing news@wuft.org.
Previous House Bill To Expand Guardian Program Temporarily Postponed
Next Apr. 8, 2019: Morning News In 90