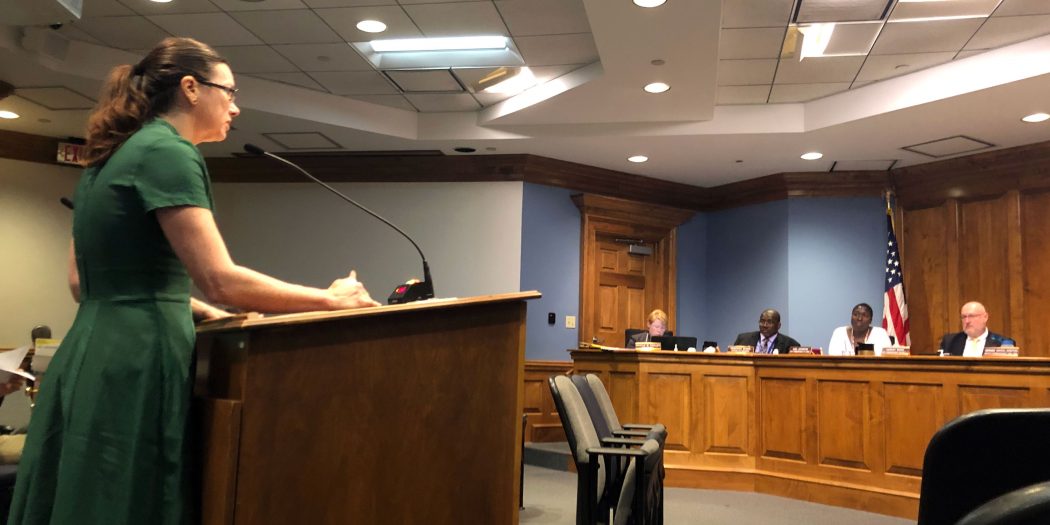 Gainesville resident Barbara Howe, 43, shared her own dog attack experience with the commissioners during a Gainesville City Commission meeting Thursday, April 4, 2019. Howe said she feels as though action is only taken after aggressive dogs kill something or someone. "My dog was not killed," she said. "So nothing happened. The dog continued to live there and I would never walk her past that house. It was scary to go out." (Rachel Spencer/WUFT News)

Gainesville residents gathered at the city commission meeting Thursday to voice concerns over the series of dog attacks impacting the community.

While the commission proposed no immediate action on the dog attacks during the meeting, City Commissioner Harvey Ward had spearheaded the conversation in hopes the discussion would lead to a shared sense of direction between the city, the county and residents

Prior to the meeting, Ward said he was at a loss for how to handle the situation but wanted to broach the issue to try to find solutions.

“The reason I put it on the agenda was to make sure we begin discussion with an understanding that this is not a problem that is going to go away — it is an ongoing issue,” Ward said. “We have to change what we’re doing because it doesn’t work.”

There were 499 reported dog bites in Alachua County in 2018, an increase since the previous year, according to the Florida Department of Health.

The most recent attacks in the county have resulted in the deaths of a 2-year-old boy, three dogs and one cat, in addition to several injured people, and those attacks all took place since September.

Resident Chris Carney, 49, said that irresponsible owners are to blame for the regularity and severity of these incidents.

“The dogs themselves will reflect the will of their owners,” Carney said. “There are certain individuals that will desire more aggressive dogs and work to make their dogs more aggressive.”

Carney said that while certain types of dogs — like pit bulls — are often the perpetrators of such attacks, the blame should not be associated widely with that type of dog.

“As far as pit bulls go, irresponsible pet owners are unfortunately drawn to that breed,” Carney said. “The breed itself — there are great pit bulls. The difference is that their owners care for them and don’t want them to become aggressive. They spay and neuter their dogs, and they socialize them.”

Anna Peterson, a board member with the non-profit organization Plenty of Pit Bulls, which rescues and rehabilitates dogs, specifically pit bulls, explained that breed is not the most effective predictor of dog aggression.

“The problem is at the other end of the leash,” she said. “The variables most associated with dog aggression are dogs that are intact — aren’t neutered — dogs that aren’t well socialized, meaning that they are tethered, they’re stuck in the backyard. They don’t get regular interactions with humans.”

More than 900 U.S. cities have enacted breed-specific legislation to try to decrease problems with dangerous dogs, according to DogsBite.org, but Peterson said this is not a productive solution.

“There are plenty of cases where there have been breed bans in Miami, Denver and other places, but the percentage of dog bites doesn’t go down. The number doesn’t go down; it’s just a different dog doing the biting,” Peterson said.

Carney said instead of seeing breed-specific legislation emerge in Gainesville, he would like to see legislation regarding irresponsible pet owner designations that would center on people who are abusing, neglecting and creating incidents with their dogs.

Mark Sexton, Alachua County’s communication and legislative affairs director, said the latest dog attacks have been particularly traumatic and severe, ranging from the death of young dogs to the death of a 2-year-old child in the last few months.

“There are hundreds and hundreds of loose animals, dog bites, and these things happen with great frequency,” Sexton said. “There are hundreds, if not thousands, of these events yearly that both law enforcement and animal control have to respond to.”

Under the current protocol, both law enforcement and animal services officers respond to incidents across the county with potentially dangerous dogs.

Ward indicated that while certain neighborhoods in Gainesville have had multiple incidents, the problem is not isolated.

“It’s happening across our city; it’s not any one neighborhood that it’s coming from,” Ward said, “although I will say Northwood Pines has had a lot of very specific problems that tend to go back to the same couple of homes. That’s a big concern for me.”

As a response to the dog attacks, Alachua County commissioners will be considering a new ordinance at their April 9 meeting that would increase the repercussions for being an irresponsible owner.

These repercussions and potential changes could include fines and prohibiting the individual from owning animals.

Ward said the city’s next moves depend on what happens at Tuesday’s county meeting. Should he be uncomfortable with the county’s legislative steps, he will add the dangerous dogs issue onto the next agenda for further discussion.