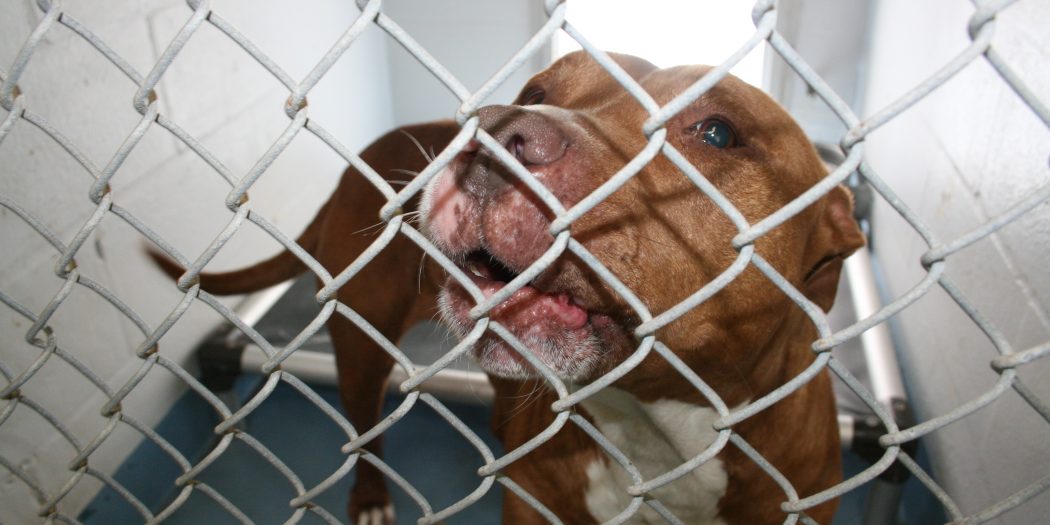 Sandra Braden's American Staffordshire mix, Jake, escaped from her apartment when she left the door momentarily ajar on March 31. He is now in Animal Services' custody after attacking a woman and her dog as they walked along Northwest 62nd Terrace that night. (Lindsey Breneman/WUFT News)

The dogs’ barks and howls from Reynaldo Davila’s house echoed at all hours along Northwest 30th Terrace in their Northwood Pines neighborhood, said Wayne Carney, the city’s wellness coordinator. He and his wife have a 2-year-old son and a terrier Dachshund mix.

In fall 2018, the dogs escaped through Davila’s rotting wooden fence and spotted the terrier. The horrified Carneys watched as the animals chomped at and rattled their chain-linked fence and wrestled. Worried they would get through, the husband called Alachua County Animal Services. A woman there apologized, but said the agency could not act until an incident occurred.

“So,” he asked, “basically my wife, kid or dog has to be attacked before you can do anything?”

Davila’s dogs escaped again that night — but this time their rampage through the neighborhood ended with the terrier, named Penny, fighting for her life in a veterinary hospital, and two of the pit bulls dead. A police officer shot one of them. Frightened neighbors suffocated the other.

Dog bites on the rise

The attack on the Carney’s Penny was among the latest in the series of vicious dog attacks in Alachua County, which has seen a steady rise in dog bites since 2014. In September, also in Northwood Pines, three dogs attacked a woman and her support dog. In February, dogs mauled another woman and dog in the Hazel Heights neighborhood. On March 8, dogs killed a 2-year-old boy in High Springs.

And on Sunday, a woman and her dog were attacked by a pit bull outside an apartment complex near the Northwood Village Shopping Center. According to an Animal Services report, the woman was bitten but did not seek medical attention, however, her dog was so severely injured that it had to be euthanized. The attacking dog had slipped through the doorway when its owner left open her apartment door as she picked up something just outside, the report states.

On Tuesday, the county commission will consider a proposed ordinance intended to prevent such attacks. The measure would hold an “irresponsible pet owner” accountable for violations ranging from escaped and tethered dogs to dogs biting or attacking people or other animals.

While stressing that it’s the responsibility of dog owners to keep them restrained, Animal Services Director Ed Williams said his agency is trying to curtail vicious attacks.

“We really, really are trying to work hard to come up with better solutions here but, you know, that doesn’t mean that any of this was our responsibility,” Williams said.

“So basically my wife, kid or dog has to be attacked before you can do anything?”

Northwood Pines residents said the agency should do more. They have reported not only Davila, 43, but also Nathaniel “Tom” Pettiford, also 43, who lives one street over on Northwest 29th Terrace and owned the dogs involved in the September attack. Davila and Pettiford confirmed what neighbors suspected: They were breeding pit bulls together.

Williams said the breeding could have contributed to their dogs being aggressive.

Pettiford is facing charges alleging animal cruelty and culpable negligence in Eighth District Circuit Court and was banned from owning dogs in connection with the September attack. His dogs were euthanized after Animal Services classified them as dangerous per state law, and he could not get $500,000 liability insurance, Williams said.

At a court hearing in September, Pettiford called the incident “very tragic” and apologized to Linda Swinburn, who was walking her dog Bella when his dogs Rousey, Yokia and Akuma attacked them. He also said that his dogs weren’t normally aggressive.

“They (tried) to make it like they were monsters, but that was not the case at all,” Pettiford said Wednesday.

Animal Services also confiscated Davila’s three remaining dogs from the March 22 incident. Williams said they will be deemed dangerous, which means Davila must have them sterilized, microchipped and pay the county $400 for each dog returned.

Davila said, “Whatever I need to do to get my dogs, I’m going to do it.”

Before that Friday night turned horrible, the Carneys – he’s 33 and she’s 32 – had bought pizza from Papa Johns, put their son Ethan to bed and went to their back porch for a date night. Penny was with them. She began to bark just past 8 p.m. They could hear the dogs against the fence.

The husband ushered Penny and his wife inside. He went back out and shined a light on the dogs: He saw only four of them. Then he saw the hole. The dogs had created a gap large enough to squeeze through the fence. Carney realized the missing one was in his yard. He hurried indoors and called 911 as two dogs ran away. The other three went down 30th Terrace.

Amber Banks, 28, and her husband Dustin Banks, 31, were outside their home when the pit bulls came. The largest one charged at her. She ran through the garage and into the house. The dogs followed. One rushed through the doorway and locked its jaw around their dog Lucy’s neck. Dustin Banks pried open its jaw, but it bit down again. He unhinged the pit bull again and slammed it against a door. His wife held Lucy while he threw the pit bull outside.

“If you feel threatened, shoot them.”

Dustin Banks retrieved a metal baseball bat and followed the dogs down the street. Carney was still on the phone with 911 when he heard the bat pounding the pavement at 8:30 p.m. Banks shouted at Carney through his glass front door: “Hey! One of your dogs attacked my dog and my wife!”

Carney opened the door to yell that the dogs weren’t his — they belonged to the man next-door — when Penny darted out. Three pit bulls were on her within seconds. The terrier shrieked as the dogs locked jaws on her in a tug-of war. Banks beat the dogs with the bat, while Carney threw punch after punch. Each time they fought one dog off, another latched on.

When the dogs finally let go, Carney lifted Penny above his head and sprinted into his house. Neighbors created a human wall between the dogs and his car. One neighbor drove him and Penny to UF Health Veterinary Hospital. Carney had to pay $3,000 before vets would operate.

Davila had corralled the dogs that attacked Penny into his house as police arrived on scene.

Gainesville Police Inspector Jorge Campos said officers found three neighbors holding down the other two pit bulls. One said he could not hold on any longer. So Cpl. Dylan Hayes-Morrison told him to let it go. The dog turned and looked ready to pounce on the two other people. So Hayes-Morrison shot the dog with his service revolver, Campos said.

“He had no other option to protect himself and the others in the yard,” the inspector said.“If you feel threatened, shoot them.”

Two neighbors had held the last pit bull so tightly it suffocated, he said.

When Colleen Regan, a 36-year-old mother of three, moved next door to Pettiford in April 2017, he had four pit bulls and a litter of puppies. Each time his dogs jumped the fence into her backyard or chased neighbors down the street she called Animal Services. Help rarely came.

“’We are unable to come out,’” Regan said she often heard. “’If you feel threatened, shoot them.’”

In July 2017, Lisa Ehrbar, who lives nearby in Northwood Pines, was walking her three Chihuahuas when she saw a pit bull staring at them from Pettiford’s house. She crossed the street and kept walking, but soon heard one of her dogs, Spike, shriek. The pit bull had him in its mouth. Ehrbar kicked it and pried its mouth open to free her dog. Spike had deep punctures in his neck and hind leg that required surgery. She filed reports with GPD and Animal Services.

On June 17, 2018, Regan returned from a Father’s Day celebration to find Pettiford’s pit bulls in her yard. They chased her to her patio; she slammed one of their heads into a door. No one answered her call to Animal Services, so she called GPD. Regan said she was told to file an affidavit; it was the first time she had been told to do so after more than a year of calls. She estimates she had called Animal Services and GPD 20 times each about Pettiford’s dogs.

GPD and Gainesville Fire Rescue responded to the September dog attack, but not Animal Services. A police officer called dispatch three times in an effort to get the agency to respond, only to have a supervisor there say the incident did not warrant immediate attention.

Animal Services arrived two days later. In the interim, Pettiford moved his puppies to Davila’s home, said Williams, the agency director. One was in the pack that attacked the Carneys’ terrier.

According to the Carneys, on March 18 they left a message with Animal Services about Davila’s dogs attempting to get through the fence. They were attacked four days later.

Williams said Davila’s dogs were in a crate when he visited days before.

Under the “irresponsible pet owner” ordinance proposed to the county commission, someone would be considered as such if cited for related violations twice. He or she would need to pay a fee to keep up to two pets; they would have to be fixed and microchipped. County Commissioner Robert Hutchinson said pet adoption agencies would receive the offenders’ names.

Some residents said having such an ordinance would not be reassuring.

“Animal control already doesn’t enforce the ordinances in place,” Regan said. “So who is going to enforce monitoring of these irresponsible pet owners?”

After the September attack, Williams said, he realized that Animal Services was not alerted each time police responded to an animal call. All of his employees now get an alert on their phones whenever police are dispatched for one. He also said his agency aims to hire more officers.

“Yes, we made some mistakes, and we’ve tried to correct them” said Williams, who added, “I’m trying to look forward and make sure we’re handling the cases appropriately now.”

Hutchinson said the county has another problem in tracking dog ownership: some veterinarians do not license dogs. He estimates that less than 20 percent of dogs in the county are licensed.

“We’ve got a very imperfect system of who owns what dog,” the commissioner said.

Davila said he apologized to the Carneys for the attack by his dogs. He said he had bought an electric fence earlier that week but had not yet installed it. Davila also said police killed his best dog, Dragon, and that his 5-year-old son misses the pet he used to ride around on in the house.

His neighbors said they will never feel safe if Davila owns dogs.

After the attack against his family, Wayne Carney sought reassurance that it would never happen again. Animal Services advised him to bury chicken wire beneath his fence and buy a gun.

Virginia Brisette Hirshik, 51, lives across the street from Davila. Hirshik called GPD one day in November to complain that Davila’s pit bulls were barking for 30 minutes straight.

Hirshik said it’s not about the type of dog, but how they’re treated.

Lindsey Breneman is a reporter for WUFT News. She can be reach at 352-294-6397 or news@wuft.org.
Previous April 4, 2019: Morning News In 90
Next Alachua County Women Create Local Movement For Sexual Assault Awareness Month