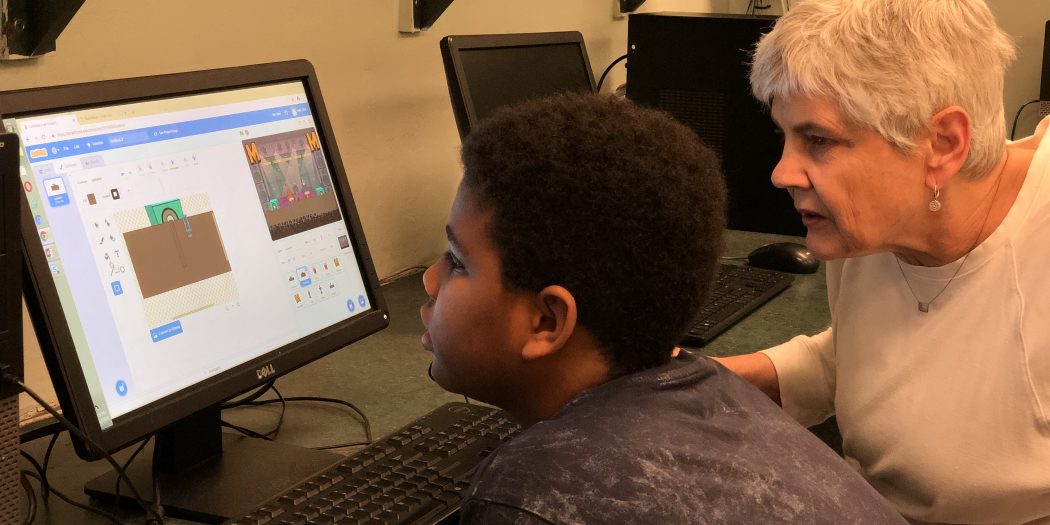 Matthew Washington, 10, calls on Edith Williams for help and watches as she shows him how to use the block-based code on Scratch. (Angel Ransby/WUFT News)

Most K-12 Schools Don’t Teach It, But These Gainesville Students Are Learning to Code

Above: Click play to hear an audio version of this story that aired on Florida’s 89.1 WUFT-FM.

Their friends may just play computer games, but some Gainesville children are learning to create them.

In a computer lab at Woodland Park Boys and Girls Club each Wednesday afternoon, a group of pupils ages 9 to 11 take on a coding assignment that uses Scratch, an introductory program created by the Lifelong Kindergarten Group at the Massachusetts Institute of Technology.

Scratch uses block-based code rather than text-based. By simply clicking, dragging, dropping and customizing, the students can make animations, games and interactive stories.

“Ms. Edith,” they call out to volunteer teacher Edith Williams whenever they need help.

“For their generation, if you know how to code, it’s going to give you a leg up in a lot of places,” said Williams, a freelance graphic designer who grew up in Gainesville, and has been volunteering at the Boys and Girls Club in 2014, the same year its computer lab opened.

“They say that it’s as important as knowing another language or knowing math or how to read or how to write,” she said.

Williams said she was attending a graphic design conference in New York when she was introduced to Code Club, an organization from the United Kingdom that supports an international network of volunteers who teach a coding curriculum to children.

“They said, ‘You’re gonna learn about coding by teaching it,’ which I have,” she said.

Adrienne Kinard, program director at the Boys and Girls Club, said the coding class offers students to gain experience they normally get at their age.

Williams said her biggest challenge is having enough working computers for all of the children who come to her class. Some weeks she has had to teach just boys and girls the next. Other times, they all sit together at computers so everyone can participate.

The girls in Williams’ class tend to focus better than the boys. Many people fail to realize that girls can be stronger or just as good as boys in coding, she said.

Many other people near and far are aiming to make sure girls aren’t overlooked.

“Women and girls across the country are coming together to correct centuries-long power imbalances across lines of gender, race, sexuality and more,” said Reshma Saujani, CEO and founder of Girls Who Code, an international organization launched in 2012.

In an interview with CNBC, Saujani, who has a background of law and politics and is not a coder herself, said, “I was running for office, and I would go into schools and see dozens of boys clamoring to be the next Steve Jobs or Mark Zuckerberg, and I thought, ‘Where are the girls?’”

Some students with the Teaching Youth Programming Essentials Initiative at the University of Florida (UF-TYPE) are working to combat the gender gap in computer science.

UF-TYPE is a computer and information science and engineering organization that not only coordinates a Girls Who Code chapter, but also the Gainesville Coding Club. The club sends students from the university into to local middle and high schools to teach boys and girls to code.

Isabella Bond, a second-year computer science major and the chapter’s president, said she began coding at her middle school in Jupiter, Florida, pretty much by accident.

“All of the elective courses were full at my middle school, so I was placed into a beginner level coding class that I would have never signed up for on my own,” Bond said.

She then attended a computer science magnet school where she immersed herself in coding.

At Bishop Middle, the UF students use a JavaScript curriculum created by those who have since graduated from the university.

“Teaching programming is very rewarding,” Bond said. “I love seeing students who might have never been exposed to the field super-engaged in coding. It makes everything worth it.”

Tyra Holtom, 11, a sixth-grader at the middle school, said that while her peers seem to dislike school and learning, she likes to learn new things, and coding is one of them.

“You have to really pay attention, or you might mess something up or get confused,” Tyra said.

Rong Zhang is a lecturer with UF’s computer and information science and engineering department, and UF-TYPE’s adviser. Zhang said K-12 schools have few teachers who can code.

“They make the students feel like, ‘Oh, this is an outside curricular thing, so it’s not something I should know for my age right now,’ but that should not be true, honestly,” she said. “Unless they have a designated teacher to teach, I don’t think that’s an easy fix.”

“People feel that programming is not easy to master,” she said. “That may be true like 30 years ago, but not now because there’s a lot of effort to … make it easy to understand.”

Angel is a reporter for WUFT News who can be reached by emailing news@wuft.org or calling 352-392-6397.
Previous Judge Gloria Walker Makes History With Her Investiture To Florida’s 8th Judicial Circuit Court
Next The Point, March 25, 2019: Where Gainesville Students Are Learning To Code