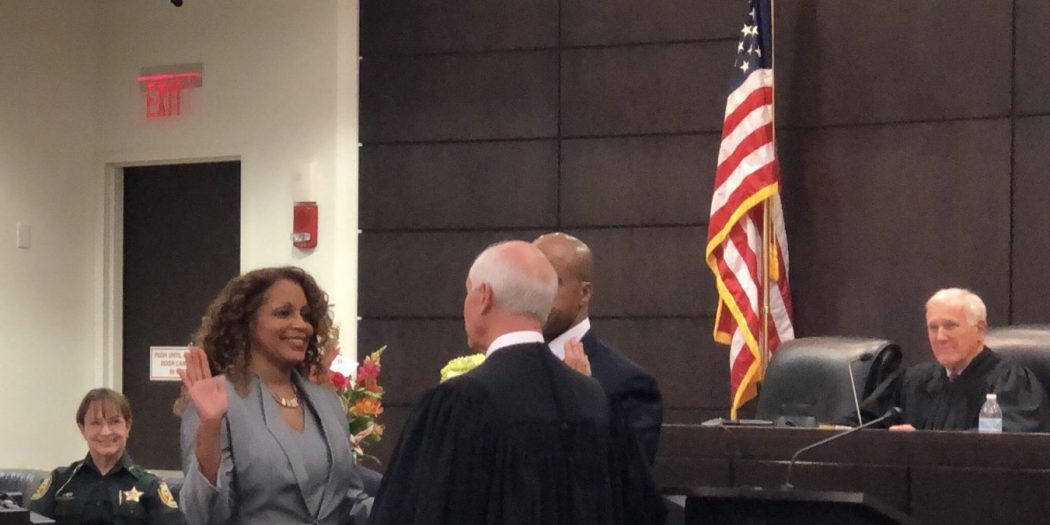 New 8th Circuit Judge Gloria Walker remarked that she has lived the American dream following her investiture ceremony on Friday.

Investitures are the formal and ceremonial enrobing of a duly elected official, Chief Judge James Nilon said. In this case, Judge Gloria Walker had been elected in November and formally enrobed in March.

Two courtrooms full of friends, family, judges and city officials from all over Florida came together to celebrate Walker making history, as she is the first African-American to be elected to this judicial seat.

“Never in 100 years would I ever have thought that someday I would be sitting up here,” Walker said. “When I started law school, I was 30 years old and had someone told me that by the age of 50, I would be sitting here as your next circuit court judge, I would have said ‘stop it.’”

Walker was elected in the November general election with more than 56.1 percent of the total vote. She officially took her position Jan. 8.

During the ceremony, Walker took her oath with the former Chief Judge Toby Monaco, received her judicial robe and was presented her nameplate on behalf of the Florida Conference of Circuit Judges.

Allison Thompson presented her remarks to the court and Walker. She is the former executive director of Three Rivers Legal Services, Inc. where Walker worked under her for 16 years.

“She is a joy not just for us,” Thompson said. “But a celebration and joy to the community, to the circuit, to women and to little girls of color who dare to dream.”

Thompson said Walker was once that little girl.

Walker found a different path to Gainesville compared to the majority of the circuit. She grew up in Brooklyn and was raised by a single mother with a 5th-grade education. She said she was never expected to graduate high school, much less graduate from the University of Florida with honors and then again from the UF Levin College of Law with honors.

Before running, Walker asked Thompson, her family and some of her close professional friends if she should go through with this.

They told her that she would be the first African-American running in Alachua, Baker, Bradford, Gilchrist, Levy and Union Counties.

Walker imitates her friend, “you could do just fine in Alachua County.”

She was advised to run for the county court judge.

“You are never going win as a circuit court judge,” she was told repeatedly, she said.

Still, she went for it.

“I did not hear that I was incompetent or incapable or could not do the job,” Walker said. “What I heard was you’re a female and you are competent and capable and able to do the job, but you are of color and we have never in the history of the circuits, since 1867, had a woman of color run or hold this seat … and so, here I am.”

Tori is a reporter for WUFT News who can be reached by calling 352-392-6397 or emailing news@wuft.org.
Previous Commissioner Gail Johnson Leads Gainesville In Discussion Of Development Strategies
Next Most K-12 Schools Don’t Teach It, But These Gainesville Students Are Learning to Code