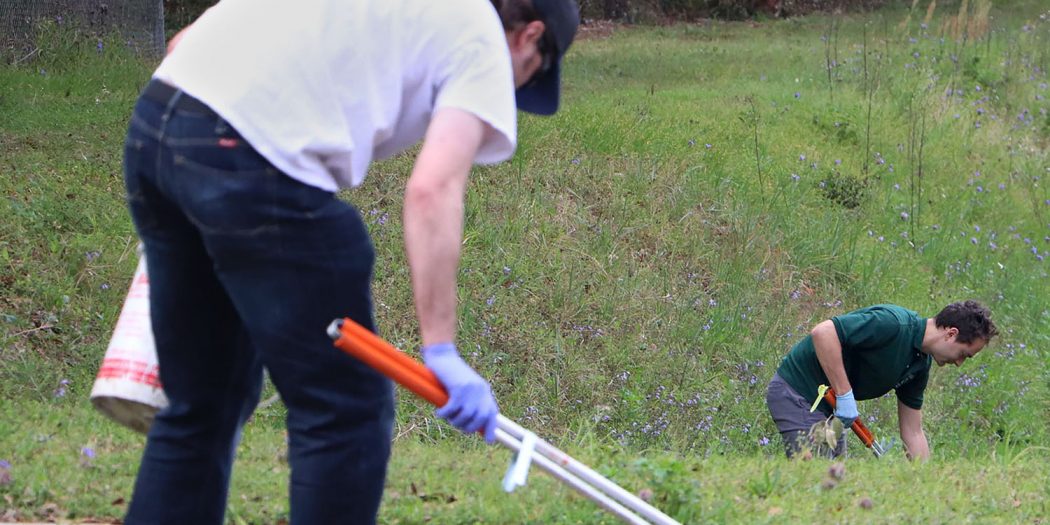 Gainesville got a little cleaner this past weekend as about 160 volunteers collected about 9,600 pounds of trash during the fifth annual Clean Creek Revival, according to Megan Black, executive director of Current Problems, a nonprofit environmental group.

Current Problems teamed up with First Magnitude Brewing Company to collect plastic items, wrappers, tires, and discarded bicycles and mattresses. Their Saturday haul this year was more than all previous years combined.  In 2018, 150 volunteers collected 6,590 pounds of waste, Black said.

Current Problems hosts dozens of waterway cleanups throughout the year, including the Great Suwannee River Basin Cleanup and the Newnans Lake Cleanup.  The nonprofit reported $41,517 in annual operations from contributions, according to the group’s 2017 federal tax documents.

Black noted that the annual Clean Creek Revival is the organization’s widest-reaching event and the largest trash cleanup in Gainesville.

“We have a ton of different UF groups that work with us, different individuals, church groups and after-school groups,” Black said.

The brewery has partnered with Current Problems for the past four Clean Creek Revivals.  The company location, just off South Main St. and south of Depot Park, served as the trash collection site and hosted a daylong festival of music, prizes, and educational activities.

“They are the group that cleans up creeks and have been for the past 20 years,” said Christine Denny, First Magnitude owner and president. “Of course I wanted to work with them.”

Denny sees the collaboration between her business and the non-profit as a win for the environment. Denny previously worked as vice president for Normandeau Associates, an environmental consulting firm that focused on water resources and land management projects.

“We tried to find a balance between the human and nature when managing,” Denny said.

Saturday’s cleanup focused on priority areas and canals along northeast 8th Ave., 15th St. and North Main St.  Blacked noted that about 1,690 pounds of the collection were trash from carpets, tents, and sleeping bags.

Alwin Hopf, a 25-year-old graduate student at UF’s Agriculture and Biological Engineering program, pulled an entire bike from one canal.

“It was really gross, but it’s really important,” Hopf said.

Other volunteers such as Lauren Buschur, a 19-year-old freshman studying chemistry at UF, found plastic bags and wrappers from the creek and surrounding areas.

Black said ground litter must also be removed because rain runoff eventually pushes discarded trash into creeks and waterways.  Waste thrown into the water breaks down into microfibers, a chemical harmful for digestion.

“Our surface water in Gainesville ends up in the ground where we get our drinking water,” Black said. “If you can’t care about litter being ugly, at least you can care about your water being intact.”

Derek LaMontagne, vice president of the UF chapter of the American Water Resources Association, said the state government doesn’t strictly enforce laws and regulations. He said grassroots volunteers help make up for what the state’s laws can’t do.

“The state laws should be protecting our waters, but they’re not completely doing that,” said LaMontagne.

Saturday’s work evolved into an “after party,” as groups deposited their trash in dumpsters at First Magnitude Brewing. Volunteers weighed each group’s trash haul and then served complimentary pizza. Prizes were awarded for the most Styrofoam, the heaviest weight of trash and the most straws.  The prize for weirdest item went to the group who found a parking meter on SE 4th Street.

Sofia is a reporter who can be reached by calling 352-392-6397 or emailing news@wuft.org.
Previous Proposed Florida Bill Would Protect Students From Hazing Deaths
Next Mayor Lauren Poe, Commissioner Adrian Hayes-Santos Celebrate Re-Election