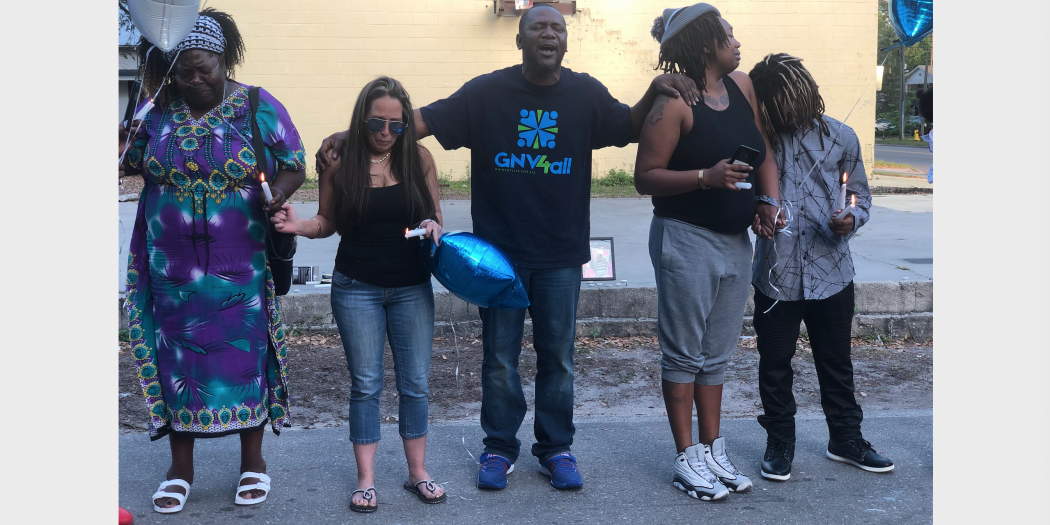 Click above to hear an audio version of this story that aired on Florida’s 89.1 WUFT-FM.

The community gathered near “the slab” at 1704 NE 8th Ave. in remembrance of Montez Davis, East Gainesville’s latest gun violence victim. He was shot and killed outside the Eighth Avenue Food Store Saturday.

Mamie Davis, 33, engaged those who gathered. She said her cousin’s death is tragic, but she said the love from the public softens her heart.

The cook said the community is exhausted.

James Eugene Boykin Jr., 20, was arrested in connection with the murder Thursday and charged with two counts of first-degree homicide and possession of a firearm by a convicted felon. One of the homicide counts is for the attempted murder of a female victim who survived the shooting.

People released balloons. As the red, silver, gold and blue balloons floated away, the pastor hoped they wouldn’t get caught in power lines or trees.

“They would have left here and always remembered the balloons got stuck in that tree, and that would have been a part of them,” Duncan said.

Krystal Lovelace, 34, remembers Davis as a great father. The X-ray technician is the mother of his children, Dontrell, 15, Elijah, 10, and Sariyah, 4. The family is now using a GoFundMe page to attempt to raise $5,000 to cover the cost of his funeral, as Davis was 31 with no life insurance.

“He loved his family and friends,” Lovelace said.

Davis has two more children: a boy who is 10 and a girl who is 4 years old.

The crowd joined in.

Curtis is a member of the Central Florida regional chapter of Don’t Take My Life Let Me Live.

The organization stands against gun violence. Don’t Take My Life won’t be quiet about it.

“We come out on the streets to support, to be in union with victims’ families and just to show love,” Curtis said. “We’re small in number and mighty in force because we don’t stop.”

Moms Demand Action, a grassroots organization that fights for safety measures for protection from gun violence, attended the vigil.

Julius Long, 30, is the founder of Lil Afrika Resource Center. He and Tyra “Ty Loudd” Edwards, a managing member, organized the vigil.

“This is about showing love to our community,” Edwards said. “We are lacking a lot of things in our neighborhoods, but we’re not lacking love.”

The center is set to open this year. The pair hopes to inspire love, mentor youth and provide jobs in the East Gainesville area.

Long said a lack of opportunity often leads to crime. He hopes to help combat it.

LaResia Golden is a reporter at WUFT News who can be contacted by calling 352-392-6397 or emailing laresiagolden11@ufl.edu
Previous ‘Music Was The Only Thing He Had,’ And Police Say It Got Gainesville Rapper ‘Shay Baby’ Killed
Next UF Students Join Farmworkers To Protest Wendy’s