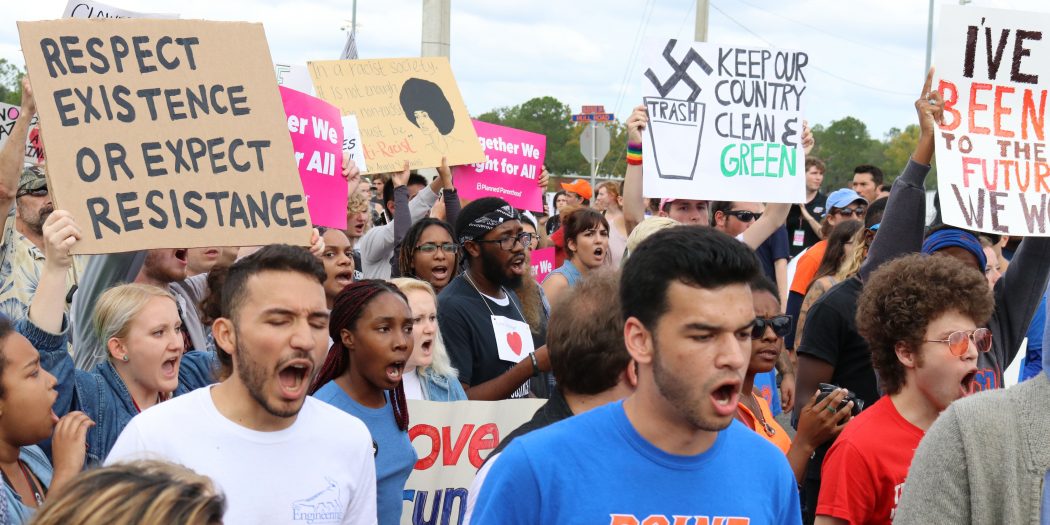 Thousands of people protest at the University of Florida where white nationalist Richard Spencer was preparing to speak, Thursday, Oct. 19, 2017 in Gainesville, Fla. A bill during the 2019 legislative session would create a survey of university students and faculty about political perspectives on state university campuses. (Mercedes Leguizamon/WUFT News)
Home / Education / Florida Lawmakers Discuss Surveying University Faculty And Students About Political Viewpoints

TALLAHASSEE — A proposal that would require Florida public universities to survey faculty members and students about their personal viewpoints was approved Wednesday by a House panel, with Democrats concerned about what lawmakers would do with the results.

Byrd said a number of students have shared with him experiences in which they did not feel comfortable expressing political views in the classroom out of fear that their grades would go down.

“They are real concerns,” Byrd said. “And I think it’s only getting worse.”

Democrats, however, pushed back against creation of the survey, which under the proposal (HB 839) would be administered by the university system’s Board of Governors. The requirements of the survey are broad, but it would need to be “objective, non-partisan and statistically valid,” according to the bill.

If the proposal ultimately passes during this year’s legislative session, the Board of Governors, which oversees 12 universities and more than 341,000 students, would compile and publish the results each year. It remains unclear, however, what the Legislature would do once the data comes in.

“Whoever the future policymakers are will have to address that,” said Rep. Ray Rodrigues, an Estero Republican who is sponsoring the legislation. “Not me, because I am term-limited.”

The debate about the survey overshadowed other provisions in a higher-education bill that includes issues such as revising the performance-funding system for universities. The bill also would require the Florida College System to have a reverse transfer agreement for students seeking associate of arts degrees who want to transfer to state universities before earning the associate degrees.

While Democrats said they liked a lot of issues in the bill, they all voted no largely because of the provision that would create the survey.

Rep. Carlos Guillermo Smith, D-Orlando, said he did not like the survey because it is based on an assumption that there is no intellectual diversity in the state university system. He said that’s not the case, pointing to an appearance in 2017 at the University of Florida by white-nationalist leader Richard Spencer.

“I am worried that the survey itself is a predetermined assumption that our state university system is a collection of liberal institutions that are graduating young people with progressive ideals who go out into the world to promote these ideals,” Smith said.

Matthew Lata, a Florida State University professor and member of the United Faculty of Florida, said he thinks the survey could exacerbate political divides at universities.

“I shouldn’t be forced to tell the state of Florida how I feel about certain political matters,” Lata said.

Lata raised concerns about whether survey results would prompt the firing of liberals or conservatives in an attempt to have balanced viewpoints on campus.

“Let’s say in political science you have 20 people and the survey determines 15 are liberal and five are conservative. Are you going to fire the liberals and hire more conservatives? What would happen?” Lata said.

The proposal needs to clear two more House panels before it could go to the full House. A Senate version (SB 1296), filed by Education Chairman Manny Diaz Jr., R-Hialeah, has not been heard in committees.

How Florida’s Public Schools Have Been Affected By COVID-19

State elections officials will have until June 1 to decide how they want to comply with a federal judge’s ruling that rejected a decades-old Florida law requiring candidates who are in the same party as the governor to appear first on the ballot.