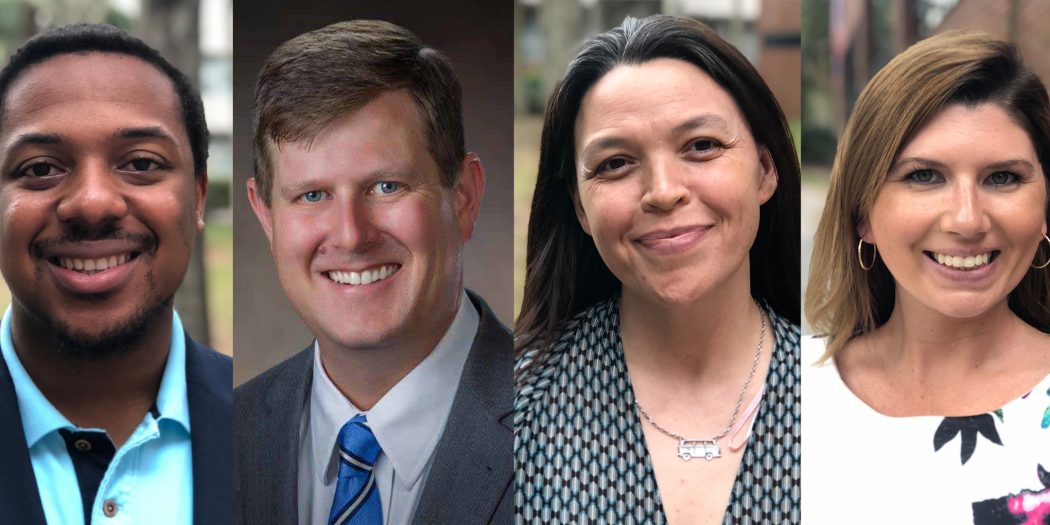 The candidates for Gainesville mayor in 2019 are, from left, Marlon Bruce, Lauren Poe, Jenn Powell and Jennifer Reid.

In just over a week, Gainesville will elect its next mayor. Citizens will decide between four candidates: Incumbent Lauren Poe, Marlon Bruce, Jenn Powell and Jennifer Reid.

Poe has served nine years on the city commission, including the last three as mayor. His challengers are each seeking their first political office.

Whoever is elected will serve as mayor for three-and-a-half years and earn a salary of $41,656.

Citizens registered to vote in Gainesville can submit their ballots early from March 9 to March 16 or on election day, March 19. Residents of district four can also vote for their commissioner.

Though he’s young and has no political experience, Bruce has been a part of Army ROTC, the Boy Scouts and other leadership organizations.

“For my young age, I’ve done a lot in the realm of leadership,” he said. “One of the most important things is to make sure that everyone is heard but you have to stay firm.”

Bruce said he’d be firm in tackling rising living costs head on if elected mayor. One major part of his strategy is to bring more high-paying jobs to Gainesville.

“Our private sector boasts many small businesses and startups, but we’re not really carrying the Amazons, or Googles or JP Morgans. We don’t have any large businesses that are actually paying a living wage here in Gainesville,” he said. “Rather than mandate it, we can allow the market to mediate that by bringing those large businesses to Gainesville.”

Bruce also said Gainesville Regional Utilities needs an overhaul. He said even if rates are lower than they were 10 years ago, the commission still must reduce GRU’s $1.6 billion in debt, possibly by cutting the General Fund Transfer, which supplies about 10 percent of Gainesville’s annual budget.

Central to his focus on progressive values is combating inequity in Gainesville.

“There’s a clear racial and socioeconomic divide that exists,” he said. “How you address those divides ranges from how you provide access to safe and efficient transportation, healthcare, housing, employment opportunities and access to entrepreneurial guidance.”

Some of his strategies for equity have been increasing funding for roads, investing $100 million in historically poor East Gainesville and advocating a living wage for city employees.

He points to Gainesville’s drop in unemployment to 2.9 percent and the 11,000 jobs created during his tenure as evidence of the city’s progress.

Poe has also overseen several victories for environmental protection, including the achievement of 28 percent renewable energy in Gainesville and the recent ban on single-use plastics and Styrofoam.

“The environment knows no wealth or poverty metric. It affects everybody equally,” he said.

Regardless of these marks of progress, some in the city have criticized Poe’s commission for a lack of community engagement. One example came in November, when city hall was filled with people who spoke out against GNV RISE, the commission’s plan to increase affordable housing opportunities.

Due to the backlash, the commission scrapped the plan in favor of a more inclusive approach, which includes a series of ongoing community engagement workshops.

Poe said he knows it will take more than just a few workshops to gauge the needs of the community.

“We’ll be going out into the community and meeting people where they are and we’re not going to be satisfied or bring anything back to the commission until we’ve made sure to hear from every segment of our community and that every voice is heard,” he said.

Jenn Powell, who ran for an at-large commission seat in 2017, is running a grassroots campaign with a focus on equity, accountability for public officials and removing money from politics.

“The system is designed for people like me to not be able to run,” she said. I’m doing it anyway, and it’s hard. It’s hard when you work, you have a family, and you want to do right for the community and these financial obstacles are in the way.”

She believes she’s the best representative for Gainesville’s working class because she has felt those struggles before as a single mother of four.

“I raised a family on next to nothing,” she said.

Powell has pledged to earn the salary of the lowest paid city employee if elected. She also wants to foster a culture in City Hall that welcomes criticism and differing opinions, which she thinks hasn’t occurred under Poe’s leadership.

“Mayor Poe has a tendency to dismiss people who have ever disagreed with him,” she said. “I campaigned for him in 2016, and I thought he was going to be the person to do great things and he’s not delivered.”

Powell said the commission’s handling of the affordable housing crisis is an example of Poe not delivering.

“We have some amazing people, highly educated in these fields who want to volunteer their time to solve the problem, and they’re not being listened to,” she said.

Jennifer Reid, a legal assistant and mother of two, was born and raised in Gainesville. Her campaign is predicated on public safety, fiscal responsibility and reprioritizing what she calls the city’s core issues.

Her campaign slogan is “Let’s get back to the basics.”

“We should really be looking at what best interests our community for today before we can focus on our future,” she said.

Reid said the best way to do that is to have more open forums for citizens to voice concerns. Though she said commission meetings and engagement workshops are great, she wants to see more segments of the community involved in decision making.

Reid sees herself as a “servant leader,” and feels she will listen to citizens instead of just hearing them.

“I’ve got this grit to do things,” she said. “Whoever I devote my leadership to is very much taken care of.”

Jacob is a reporter for WUFT News who can be reached by calling 352-392-6397 or emailing news@wuft.org.
Previous Belleview Toddler Becomes Ambassador For Down Syndrome
Next The Point, March 11, 2019: Early Voting To Decide Gainesville’s Mayor, City Commissioner Seats Has Begun